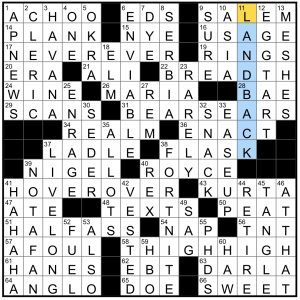 Hey besties, I’m subbing in for the inimitable Sophia while she’s on vacation. I was surprised to see Erik’s name when I opened this puzzle! I couldn’t remember solving a themed puzzle by him in the Times– I actually fact-checked this, and his last one was a collab with Andy Kravis in September of 2020. I had just started solving then, and would not have registered his name. (I think I didn’t read bylines back then, actually.)

All four of today’s theme answers are repeating two-word phrases, save for the first letter. This made me think of one of my fave tweets from crossword-er Parker Higgins, which discusses that type of repetition, but with the first and last letter being excluded.

This is a simple theme, which can be polarizing. Do you think it’s nifty and elegant, or do you think it’s boring? I am much more interested in letter-patterns than puns, so this type of theme is right up my alley, but maybe you were hoping for wordplay and felt disappointed. Sound off in the comments.

When Jeff on xwordinfo reviews a puzzle, it’s very important to him that the theme answers in a puzzle are unique. He likes when he thinks hard about the gimmick and can’t find any other phrases that fit the pattern. I don’t care about that at all. All that matters to me is that they are interesting, and I thought these four were great. I spend all day HOVERing OVER things, and recently bought a pair of deliciously elegant THIGH HIGH boots.

The low word-count (74 words on a Monday puzzle!) meant that there was a ton of 6-, 7-, 8-letter fill. I think it’s so interesting how some mid-length words can be boring (RETIRE, BREADTH) and some can be evocative and delightful (HAVANA, EGG TART, FORTNITE).

Three thoughts before I leave you:

The revealer is BEEF (56d, [Complaint, or a hint to the grades that start 20-, 32-, 40- and 53-Across]). The other theme entries are familiar phrases whose first words are USDA grades of BEEF. 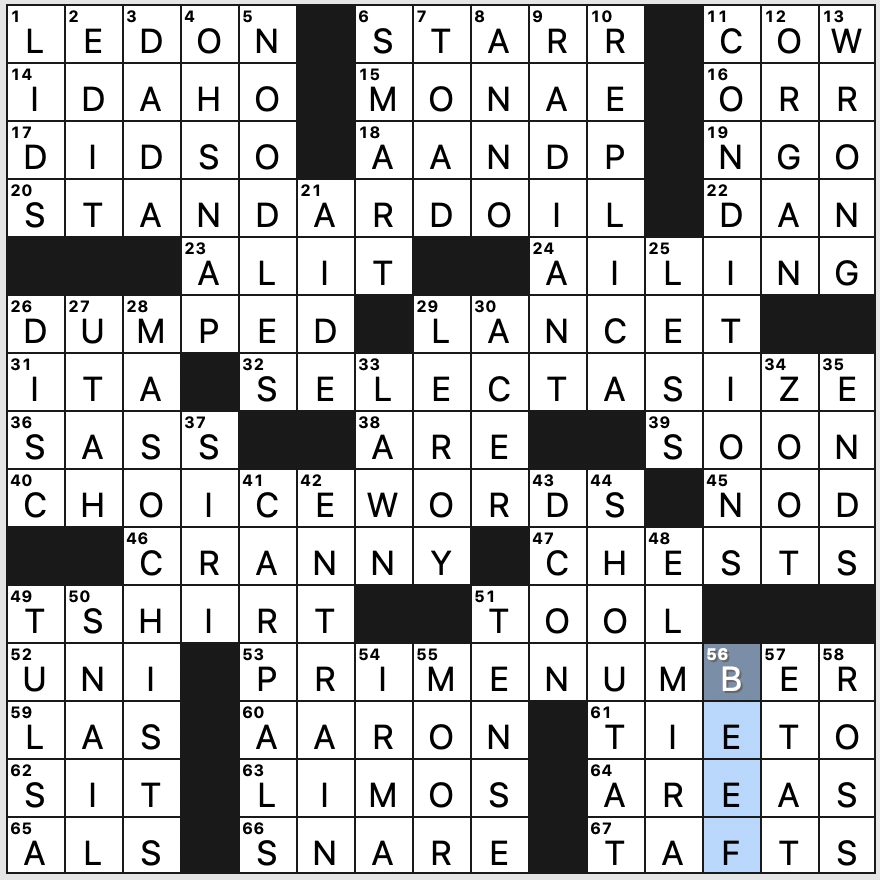 I definitely needed the revealer to make the connection. I don’t know that I’ve ever seen standard grade BEEF in supermarkets—at least nothing that was labeled “standard.” Doesn’t seem like it would be a strong selling point.

Nice choices of theme entries. I especially liked SELECT-A-SIZE (even though I miss my old normal sized paper towels; can’t seem to buy them anywhere any more) and CHOICE WORDS.

Top fill: CONDITIONS, MASOCHISTS, The LANCET, and “OH SNAP!” Not thrilled about A AND P and weird ENTRAIN. But all the crosses were fair. 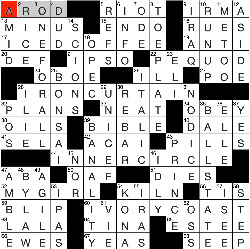 Today we have a simple initialism theme, with a revealer at 57D [Words of comprehension, and a phonetic hint for the answers to the starred clues], I SEE, that tells us that all the theme answers are two-word phrases with initials I.C.

Can’t say I noticed much about the fill, either highs or lows. 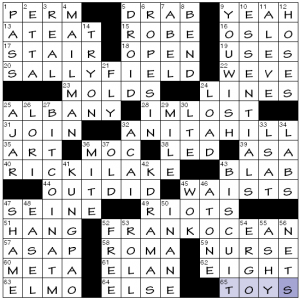 A fitting title for an apparent début, no?

Theme is celebrities whose surnames are geographical features.

This sort of theme has certainly been done before, and this is a mostly solid rendition. 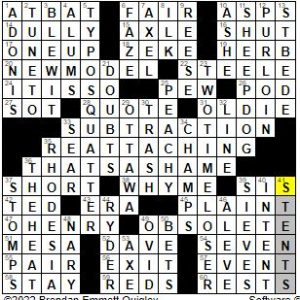 Hello from Joshua Tree, where I’ve got a few days at my favorite place in the world :). Couldn’t get the .puz to download, so solved this one on Brendan’s site and hooboy. I am a paper solver who tolerates .jpz and .puz files in XWord (my preferred solving program) to save time printing puzzles, and this Crossword Compiler embed is not for me.

Anyway, classic staggerstack pattern here from Brendan, and a nicely medium challenge this Monday. The trend in these types of grids has been to flash your marquee entries across the actual stairstack, but I found most of my enjoyment in this puzzle in the connecting downs that bridge the middle to the rest of the puzzle. TYPO SQUATTER [5d Person registering a comical domain name similar to the original] is a classic BEQ entry for the so-called extremely online among us. Clever businesses will buy up URLs with common typos from their actual site name, but things slip through. Of course, I rarely navigate to websites by typing in the url anymore anyway, so maybe the age of TYPO SQUATTERs has passed us.

The corresponding long down is a sport entry that’s pretty trivia-y on its face, but there’s a lot of crossings to get and help a solver infer [23d Randy Moss or Anthony Muñoz, notably, in the Super Bowl] TWO TIME LOSER. Moss was on the 2007 Patriots team that lost to the New York Giants after an undefeated regular season and (in his final year) the Colin Kaepernick-led San Francisco 49ers who lost to the Baltimore Ravens, while Muñoz was a dominant offensive lineman in the 1980s with the Cincinnati Bengals who lost to the 49ers twice.

Other clue/entry combinations I quite liked: [11d It has a peekaboo hairdo] for SHEEPDOG, a bit of today-I-learned trivia at [29d Capital originally called Bytown] OTTAWA, and [13d Monastic scholar who popularized the “anno domini” system] ST BEDE.

That’s all from me. Have a good Monday! 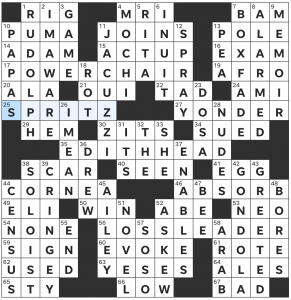 Cute title! The final word of each theme answer is a synonym for “boss.” I had not heard of POWER CHAIR or LOSS LEADER, though both were easy enough given the clues and the theme. EDITH HEAD has been in my, er, head, because me and my friend recently went down a rabbit hole of People And Things That Have Won Many Oscars.

This is an ambitious layout, with those chonky corners. I am in awe of how they filled it so smoothly, even with tough letters like J, Z, and X. I think the only entry that gave me pause was ALA, which I don’t really buy as an abbreviation for Alabama– it’s just AL, right? (Feel free to say “Malaika You Are Wrong” in the comments.) Fave entries for me were RUDOLPH (clued as Maya, she was so good in “The Good Place”), JACUZZI, CRINGEY, MOCHI, and MEMOIR. 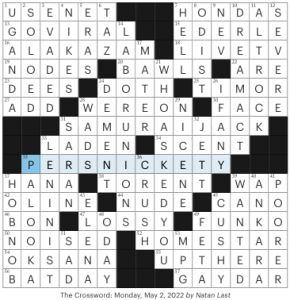 The day got away from me before I remembered blogging. So! On with it.

Similar grid to a recent Brooke Husic one, with long answers intersecting in the middle and throwing off pinwheel corners. Great flow. This one did not feel anywhere near hard enough for a Monday New Yorker.

24d. [Deprive of reason, archaically], DEMENT. Is an archaic word really a better choice than singer Iris DeMent? The crossings should have gotten solvers there with an Iris clue.

3.5 stars from me. Disliked more of the fill here than in most of Natan’s grids.