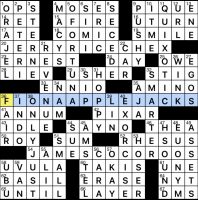 This week’s theme is a before and after-type combining celebrities and breakfast cereals.

The theme is cute, but I would love to see some newer celebrities here. Jerry Rice retired in 2006 and James Coco died in 1987. Fiona Apple released her latest album in 2020, so she’s good. (I recommend listening to her single “Shameika.”)

Speaking of cereal, did you know (among other things) Jamelle Bouie reviews weird breakfast cereals for Serious Eats? Here’s one of my favorites, a review of Green Onion Chex from Kellogg’s South Korea. I wish I could embed this here but you’ll just have to trust me and click the link. Please trust me. My office staff is wondering why I’m cracking up by myself at my laptop. 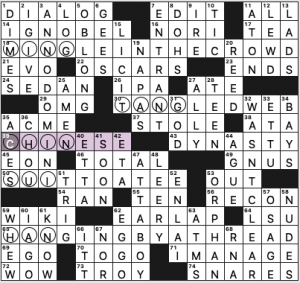 Our theme revealer does double duty here. 39a. [With 43-Across, historical period found in each set of circled letters] clues CHINESE / DYNASTY, and the first four letters are circled for the Chin dynasty. The Ming, Tang, Sui, and Han dynasties are hiding at the starts of MINGLE IN THE CROWD, TANGLED WEB of lies, SUIT TO A TEE, and HANGING BY A THREAD. Those long ones have 16 letters, so the grid’s wider than usual. 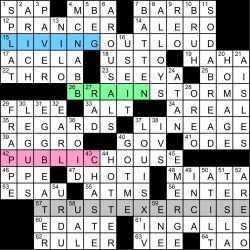 Hello friends, and hello to you, month of May! Here is hoping you are all doing well to begin the new month.

Today’s grid is making sure there are no trust issues lingering after your solve, as each of the first words in the first three theme answers can come before the word “trust.” The fourth theme entry, TRUST EXERCISE, acts as the reveal (57A: [2019 Susan Choi novel that won the National Book Award for Fiction…or an alternate puzzle title]).

It was one of the shortest answers that ended up causing me the biggest hangup, when putting in “me to” instead of US TO led to what looked like a 10-car pileup in the middle of the grid that I had to untangle out of (18A: [“Take ___ your leader”]). Guess I only envision one solitary alien being present when making a request like that in wanting to take over our planet. New word/person of the day for me was NILO, the first Latino to ever win a drama Pulitzer when he did so for Anna in the Tropics (13D: [Pulitzer-winning dramatist Cruz]). We’ve seen “sarong” and “sari” in puzzles a number of times, but I believe this is the first time that I’ve come across DHOTI in a grid (47A: [Hindu garment]). Almost some interesting timing with one of the answers, the Sun King himself, LOUIS XIV, as it is one of his descendants, Louis XVI, that is the eponym for the city of Louisville, which is hosting the Kentucky Derby at the end of this week (37D: [French monarch with a 72-year reign]).

“Sports will make you smarter” moment of the day: MCNABB (4D: [Former Eagles quarterback Donovan]) – Here’s a little known fact about Syracuse University’s Donovan McNabb, the greatest QB in the history of the Philadelphia Eagles franchise (sorry Norm, Jaws, and Randall). During his time as a standout quarterback at Syracuse, McNabb, who was a two-sport star in high school in Illinois, was also a member of the Syracuse University basketball team, including the 1995-96 team that made it all the way to the national championship game before losing to Kentucky. His senior season at ‘Cuse saw him finish in fifth place in the Heisman Trophy voting. Of course, because my timing is always horrible, I arrived at Syracuse as a freshman soon after McNabb’s college days ended. 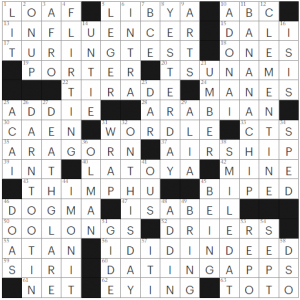 Despite using the not-100%-smooth-for-me web interface (I can never get Crossword Scraper to deliver a usable file at The New Yorker) and a casual approach, my time for this was on the fast side for a “moderately challenging puzzle”. About 5½ minutes.

No marquee answers in this grid. There is a pinwheel of double-stacked tens, and they’re all good: INFLUENCER/TURING TEST, BANANA CHIPS/CLEMENTINE (clued via the brand name Cutie), I DID INDEED (which is gettable from the precisely phrased clue)/DATING APPS, DARN TOOTIN’/DEATH GLARE (for which I originally had DEATH STARE—my only misstep).

A very smooth grid and a satisfying solve.

This was a smooth solve. I didn’t figure out what was going on with the theme until I got to the revealer. Then again I didn’t try very hard because I was solving the puzzle.

Each theme answer has circles. 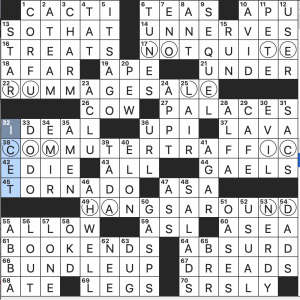 I realized the circles were NOTE, RULE, COMIC, and HAND. I didn’t see the connecting thread until I got to 61a [Items found on library shelves, and what are literally found in each set of circled letters]: BOOKENDS. NOTEBOOK, RULE BOOK, COMIC BOOK, HANDBOOK. Nice! Solid, consistent, accessible.

What I didn’t know before I did this puzzle: see above re: CORFU and the Ionian Sea. I also didn’t know that ICE–T had a song called “Rhyme Pays.”

I like a good imaginative theme. This one involves phrases that include animals to describe people involved in nefarious doings. They’re clued as though they are groups of lawless critters escaped from a zoo. 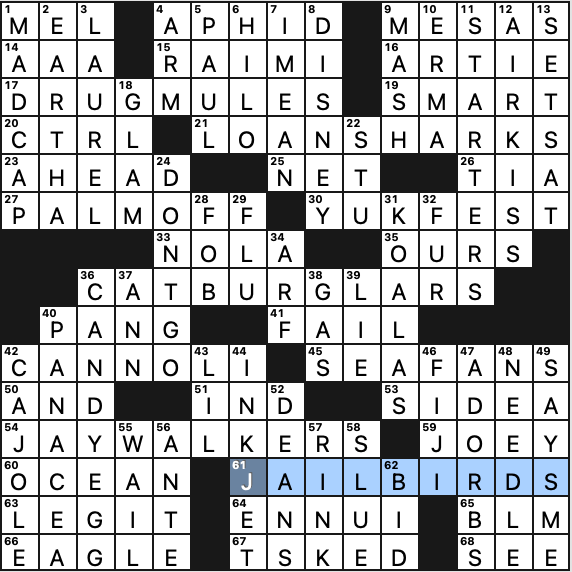 This was fun, although I have to say the use of animal groupings threw me off. Except for the first one, they were no help in identifying the animal in question. I would have liked it better if the clues offered a hint to the illegal activity involved, such as […the ___ were stealing everything in sight] for CAT BURGLARS (or something better). But still, I enjoyed it.

Really impressed with the fill as well all over the grid including AIR KISS, CANDY EGG, STARTERS, PANACEA, CAJOLE, MADCAP, PALM OFF, YUKFEST, CANNOLI, SEA FANS, “SAYS ME,” and “DON’T GO!” Lovely stuff to uncover at every turn. Only SETS AT made me wrinkle my nose.

The revealer is right in the title!

THEME: Common phrases where both words can precede the word “time.” 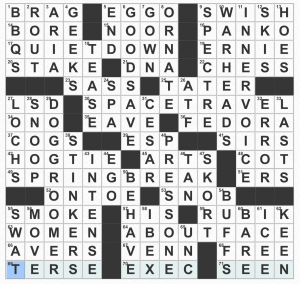 I know this is a common idea, but I’m always impressed when solid two-word phrases can be found where each of the words can precede a common word. That said, it’s also hard to make sure that they all fit perfectly without a bit of shoehorning. Like “good time” on its own doesn’t feel right (“good times” feels fine… good time sounds like it needs to be part of a longer phrase). I suppose I’ve heard the phrase “break time” but that feels off too. And I don’t know what to make of either “space time” and “travel time.” I might be missing something there.

I found the GOOD SAVE placement rather intriguing. Totally unexpected. Can’t tell if I like it or not… just gave a verbal shrug when I came across it.

Fun clue for TERSE: [Unlike this clue, which is far too wordy and could have simply been “curt”]. Sometimes the meta clues induce eye-rolls. Sometimes they’re just plain delightful. This was the latter.

Had DOG TRAINER for DOG GROOMER, which would’ve worked fine, had the clue been without a ? [One who makes a boxer look smart?]. That’s a very good clue and misdirection. Bravo!

Another good one for [Big name in cubism?] RUBIK.

Overall entertaining, even if the theme wasn’t always spot on.

Loved everything about today’s puzzle! So good! 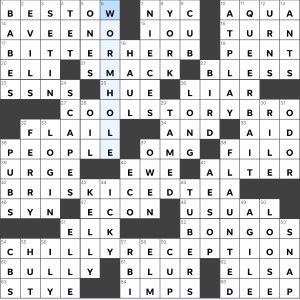 Theme: each themer begins with a synonym for the word “cold”

Such a fun theme and themer set! “Seder” should have clued me in more but my mind was rotating through different descriptors such as “harsh”, “pungent”, and “hot” for BITTERHERB but once I had a few crossings, then this one practically finished filling in itself. COOLSTORYBRO also took me a few crossings to get and while I certainly have used this phrase before, it in no way describes my response to this puzzle if you can’t tell (sorry, not sorry, for all of the exclamation points throughout this post). This one frustrated me most of all because I used to drink BRISKICEDTEA a lot, was even picturing the can image and could taste it from memories but missed the first word so doubted what it was for a while until more of the puzzle was filled. Cluing had me thinking “cold shoulder” yet with this being the final themers, I had firgured out by then what was going on so it was easier to fill in CHILLYRECEPTION. Also there are a couple of alternating patterns: one with the starting letter—the first and the third begin with a “b” and second and fourth begin with a “c”, and a second with the number of words in the themer—two in the first and fourth, and three in the second and third. So many things going on! Super cool to see pulled off and so well too!

Stumpers: ALTER (tried “edits”, “redo”, and “amends” first), AQUA (needed crossings, stuck on either “teal” and “cyan”), and ILY (got with crossings)

When I opened my USAT app, I was delighted to see it was by Sara Cantor and the puzzle did not disappoint! An excellent way to start my Tuesday, and hopefully you all enjoyed it as much as I did. A well-deserved 5 stars from me today, especially knowing how tricky this all must have been to achieve and maintaining such great fill. Kudos, Sara!