Happy weekend, all! I hope you’re doing well. If the news from SCOTUS this week is hitting you particularly hard, I hope you’re finding ways to cope, connect with others, and tend to yourself.

One way I’m doing all three is by tackling today’s lovely Sunday NYT, a double-up from two star constructors. Let’s see how much they double down on their theme: 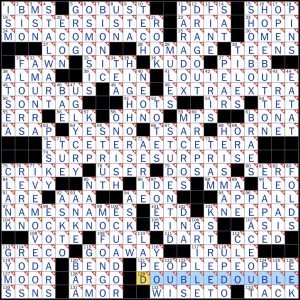 Wow! Each theme entry is a very common, in-the-language phrase consisting of a doubled word AND the theme pairs are doubled up. That’s quite impressive, especially since stacking each pair of themers certainly made for a tougher job building this grid, but I didn’t notice the theme impact the fill much as I solved. Bravo to the constructors – it’s fun, elegant, simple but effective themes like this that make me want to try my hand at making a 21x one day. And I’ll assume their original revealer clue referenced the In-N-Out Burger classic, if only because I’m a Californian at heart.

Other random thoughts:
– 36A: KUDO [Singular praise] – Wait a minute, KUDO again?? Is the NYT trolling us?
– 61A: BONA [___ gratia (in all kindness: Lat.)] – This entry in this puzzle made me smile, since Matthew Stock is easily one of the kindest people in crossworld!
– 20D: ECON [Subject of interest, in brief] – This was cute.

That’s all from me for now. Be well and be kind (especially in the comments section).

No theme on this Mother’s Day! Plenty of fun stuff to uncover though, with some great clues along the way. 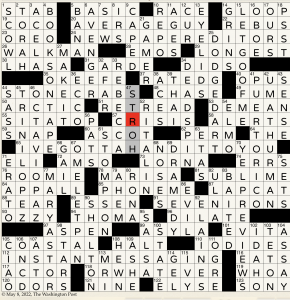 A little throwbacky at times with ELYSE from Family Ties listening to BOOKS ON TAPE on her WALKMAN before she knew she could simply burn them ON CD.

And one section that was irksome for me was name heavy. I mean, I sussed it out just fine, but I didn’t find it as enjoyable as the rest of the puzzle. It’s over in the west with TRINI LOPEZ, OCTAVIO PAZ, MARY ASTOR, ELI Roth (okay, that one was a gimme), and GAIL Devers about to share breakfast after using an OMELET PAN. That last entry was clued vaguely [Diner cookware item], so it didn’t offer much help to me over there.

I enjoyed this one overall. I think it’s a difficult task to make a 21x themeless that’s challenging, accessible, and entertaining throughout. Evan pulled off his 19th one just fine.

And just so it’s stuck in your head too:

Happy Mother’s Day to all you moms and mother figures out there! I hope part of your day involves putting your feet up with a crossword in one hand and a mimosa in the other.

Our theme today involves reality shows whose final words get anagrammed into something else. The result is an “unreality” show, I guess.

I’ll tell you up front that I’m not much of a reality show watcher, and I’ve never even heard of some of the shows referenced below. But I like the premise here of taking actual names and anagramming them into “unreal” shows. 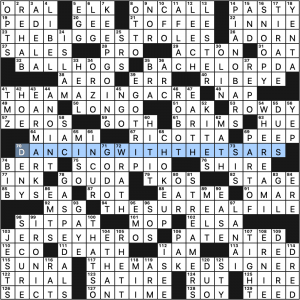 So the theme wasn’t really up my alley, but I certainly enjoyed the fill like “WHERE AM I?,” “KEEP GOING,” EGO TRIP, CHOKE UP, EARMARKS, PIANO BARS, GAS PEDAL, BALL HOGS, SNOOPY, festive STREAMERS, “THAT SO?,” SCORPIO, both BERT and ERNIE, and RICOTTA.

And that reminds me that we made RICOTTA fritters the other night—not with this recipe, but close enough—and served them with a simple arugula salad. It was yum.

Clues were quite straightforward; I didn’t spot a single question mark outside of the theme clues. I guess that helps make for a non-sloggy solve, but I like at least a little bit of trickery in the cluing. Anyway, summing up, the theme wasn’t for me, but the fill was quite sparkly. 3.5 stars.

I guess “Themeless Sunday” is a fixture now? I’m cool with that! It doesn’t seem like it was given the same pomp as “Themeless Saturday” as far as an announcement goes. Also, I’m not sure why it gets a different title. On Saturdays it’s Universal Freestyle. 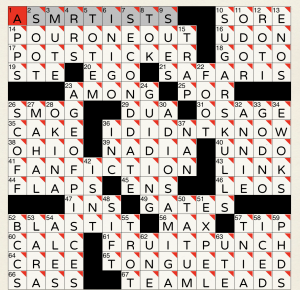 I admit, I usually brace myself for stumbling over some spots when I see this constructor’s name in the byline. OKINA was rough for me, especially because I read the crossing “dessert” clue as “desert” and didn’t stop to wonder why a quinceanera would take place in such an arid land. So that K… I had to run the alphabet. Doh! T’NIA Miller was outstanding in the excellent series The Haunting of Bly Manor, but I needed every cross. Brian LARA, NADIA Murad, NAN Goldin, and DUA were other new entries for me.

Overall, I never got a strong foothold, so sometimes felt like a bit more of a grind than I’d prefer. But still full of happy-to-learn-that stuff.

Theme: Together, the last letter of each word in the theme answers spell out LEG, putting LEG at the END. 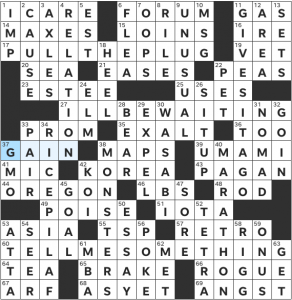 This was a tricky theme to spot for sure, so it didn’t play into my solve as much. I think it’s such a clever use of the word LEGEND though. It definitely wasn’t the map legend or story legend motif that I was first expecting when I opened up the grid. The themers were all really great, and, as usual, I enjoyed that TELL ME SOMETHING was that perfect fifteen to plunk into place. It does also make obvious that this grid is asymmetric since there is no twin grid spanner.

Overall, this was solid Sunday and kickoff to my week! 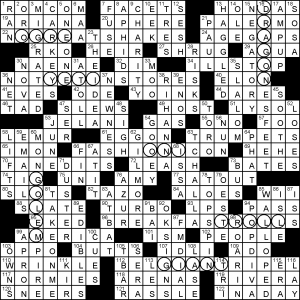 Well, I suppose since Samhain was last weekend, it’s kind of timely for me at least to get a “Monsters Incorporated” theme. Matthew Stock’s puzzle features circles that spell out mythological beasties from a wide variety of cultures. ONI may be the least familiar to Euro-Americans, being Japanese demons. Wonder if Mr. Stock tried to work in a WENDIGO?

Overall, the puzzle played easy, but it sure felt there were quite a few difficult clue/answer names in the puzzle: