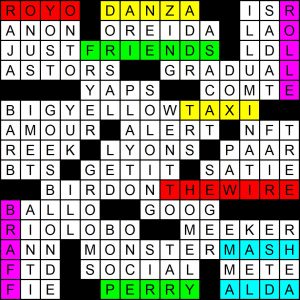 Title: “Watch It!”
Prompt: There are two valid answers to this puzzle’s meta – a hit song from 1970 and a different hit song from 1999. Each gets you partial credit – send in both (separated by a “/”) for full credit.
Answer: “For the Good Times” by Ray Price and “No Scrubs” by TLC

Just 340 right answers with 30 minutes before deadline, so, as happened last month, I zeroed right in on this one but it was no gimme for many solvers.

First thing I noticed during the solve was the handful of clues beginning with the words “TV actor/actress”. They were:

The order I’ve listed these in is “clockwise,” and you can see that this sestet is placed symmetrically around the edges of the grid, so clearly we’re on the right path. I was momentarily distracted by the clue at 40-A: [TV host between Allen and Carson] for Jack PAAR, but decided that wasn’t part of theme even though it begins with “TV” since the next word wasn’t “actor” or “actress” plus it ruined the symmetry of the others.

What next? Well, we do have four standard-length theme entries in the grid in addition to our six TV actors around the edge, so let’s look there:

17-A: [Song by Virginia to Vegas with the lyric “And you’re telling me you wanna kiss me / But we shouldn’t ’cause we’re …”] = JUST FRIENDS. Unfamiliar with this one but I live in Virginia and have been to Vegas twice.

27-A: [Joni Mitchell classic that was also a hit for Counting Crows] = BIG YELLOW TAXI

47-A: [Leonard Cohen signature song] = BIRD ON THE WIRE. I knew this was a Cohen song but I’m more familiar with the hit Aaron Neville version of the late 1980s, which was “Bird on a Wire.” Apparently a number of artists who’ve covered it prefer the “a” over the “the”.

How to connect these? The first one I noticed was FRIENDS and Matthew PERRY, the show on which he was a star. Aha! So we’re finding a hit TV show at the end of the four theme entries, then linking it to one of its stars on the edge:

What’s left? Zach Braff was famously on SCRUBS, so the 1999 song is obviously (if you’re my age) TLC’s “No Scrubs,” once sung by Meadow Soprano in the family kitchen.

The other one I had to Google; easy enough, since you know you’re looking for a 1970 hit whose title ends with the words “Good Times,” since that was Esther Rolle’s big show. Turns out it’s “For the Good Times” sung by Ray Price, a name I’m not familiar with though it was a #1 country hit and also a #11 hit on the pop charts.

Fun meta, and I’d be interested to hear where solvers got tripped up since it seemed straightforward to me.