Hey, everyone: this is Conrad. I just finished teaching the fourth day of a six-day 8AM-7PM bootcamp in beautiful San Diego, so this writeup will be shorter than normal. We’re looking for a chemical element this week.  There were four long across entries. I noticed that each contained a four-letter word with “TO” in the middle.

I figured that the TOs needed to GO (and be replaced with something else), looked for a pattern, didn’t see one quickly and… went to bed. I checked again the next night after class and saw it: the grid contained 4-letter entries beginning and ending with the same TO words: 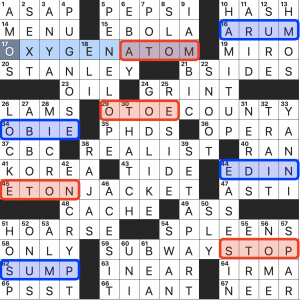 The swapped letters spell RUBIDIUM, our contest solution. I just created the image to insert into this post (right before the posting deadline), and noticed that all of the entries are symmetrical, with the mapped entries nearby to the right/left of the theme entries. Elegant construction, which is no surprise considering Matt and Peter teamed up. I don’t have time to come up with a meta-thematic song, so I thought I’d end with the Pine Walk Collection, a.k.a. the Fire Island Mix Tapes, whose story I found fascinating. Here’s Just for Fun, the opening track from Hot Night, December 1979.