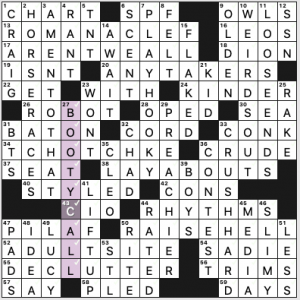 Well, that’s annoying! I figured out a clever clue, and that was my favorite part of the puzzle but I failed to notice that I needed to change that B to a C. I’d had BIO for 43a. [Data head?], figuring the prefix BIO worked there, and then when I realized 27d. [Summons before congress?] was about sex rather than House committees and the answer was BOOTY CALL, I left it as BOOTY BALL, which is not (to my knowledge! afraid to google that) a thing. Chief information officer, CIO. Oof.

Other fave fill: “AREN’T WE ALL?” and “ANY TAKERS?”, KID crossing German KINDER, TCHOTCHKE referenced in the DECLUTTER clue, LAYABOUTS, RAISE HELL, “AMEN TO THAT,” PLAY HOOKY, WEIRDS OUT, and CRUSH HARD (I feel like “crushing” as the verb for having a crush on someone is a newer usage—when did that kick in?).

I didn’t notice the diagonal axis of symmetry till well into the blogging process. A grid that accommodates 16 long entries (9-10 letters)? Yes, please! I’ll take more of these.

Love the play on words in the title. The revealer is THE SPINNERS (57a, [Band that sang “Then Came You” with Dionne Warwick, or how you might refer to 17-, 27- and 44-Across?]). The other theme answers are people who spin things. 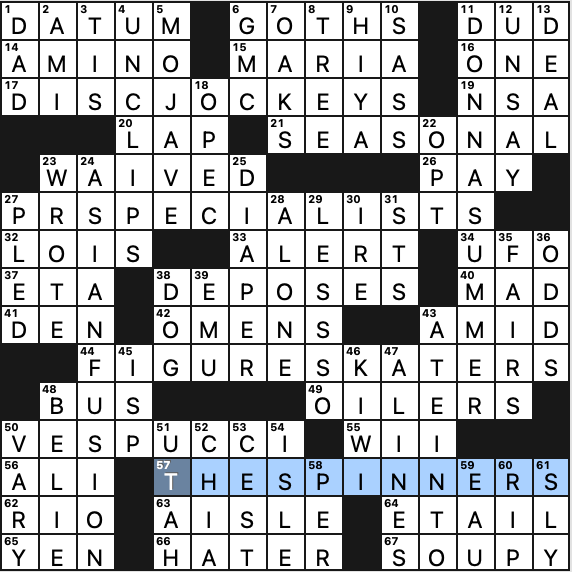 A nice set that kept me in the dark until I uncovered the revealer right at the end. Made for a fun aha moment.

Keeping with the ’70s musical theme, we have DONNA SUMMER as a highlight in the fill along with fun ASIAN FUSION. Also good: Amerigo VESPUCCI, MOJAVE Desert, and DIAPER with a fun clue [Changing requirement?].

Nice puzzle all around. Four stars. 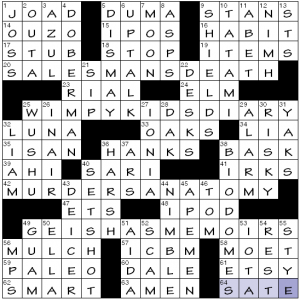 The byline may seem familiar to you, as Fatsis was behind the 2001 Scrabble documentary Word Freak, but this is possibly his crossword constructing début—his name isn’t familiar to the tags in DoaCF’s collective memory.

The conceit—or should I say twist?—here is taking literary titles in the format “X of a Y” and condensing them via rearrangement to Y’s X.

I appreciate how these are presented as different formats (play, book series, film, novel) although a diversity shortcoming is that they’re all authored by white men, but hey that stuff happens, we know. 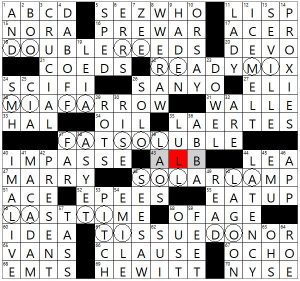 Our seven (!) theme entries cycle through the solfege musical notes, two to an entry and helpfully highlighted by circles. The 16×15 grid does well to manage those themers without getting too gummy. I love the cluing angle for ABCD [1a Snippet sung to the same tune as the lyrics “Twinke, twinkle” and “Baa, baa, black sheep”], as that’s an entry that I’m rarely eager to see. Otherwise nothing really jumps out to me, and I’ve had a brutal week, so think this is it for today. Have a good weekend!

Theme: Each theme answer ends with a breakfast item on the right side. 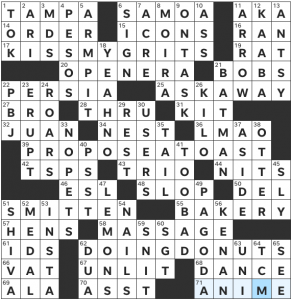 I was pumped up when I saw the title of this puzzle, and I was not disappointed. These were really fun theme answers. I don’t know that I’ve heard KISS MY GRITS, but it also sounded familiar as soon as I filled it in. PROPOSE A TOAST and DOING DONUTS were both so fun, and I definitely am all ready for someone to make me breakfast.

This was a great grid. I had a few stumbles. In particular, I got snagged up for a bit at the intersection of 64d [“Channel with old movies”] TCM and 71a [“‘Yuri on Ice,’ e.g.”] ANIME, though I should have intuited the M more quickly. It did not help that I was emphasizing the “A” in my head as I cycled through answers, making it seem like ANIME was pronounced A NIME. Eventually, I realized the error of my ways.

A few other Friday faves:

I was smiling throughout my fill; this was such a great puzzle. Anything that is food-themed has my immediate undying affection.

Anagrammed novels made for a fun puzzle today, with each themed answer anagrammed within the clue for the entry. 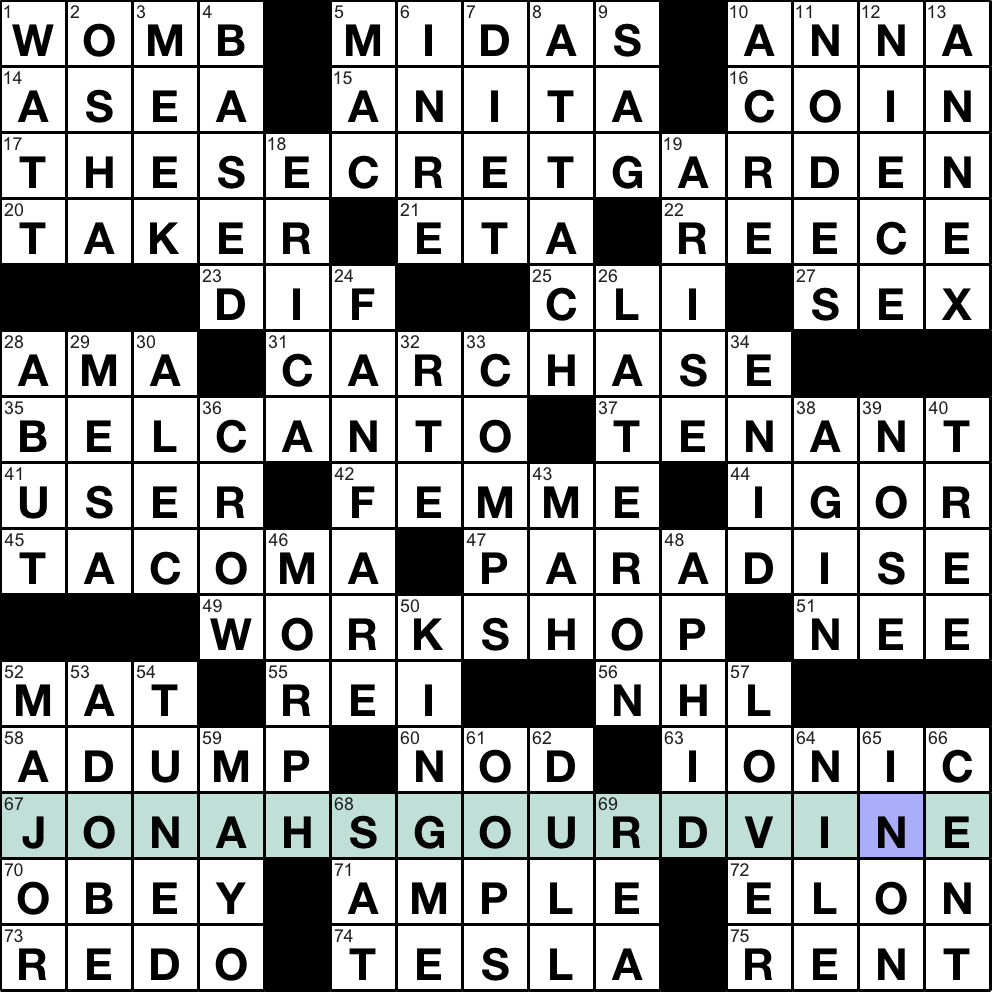 Fun cluing throughout the puzzle, and I definitely got a kick out of seeing ELON and TESLA so close in this grid clued as [University in North Carolina] and [Magnetic induction measure].

This song has been stuck in my head since seeing 36-Down, so here’s some Sheryl CROW