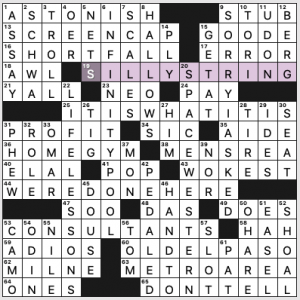 That’s two days in a row with fresh, fun NYT themelesses! I wouldn’t object to a sterner challenge in the Saturday puzzle, but I’ll take fun, sure.

Fave fill in this 70-worder: SCREEN CAP(ture), SILLY STRING, “IT IS WHAT IT IS” (I’m old enough to remember when people rarely said that before Britney Spears broke it wide open), HOME GYM, “WE’RE DONE HERE,” OLD EL PASO, LIFE LESSONS, INFINITY POOL, SPACE WESTERN, and “SORRY I ASKED.” Though the clue for that last one feels off target to me: 9d. [“Oh, never mind – you clearly don’t want to talk about it”] feels quite polite, whereas I’m hearing a snippy, dismissive “SORRY I ASKED!”

Four stars from me. This one was much easier for me than Ada’s AVCX+ themeless on Thursday, which had a few whippersnapper references that weren’t in my wheelhouse. 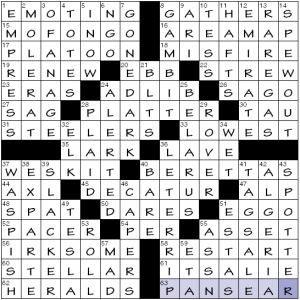 This distinctive grid, roughly quincunx-shaped, proved not to be so intimidating once I engaged with it.

I puttered and sputtered around at first, but eventually was able to make some inroads in various sections: a longish word here, a cross or two there. Before I knew it, a good half-to-two-thirds was complete, and it was time to start working on the endgame—exploring the remaining glades among the forest of answers.

Fortunately I was able to make short work of those areas too, with some artful guesswork and logic. Final square for me was the crossing of 19a [Take over] RENEW and 5d [Start of a final rite sentence] I NOW. The latter seems to be the final exchange in a wedding ceremony, not one’s last rites before being interred. Not sure I understand the across one. 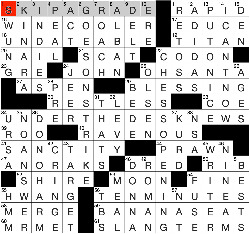 This puzzle is a little oversized — 16×15 — but also clued harder than any of the previous Patti-regime themelesses. I’ve been clamoring for a Saturday that would take me more than three minutes since her first day, and now that I have one I’m not entirely sure how I feel about this puzzle.

I wasn’t crazy about RETOSS and the cluing of a few entries with trivia references that could’ve been wordplay, like [Laurel and Hardy producer] for ROACH, [“Succession” sibling] for ROMAN, and do we get to call OH SANTA a “hit” if its peak position on the Billboard Hot 100 was…100? But, and yes, this makes me feel like a cranky old lady, I felt like a TikTok segment (UNDER THE DESK NEWS) was more something I’d feature as a central entry in a themeless for an indie outlet, not a mainstream market. At least the clue, [Current events TikTok segment that V Spehar broadcasts from their office floor] provides plenty of confirmation to the solver that you’ve got it right.