Theme: The letters PH (making the F sound) are added to familiar phrases with additional spelling changes as necessary. 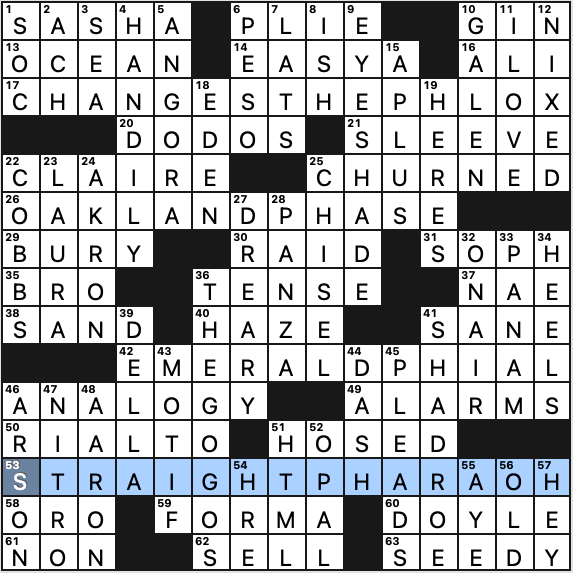 It certainly is consistent, but I find it odd to add specific letters (PH in this case) but then make additional spelling changes phonetically. But then again, there just aren’t that many words you can add PH to and still have them be actual words. (They do exist, however: lox->phlox, aid->aphid, one->phone, deli->Delphi.) In the end, I don’t mind this because it avoids any jarring pronunciation changes, and the spelling changes add just a little bit to the challenge. None of these made me LOL, but they’re solid enough. Too bad we didn’t get to see the grid-spanning entry PHALLUS IN CHAINS. That would’ve made me LOL.

In the fill we have an EYESHADE, THE GO-GO’S, an ANALOGY, SHAD ROE, and Sancho PANZA. 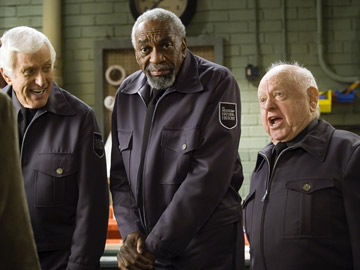 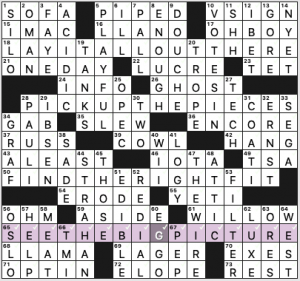 Love life seen through a jigsaw puzzle lens? Works for me! I do jigsaw puzzles both on a tabletop (usually 1,000 pieces) and on an iPad (with an app called Jigsaw Puzzles for Adults HD, which is not as racy as it sounds), so Andy’s theme is right up my alley:

The grid’s 16 squares wide to accommodate the theme set, so if the puzzle felt a little slow to you, that would be the extra effort for solving three additional clues.

Fave fill: The Spanish two-fer of LLANO and LLAMA, WILLOW with its salicylic acid clue (we would also have accepted a mention of recent RuPaul’s Drag Race winner, Willow Pill), PLAYFUL puppies, Michael STRAHAN (hated the clue—yes, [N.F.L. Hall-of-Famer Michael] is correct, but I suspect a much larger swath of the American public knows who he is because he’s a charming host of morning shows), THE WIRE (though I’ve never seen it!), and VOTES IN as we watch primary election returns come in. 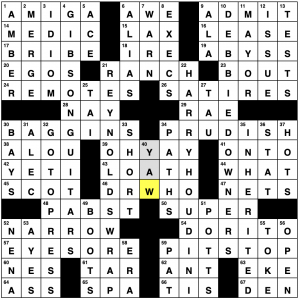 Today’s AVCX was refreshingly breezy, and had a cute theme to boot:

I love a down clue-based theme, and this was executed perfectly.  DEBBIE can precede the first word of each theme answer to make a famous DEBBIE – DEBBIE GIBSON, DEBBIE REYNOLDS, and DEBBIE HARRY. 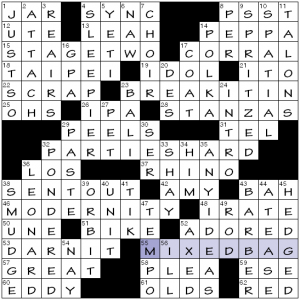 I understand the theme, which itself is a pile-on of two standard crossword theme types, but I don’t see quite how the revealer explains it.

All right, seeing it now I’m able to parse that explanation marginally better, but I still feel it could be worded better. (If I have time (unlikely) I’ll make an attempt to do so.)

Anyway, as I hope you all can see, each of the parenthetical words in the clues can precede the word ‘bag’—swag bag, tote bag, Birkin bag, teabag, diaper bag, et cetera. And if you combine the paired bag-preceding words they can be anagrammed for the answer seen in the grid (e.g., SWAG + TOTE = STAGE TWO).

A fairly involved theme this time out, and I think it works pretty well. 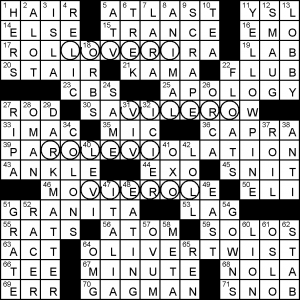 In today’s puzzle by Adrian Johnson, it was abundantly clear the same letters were in each set of circles, but I didn’t stop to ponder why till reaching OLIVERTWIST. TWIST is a classic Cryptic keyword for anagramming, though here the letters span between two parts of longer answers since OLIVER doesn’t have any one-word anagrams.

My error was GRANATA/LEVA. It seemed plausible, as I didn’t know [“Shazam!” actor Zachary], LEVI nor the pudding GRANITA. I thought it may be etymologically related to pomegranates?

These two were something of an outlier for me as the rest of the puzzle played quite simple with most of the clues being quite straightforward and few other difficult or even long entries. Oh, there was [Like everything in a she shed], HERS – not sure what that is? I can guess, though. Oh, and one more: [Evergreen wood used for flooring]; my initial instinct was YELLOWWOOD, which is popular here, but the repeeated wood deterred me, plus I don’t think it’s exported to the US?

Editor: Erik Agard
Theme: Each theme answer starts with R and ends with IGHT, so “right” is on the outside of the phrase. 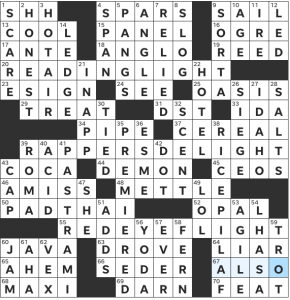 Cute theme, and I liked all of the answers! I was proud of myself that I knew RAPPER’S DELIGHT off the bat without any crosses. On the other hand, I could not see RED EYE FLIGbHT for the longest time – maybe that’s because I normally just call it a “red eye”, no flight? Anyways, I kept thinking the answer would have something to do with a sleeper train or something like that.

Almost all the non-theme long answers in this puzzle were food related, which I love. RICE PILAF, PAD THAI, PASTRAMI, all great. My only real hold up today was that I only know “Oh My God” by Adele, not IDA Maria, and I wanted “comp” over TREAT for 29a [Pay for someone else’s meal]. 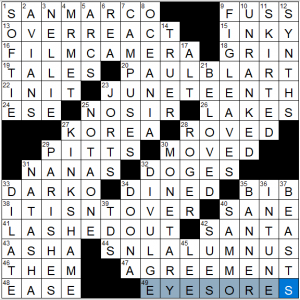 I’ll get this out of the way early: I adore this puzzle. Will is one of a handful (maybe two handfuls) of constructors I consider “can’t miss”, and this grid exceeds my lofty expectations for his work. I’m writing a full day late, but a few highlights:

I never understood the PAUL BLART memes, but they were everywhere, AND there was another mall cop movie that came out around the same time, no? Enjoy the colorful phrase IT ISN’T OVER as well lashed out. Misuse of “alumni” is a pet peeve of mine, so I’m always happy to see it correct, here in SNL ALUMNUS. FIG LEAVES clued to [Fall fashion?] is about as good as it gets.