Note: Fireball is a contest this week. We’ll have review once the submission period closes.

The revealer is SUGGESTION BOXES (38a, [Slotted containers, and a clue to four of this puzzle’s squares]). Said squares are rebussed with synonyms of “suggestion” contained within. 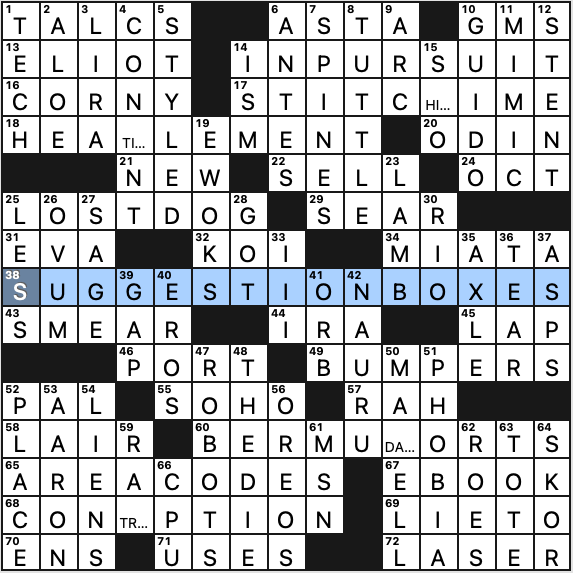 This took me some time to unpack. I got nowhere in the top half of the grid, even after uncovering the revealer. I next came to 68a which I thought wanted CONCEPTION thus making 59d simply RACE (though I knew it had to be RAT RACE). Finally, BERMUDA SHORTS saved me and gave me the aha moment I needed. A fun time and an impressive execution of a rebus theme.

There are plenty of theme constraints everywhere in the grid yet we still get a couple of long entries (AREA CODES and IN PURSUIT) plus LOST DOG and pinball BUMPERS.

Didn’t know the Bluegrass musician Molly TUTTLE though the surname seems familiar to me. Google tells me there aren’t that many famous people with that name nor even fictional characters. Not sure where I know it from. 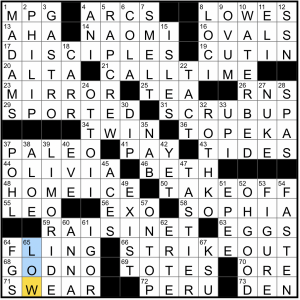 Alex Rosen couldn’t make it any clearer what needs to be done with the theme clues in today’s puzzle:

The second clue of each pair of clues gives you the letters to cut, scrub, take, strike, or otherwise remove from the answer to the first clue to fit it into the grid.  DISCIPLINES becomes DISCIPLES sans “IN”, SUPPORTED turns into SPORTED without “UP”, and HOME OFFICE and FLOUTING become HOME ICE and FLING minus their “OFF” and “OUT”, respectively.

This theme is slightly watered down.

THEME: Add the word “water” before the starred clues (not entries) in order for the entries to make sense. 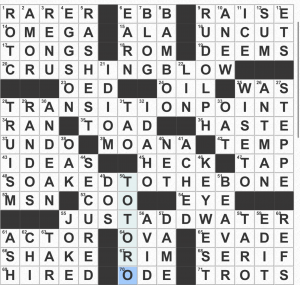 Really enjoyed solving this one, which is high praise considering I’m in Disney World at the moment after a 26-hours-without-sleep day of getting high school seniors on a plane, into a hotel, and into parks in suddenly-oppressive heat.

I admit I didn’t figure out the theme until a solid minute or so after I finished the solve. I was trying to add “water” in some form into the entries… like cramming two H’s and an O in there or something. A nice AHA (or “Oh, duh”) moment for me when I figured that out.

New to me: TOTORO

Nit of the day:

Theme: Each theme answer includes an anagram replacing the place of “ID” in the typical phrase. 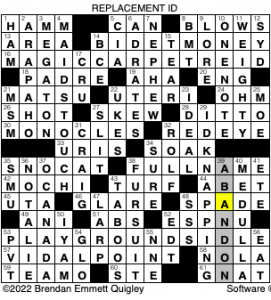 I thought that this was an interesting theme. MAGIC CARPET REID made it pretty clear from the start, and so that was useful as I finished the rest of the puzzle. I think anagrams are fun within puzzles, and so I’m always excited to see them appear, and it was nifty that BEQ kept ID together in each. I also appreciated the Across/Down combo and the fact that so many themers squeezed into this puzzle, especially in IDK NAPPING. That’s exactly what my dog is doing as I right this.

BEQ notes that this was a tight fill because of the theme answers, and you can see that in the stacks of threes on the left and right sides of the grids, but I think it was nice that the corners opened up a bit for words like ONE NOTE, WEIGHTY, ABANDON, NOT A LIE, etc. 37d [“Song sung by Maple Leafs fans”] O CANADA could also be clued in reference to the Sabres, since Buffalo always plays the Canadian national anthem in addition to the American one.

Overall, a fun puzzle with a bunch of great themers.

Editor: Amanda Rafkin
Theme: The second word of each theme answer is a type of soda. 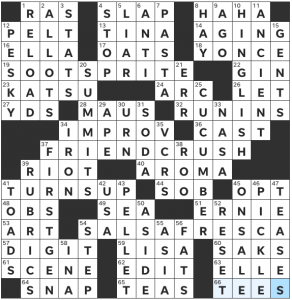 Every time I solve the USA Today, I try to guess what the theme is going to be from the title alone. Today, I was pleasantly surprised that the theme was more interesting than just “the letters POP appearing three times”. Each of these theme answers turns the soda name on its head, and is a lovely answer besides. I’ve never seen “Spirited Away” (I know, I know), but the clue was very helpful in seeing SOOT SPRITE, and I found it to be an intriguing answer. I also love the term FRIEND CRUSH and use it often. 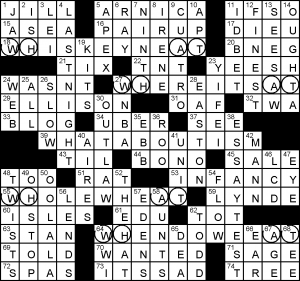 In this puzzle by Adrian Johnson, the grid is one square longer to accommodate WHATABOUTISM, the [Rhetorical strategy of countering an accusation with another accusation, and an apt description of the answers to the starred clues] even-numbered central revealing answer.

Each of four other long across entries are bookended by WHAT, i.e. have WHAT about them: