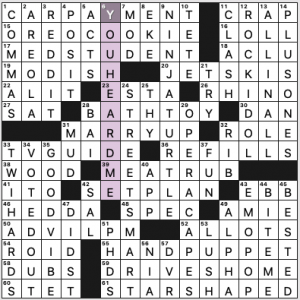 I had high expectations for this puzzle since I’ve very much enjoyed past themelesses from the two constructors. I dunno, though. I feel a little let down by some not-quite-idiomatic fill and one of those classic “glaring clue/answer overlap that Shortz doesn’t care about” examples. OREO COOKIE feels a little awkward to me—you bake chocolate chip cookies, but you just buy Oreos and Chips Ahoy at the store, without adding the word “cookie.” Then you jump to the opposite corner of the grid, and STAR-SHAPED is clued [Like some cookie cutters]. Bah! Then there’s MEAT RUB, which I desperately wanted to be DRY RUB. I just googled meat rub and the hits are almost all for dry rub pages. Which is a relief! Because it sounds a tad porny. And I know many of you tried ROCK STAR for 12d. [Many a Rolling Stone cover subject], because ROCK IDOL sounds weird. SET PLAN also rang false to me. Okay! Now that I’ve got that out of my system—

3.4 stars from me, for the entries that felt jarring to my solving ear. 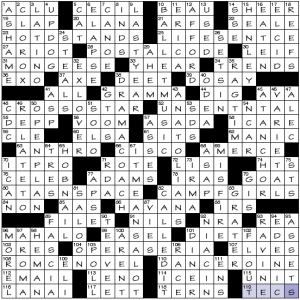 Today’s vocabulary word is filipendulous – suspended by or strung upon a thread.

Each of the theme answers contains a segment that itself is a word that can be appended after ‘hang’, and that segment travels downward from the entry. As is often the case, quicker to show than explain:

A rather intricate theme, which I can attest to by how long it took me to type up the theme answer section above.

Impressive constructing feat, but ultimately I found the solve to be wearying and too humorless. 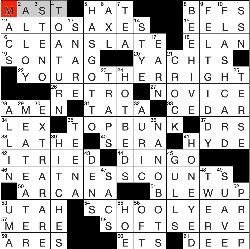 Apologies for terseness again today — just going to call out some highlights from this grid (and also say thank you to Patti Varol if this second week in a row of slightly harder puzzles than the first three Saturdays on which she was the byline editor is an indicator of how things will be going forward). 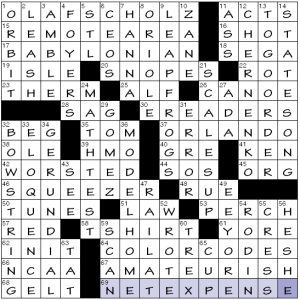 Don’t have much gas left in the tank (charge left in the battery?) for this one, as it’s a busy day ahead of me, so you folks are going to get just the solution grid and maybe a few highlighted entries.

Toughest part of this crossword was figuring out which clues were the simple ones and which ones were devious. I eventually made it through alive, and the southwest region was the last for me to complete. 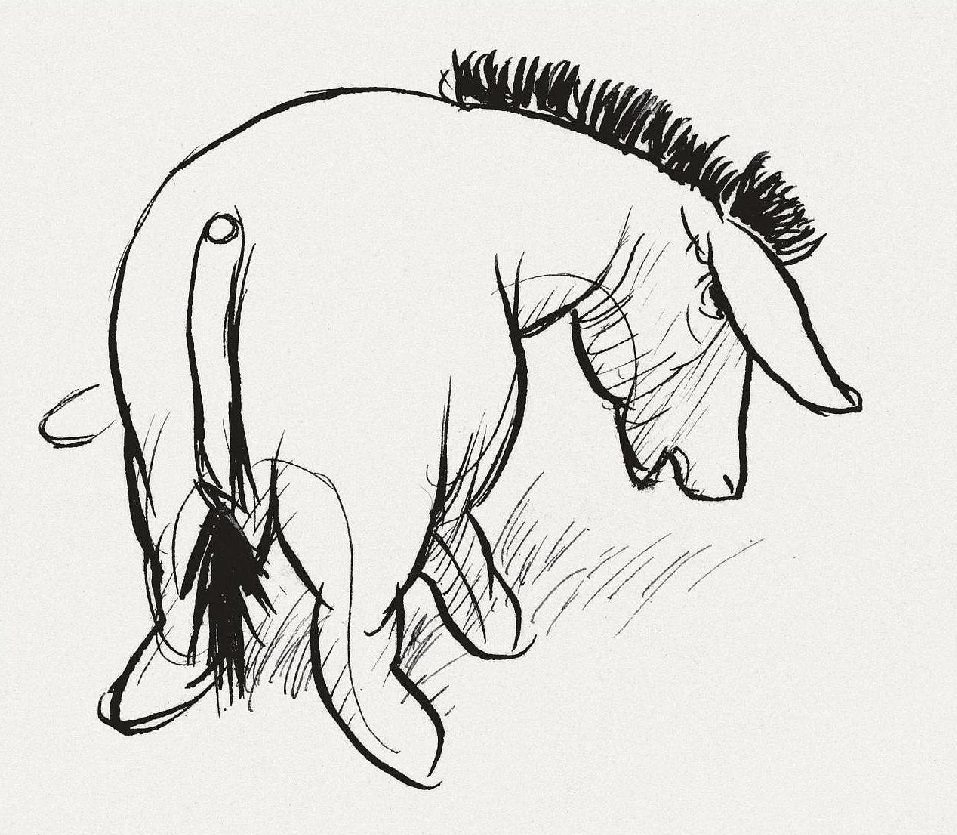 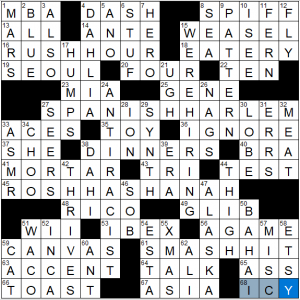 Breezy theme for our weekends today from Matthew — we’ve got -SHH- in each themer. The sequence consistently spans word breaks between the two Hs–understandably so given the lack of HH- as a word start.

Jim P. here sitting in for Jim Q. This is my first time blogging (and therefore solving) the Universal Saturday. Is it always a themeless? Shows you how much I pay attention. 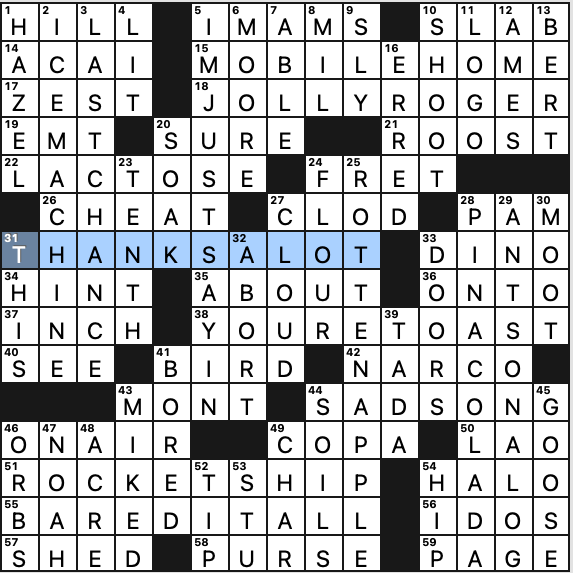 Anyway, this is a wonderfully smooth grid with a ton of fun fill to like. Top offerings include JOLLY ROGER, MOBILE HOME, ICE MACHINE, LAST CHANCE, ROTTEN APPLE, PIÑA COLADA, ANTS ON A LOG, ROCKET SHIP, BARED IT ALL, a sarcastic “THANKS A LOT,” and a menacing “YOU’RE TOAST.” I would include “I’M JUST SAYIN‘” in there as well, but it feels like the abbreviated “Just sayin'” is a lot more common. Just sayin’.

*Just saw that Jim P wrote this one up! Whelp… here’s a bonus take! It’s already written, so why not? Don’t mind your Jim P’s and your Jim Q’s 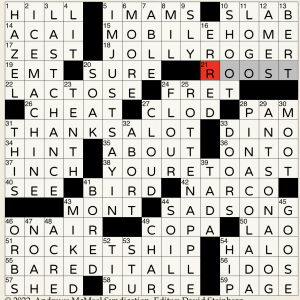 Most of this puzzle was clued very straightforwardly, which is great for a speedsolve. I didn’t glance the time (rarely do anymore), but I feel liked this was my fastest themeless solve perhaps ever. There was almost no resistance. I mean, what else could possibly be a [Hotel fixture that fills buckets] or a [Final opportunity]. Those two, ICE MACHINE and LAST CHANCE, needed no crosses. Even cuter clues like [Residence that’s going, going, gone!] were pretty obvious… though I’m not sure about that clue now that I think about it. What makes it gone? Isn’t that a matter of perspective? Also, why am I overthinking this?

The clue/entry that made me smile the most is 33d [“Are there more wheels or ___ in the world?” (viral question)]. I couldn’t wrap my head around the stupidity of that question the first time I heard it. It feels like the alpha of all stoner questions. I only know it because I teach high school students, and it was a viral question for a day or two. This clue made it just in time for it to feel fresh. Also, the answer is clearly wheels. Change my mind.

Liked [Person in costume?] for STU. Those types of clues are hit or miss in Universal puzzles. This one landed.

Enjoyed the grid a lot! Cluing was as vanilla as I can remember seeing for a themeless though.