I’m getting to this review a bit later in the day, but there’s already some great buzz on Twitter for this Sunday’s NYT puzzle, so I’m excited to dig in. It’s by crossworld icon David Steinberg… and his parents! How cool is that? They’ve presented us a 19×23 grid with some flavor text that says, “When this puzzle is done, read the circled letters line by line from top to bottom to get an appropriate word.” 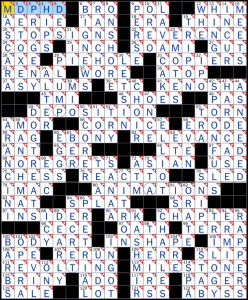 Each down theme entry splits when it hits the related across entry and goes either left or right to finish the entry, resulting in two separate words stemming from the same starting point, and the circled letters (the junction points for each parting of ways, read in order: SEPARATE. Wow – what a theme-dense puzzle! And to be able to find the across theme answers that could be split so that each themed down could continue on to the left or to the right to make viable entries is incredible. And to do all of that without sacrificing the fill quality of the grid is some top-level work.  #constructorgoals

Other random thoughts:
64A: ANT [Social worker?] and 90A: ARK [There was Noah-counting for it] – These were cute clues.
4D: HIPS  [They “don’t lie,” per a Shakira hit] – I swear that when I got to the WHE(REVER) / WHE(NCE) theme entry, I was so hoping it would be a WHE(NEVER) / WHE(REVER) nod to Shakira (but I reckon this will do).
57D: ELLIOT [Actor Page] and 98D: THEIRS [Nonbinary possessive] – I’m always here for LGBTQ+ inclusion!

I hope your Sunday is as cool and unexpected as this puzzle! 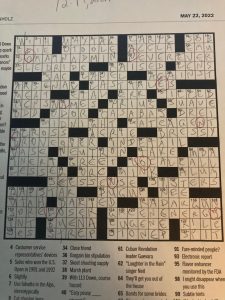 Matt here, filling in for a traveling Jim Q. Was hoping for a meta from Evan to review, and got lucky! I think it’s about a 1-in-6 chance on any given Sunday, and we hit our number today.

The prompt asks us to find a 10-letter phrase, and there are ten starred long across, so we’re probably extracting one letter from each of them:

23-A: [*Type of IT account that has complete access to a network of computers] = DOMAIN ADMIN
25-A: [*Under no circumstances] = NEVER EVER
41-A: [*1957 short story collection by Isak Dinesen] = LAST TALES
53-A: [*Ben and Jerry, e.g., usually] = MEN’S NAMES
66-A: [*Airport employee who scans boarding passes] = GATE AGENT
74-A: [*Motored past, as on a bridge] = DROVE OVER
90-A: [*Phone conversation in your neighborhood] = LOCAL CALL. Nice entry but clue seems off? I think of a “local call” as one where you didn’t need to dial the area code. Proving myself older than Evan here…you really did need to only dial 7 digits for local calls back in the day. And IIRC the local calls were free but the long-distance ones cost money. Also there were only 8 teams in the NFL and you loved it!
97-A: [*Adopts a reasonable course of action] = SEES SENSE. Not a familiar phrase to me but YMMV.
119-A: [*Person who might make accusations of cheating] = SORE LOSER. Great entry.
121-A: [*Power from renewable sources] = GREEN ENERGY. Great entry.

What now? Each entry consists of two words that differ in length by one letter — but wait, there’s more. All the letters of the shorter entry can be found in the longer one, with one letter left over. Those leftover letters, highlighted above, spell out meta answer ONE AND ONLY.

When writing metas for an audience of experienced solvers, Evan can power up and swing for the fences like he did here. For a more general audience that wouldn’t work — the meta linked above took Joon 2 days, so 99% of the WaPo audience wouldn’t stand much of a chance — so Evan must provide a fun but solvable-even-for-newbies meta for Post fans. This puzzle succeeds mightily on these terms; I’ve solved a lot of metas but still appreciated the craftsmanship involved, while a Post reader who’s NEVER EVER (!) seen a meta before would still have a good chance of success. So mixing baseball metaphors, this meta is a strike right over the plate.

9-D: [Boxer who was Arnold’s hero on “Diff’rent Strokes”] = ALI. Kudos for an ALI clue I had never seen before.

Theme Answers: The first letter of each word in the theme answer spells out WFH, referring to “work from home.” 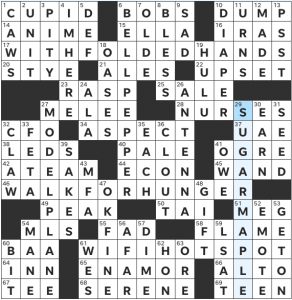 Do you ever wonder how the pandemic has changed different themes? Like would WFH have been a popular enough phrase pre-pandemic? Anyway, I thought that this was a solid theme, pretty much exactly what I expected when I saw the puzzle’s title. WI-FI HOTSPOT feels tricky since it depends on the F in WI-FI, but with its technical hyphenation, it feels like it makes sense. WITH FOLDED HANDS was a great fifteen, and I wasn’t familiar with WALK FOR HUNGER, but it was relatively easy to pick up on the crosses. 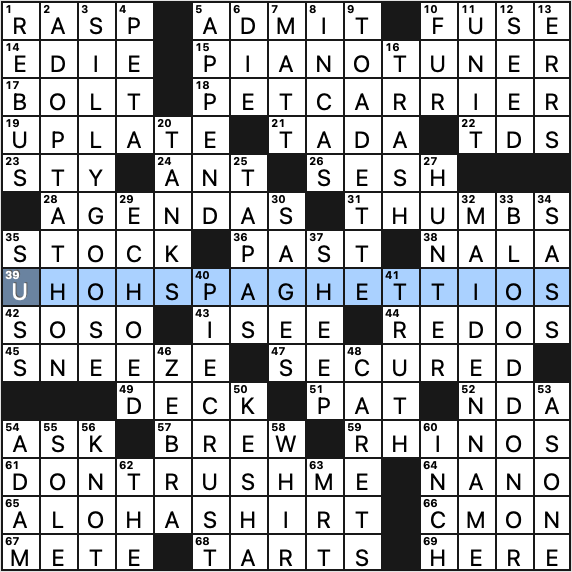 My favorite one—and probably the seed entry for this grid—is centrally located at 39a: UH-OH SPAGHETTIOS. My 13 y.o. asked, “Who says that?” and “Who even eats SpaghettiOs?” I guess I’ve failed as a parent. So we watched the 1979 commercial (titled with “Oh-Oh” for some reason), and she said, “It makes it seem like they don’t like SpaghettiOs.” And you know, she’s right. I never thought about it, but why would you combine your product with the phrase “Uh-oh”? It’s as if the next line in the lyrics would be, “My poor gastro-intestinal tract!”

Also good: ADOPT-A-THON, “SILLY GOOSE!,” Nintendo’s TOADETTE, MAIDEN NAME, BLOOD DONOR, PIE CRUST, PIANO TUNER, PET CARRIER, “DON’T RUSH ME!,” and ALOHA SHIRT. Not so keen on REDOS and AS ONE, but everything else is smooth. 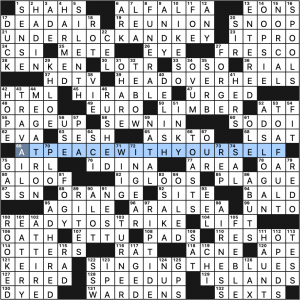 I like the different angle this theme took, but I will be the first to admit that I didn’t bother looking at the cross references during the solve since I was timing myself. If I wasn’t, I probably would’ve enjoyed it more.

What I don’t get is why you wouldn’t title the puzzle “C+”. Seems like an obvious choice to me.

With theme-related entries all over the grid, there are plenty of constraints. But the fill is smooth enough that you don’t notice. And there are definitely highlights like DEAD AIR, ALFALFA, MEGATRON, AD SLOGAN, TO A FAULT, KENKEN, DELISH, RIPTIDE, “LIKE SO,” OOPSIE, and His AIRNESS. 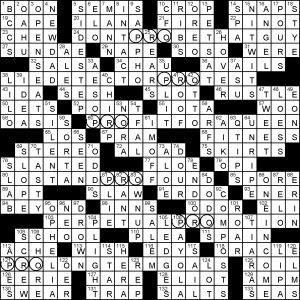 Today’s puzzle by Taylor Johnson has a title, “Welcome to the Big Leagues” that calls back to last Sunday. Here, it’s simply the prefix, pro, inserted in phrases to create wackiness. It’s hard to extend that one gimmick into a Sunday-size puzzle. The results are definitely variable in quality, though many did work well:

A trend for me so far in Patti Varol’s editorship has been mostly easier clues with a few difficult names being the major speedbump. Today’s difficult spots were in the area around [Glazer of “Broad City”], ILANA and [Long who plays Steve on “PEN15”], CHAU and [Leslie of “This Is 40”], MANN; as well as the intersection of [“Chilombo” Grammy nominee Jhené __] AIKO and [Maker of Calling All Goddesses! nail polish], OPI. I misremembered the latter as EPI.

There were a few t’rif clues, though they may have been lost in the ocean that is a Sunday clue list… [Pop up a lot?], NEWDAD and the quirky [T. rex’s “I’m going to eat you!”], ROAR; which I assume is a pop cult T. Rex?