The revealer is “SAY AGAIN?” (66a, [“Huh?”…or a hint to 17-, 23-, 40- and 53-Across]). The clues for the other theme answers are repeated words, and the theme answers themselves are familiar two-word phrases punnily explaining that repetition where the second word is a synonym of the clue word. Got that? 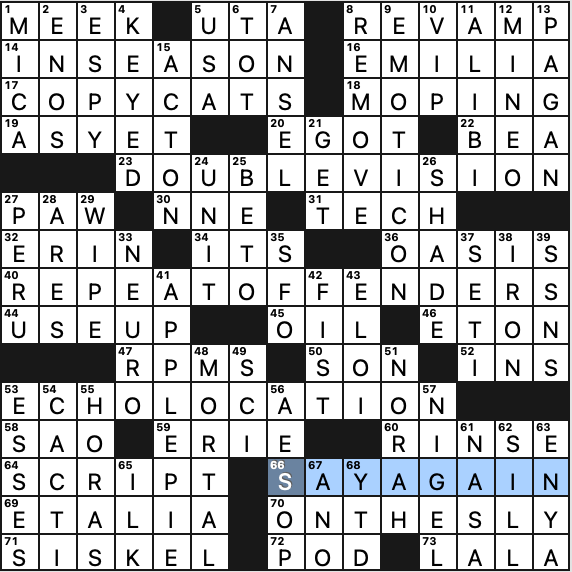 A simple but elegant little theme that I quite enjoyed, especially when I got to the last theme entry which was a little surprising (in a good way). Nicely done.

The clues really reminded me of Timmy and Tommy from the new Animal Crossing game. I can’t remember which is which, but one of them is always echoing the other.

Moving on, we have EMOTICON and APPLE PIE as highlights in the grid plus IN SEASON and ON THE SLY. I also liked REVAMP and Gene SISKEL. 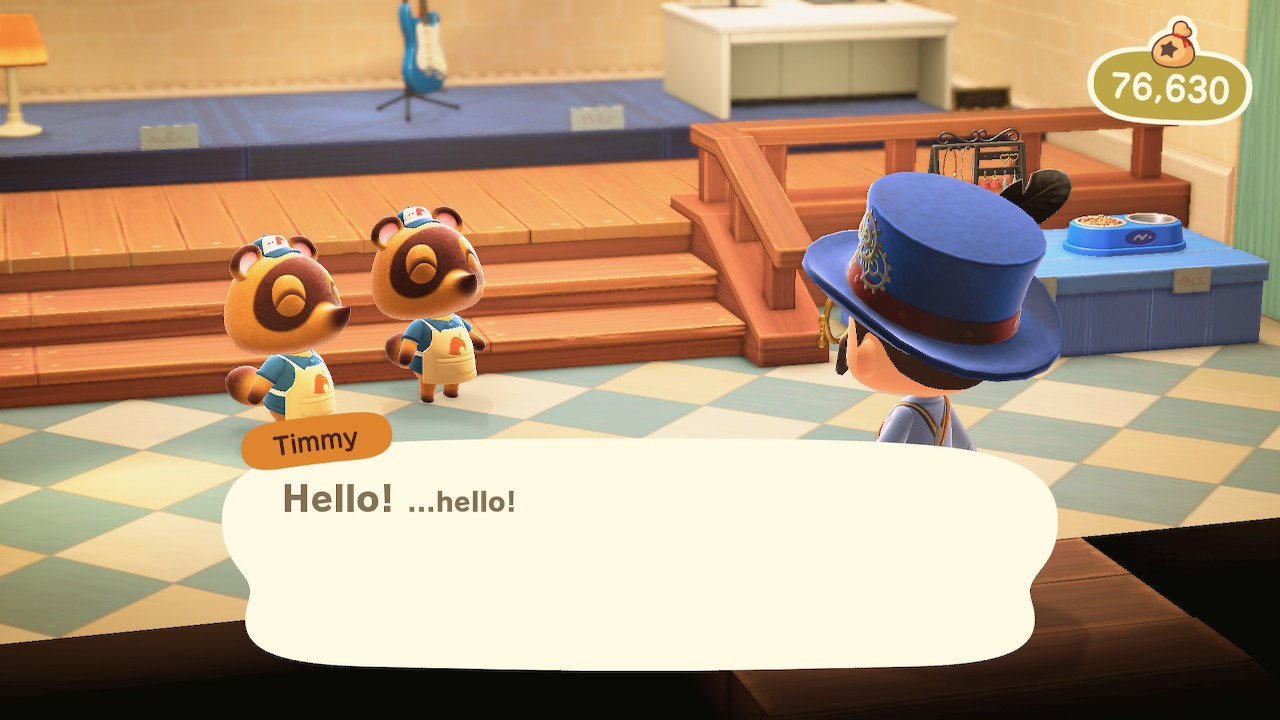 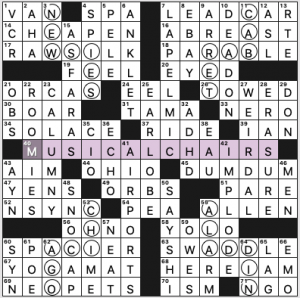 The theme is summed up by 40a. [Kids’ party game … or a hint to this puzzle’s circled letters], MUSICAL CHAIRS. Those zigzags of circled squares take the form of rudimentary chairs (one leg!), and contain the musicals NEWSIES, CABARET, CHICAGO, and ALADDIN. A reasonable enough Tuesday theme.

Fave fill: DUM-DUM, SWADDLE, CALUMNY, LAPEL MIC, WEIRD AL Yankovic (who just canceled some tour dates because he caught COVID despite the “precautions” at his concerts—yo, during a surge of a virus with significant immune evasion of vaccines, gathering in large numbers indoors ain’t gonna be very safe! I’m sorry the CDC still pretends that it’s no big thing now).

Tough for Tuesday: French ARRET, TAMA Janowitz, NEOPETS (depending on the solver’s generation), SYN, CIO, NERO with the clue [Emperor whose mother was Agrippina the Younger]—a Tuesday-level clue cries out for the fiddling/burning angle. 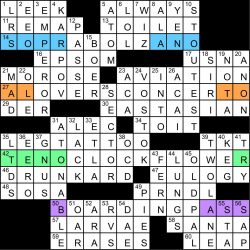 Crossword Nation puzzle solution, Week 573: “Let’s Use Our Outside Voices!”

Hello there, everybody! And just like that, we’re in the last full week of May! Here is hoping you all are doing well.

You don’t need to have a great singing voice to dig this grid, as the four theme entries each have circles at the very beginning and at the very end of them, and, when the circles are combined, create a word that is also a singing voice.

The solving started tougher than expected, as getting the first two letters of LRS made me think I was wrong before remembering that an abbreviation exists for “living room” after seeing it a couple of times online when my brother and I were looking for a new place to live (1D: [Parlors, in rental ads]). A lack of knowledge of an Italian tourist destination could have been exacerbated by a lack of understanding of Dutch names, as that intersecting BOER entry (with Soprabolzano) was a tricky one to untangle for a number of seconds (15D: [Dutch word that means “farmer”]). Speaking of some European flavor, we have Russia sprinkled in with KARPOV (4D: [Chess grandmaster Anatoly]) and VOSTOK (24D: [___ 1 (Yuri Gagarin’s spaceflight)]). Those 3×3 blocks of black squares did not allow too many long non-themed entries to be a part of the grid, but necessary to pull off the throaty theme!

“Sports will make you smarter” moment of the day: WIZ (7D: [Expert, for short]) – The Major League Soccer team currently known as Sporting Kansas City is one of the founding members of MLS, but back at the time the team made its debut in 1996, it was known as the Kansas City Wiz. After one season, the team changed its name from “Wiz” to “Wizards” because of legal action that was taken by the then-popular New York/New Jersey-based electronics store The Wiz. (The “Nobody Beats the Wiz” tagline has been burned in my brain since I was a  wee lad in NYC, and the number of shopping bags that my dad kept after buying records from The Wiz was in the hundreds!) Anyways, the team is currently the only major professional sports team that plays its home games in the state of Kansas, after moving there from Missouri in 2008. Sporting KC has won two MLS (league) Cups, in 2000 and 2013, and four U.S. Open Cups, in 2004, 2012, 2015 and 2017.

Matt went with more of a visual theme this week, placing types of sandwiches in the circled boxes. We have PBJ in the northwest, MELT and SUB in the northeast, HERO and CLUB in the south west, BLT in the southeast, and a ham on rye in the center, with HAM surrounded on the top and bottom by RYE.

This played harder than a usual Jonesin’ for me, especially the northeast corner. I didn’t know MEL TILLIS or SHERE HITE, and never being able to remember how to spell CTHULHU did not help at all. There was also a lot of fill I would not expect from Matt, like SUBRULES, USSA, FOUR HRS, and RESAY. 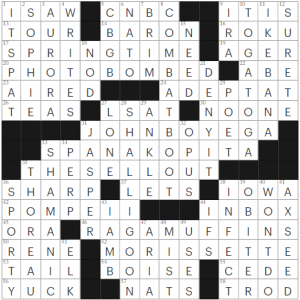 I understand that Natan Last’s crosswords can be polarizing, either with pop obscuriana (if that isn’t oxymoronic) or being aggressively progressive, but I found this outing to be anodyne on those fronts. Can’t say that I’ve done a sufficient number of his puzzles to form my own opinion of his approach.

The grid features a stepped 10-11-10 stack in the center and 10/11 stacks in the northwest and southeast:

For some reason I wanted 31a [Actor who won a Golden Globe for “Small Axe”] to be CHRIS BOYEGA (which of course does not fit) rather than JOHN BOYEGA. Didn’t know 35a [Man Booker Prize-winning novel, which opens, “This may be hard to believe, coming from a black man, but I’ve never stolen anything”] THE SELLOUT. Fortunately, the central entry was fairly easy after a few crossings—33a [Avgolemono accompaniment, perhaps] SPANAKOPITA. 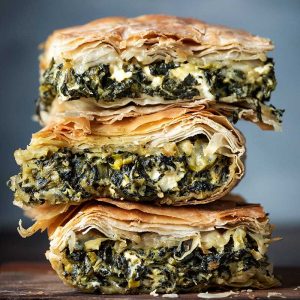 The grid is roughly Z-shaped, further integrated by a symmetrical pair of 10-letter vertical entries. 8d [One of a Marine’s pair, say] COMBAT BOOT; that’s a deliberately vague clue and maybe the hardest in the crossword. 28d ‘Do you want to hear more?”] SHALL I GO ON? Nice colloquial vibe there.

Again, a nice, ‘moderately challenging’ crossword and I can’t imagine it garnering much animus. But we shall see, eh?

THEME: Gods are found at the ends of common phrases. 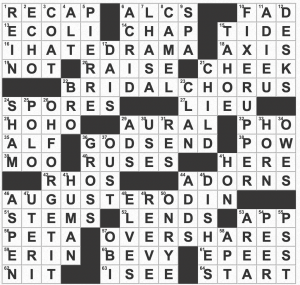 Fun theme with an excellent revealer!

This is one of those puzzles where Universal embarrassingly asks its solvers to count letters, calling attention to the fact that the technology they use is from yesteryear and can’t handle circles like the other major publishers’ applets can. In this case, I don’t think circles are necessary at all- it’s more fun to figure it out yourself. So this would’ve been a good opportunity for Universal to leave letter-counting out altogether.

I do like that the four gods are from four different cultures. I HATE DRAMA strikes me as an odd standalone phrase. Like, sure… it sound like something one would say. I’m sure I’ve said it before. But I just can’t hear it as a phrase that is solidly in-language. It googles ok enough though.

Really screwed myslef up with [“The Thinker” sculptor]. I entered RENE DESCARTES sans the last S to make it fit. derp. I knew it was RODIN, but for some reason I was strangely confident in Descartes’ sculpting skills. Also, I didn’t know RODIN‘s first name.

No NITs really! Thanks for this one!

Excellent puzzle with so much delight—awesome fill and clues, sweet grid, two 15s as bonus fill, and then there’s the theme and themer set! 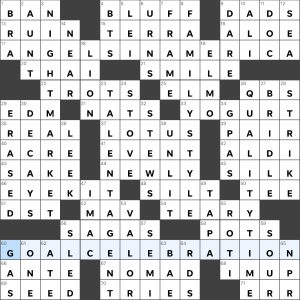 Theme: the second word in each themer phrase forms a new phrase when “free” is added before it, or rather above it as the themers are “falling” in the downs

NIGHTMARKET takes me back to my trip to Singapore and the delicious satay and cold beer on a stifling evening—hard to image that it’s been oh so many years ago already—and with the theme becomes “free market”. FAMILYSTYLE for a meal is great and always reminds me of a picnic or potluck, and become “free style”. TALENTAGENT took me a few moments, as the second half came to me first (since I haven’t heard this term in a while it seems), and become “free agent”. If nothing else, please live the clue for QUALITYTIME to the fullest extent, today and always (nothing is more precious than loved ones), which becomes “free time” (which also should be enjoyed to the fullest as much as possible!). All the themers work so well within the theme and made for a smooth solve with a subtle hint in the title. Nicely done!

I am blown away by the two spanning 15s across that aren’t even themers with such a great grid and flow throughout the entire puzzle. Oh so good and just what I needed today! Hope to see more collabs from this fantastic duo!