If you don’t care for cross references in your puzzle, you’ll probably want to give this one a pass.

The theme answers are words that should be re-parsed as two “words.” The first word is a verb and is a synonym for “change,” and the second “word” consists of letters to anagram to form another actual word in the grid. 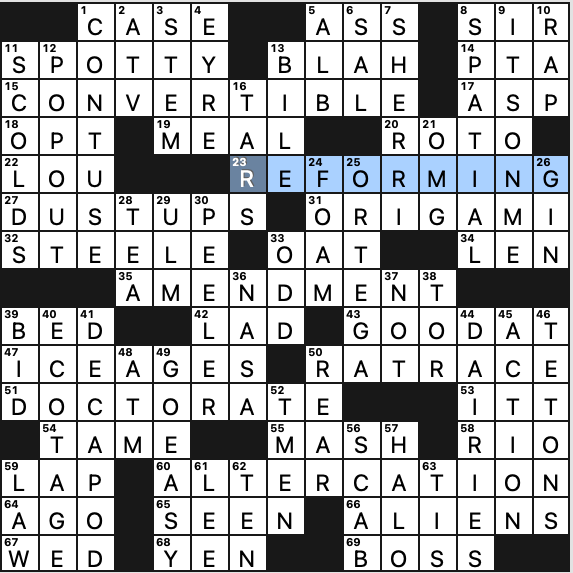 I finished with an error because I went for DEFORMING at 23a. The crossing initial letter came from TADS at 16d with the clue [Gobs]. While TADS is a terrible entry, it made some sense to me because TADS and gobs are both ambiguous amounts (though gobs implies a lot more than tads). Imagine my surprise to find that it was actually REFORMING and TARS. TARS is a synonym for “gobs”? I don’t get it, and I still think TADS—a terrible entry to be sure—makes more sense. Here’s an idea, just clue TARS as a verb that people will understand.

My other nit with the theme is T-MEN. Theme answers should be fun and satisfying. T-MEN is neither fun nor satisfying.

Aside from those two gripes, I actually like the theme and its wordplay, especially the final entry with its six-letter anagram. More of that, please.

Moving to the fill I had the same love/hate reaction. I enjoyed entries like RAT RACE, “IT’S ON ME,” ORIGAMI, DUST-UPS, and GO EASY. But there was way too much clunky crosswordese like ALB, ROTO ([Old newspaper photo section], whatever that is), Einstein’s birthplace ULM, ITT, and TOR. Sigh.

I like the theme concept, but there’s too much detracting from its goodness. Three stars. 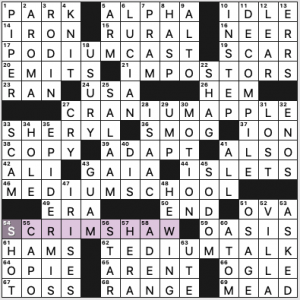 I honestly did not make any sense of the theme till after I’d finished the puzzle! The letter string IUM is added to the end of the first part of familiar phrases or compound words, with the resulting made-up phrase clued accordingly: 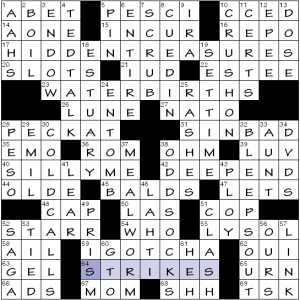 Just as the title promises.

The cluing overall is quite direct and literal; stuff like 62a [Yes, in France] OUI and 56d [Owned by us] OURS. The only one that gave me real pause was 7d [Full-body treatment at a Korean spa] SCRUB. From that I can extend to 13d [Prescription portion] DOSE and 63a [With 48-Across, certain pill] GEL | CAP and thence to 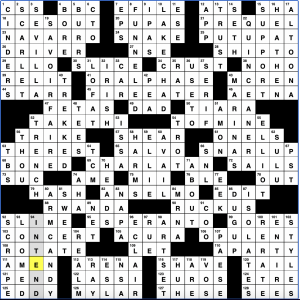 Today’s AVCX from Malaika Handa and Parker Higgins has a lot going on – there’s 5 entries clued with just “-“, suggesting something funny going on with the grid, and a bunch of clues talking about “deep cuts” for different professions. Let’s look at those first:

Each of these is directly below one of the entries clued with a dash, and using the clue before each of those, we have music clues that start in their given squares, but need the deep cuts to bridge the gap over to their entries:

The larger size of this grid also allows for some great contemporary fill like ICES OUT (18A, “Covers in diamonds”).  If you’re not familiar with diamonds being called “ice”, just think of it as another way of expressing how OPULENT dripping in diamonds can be. 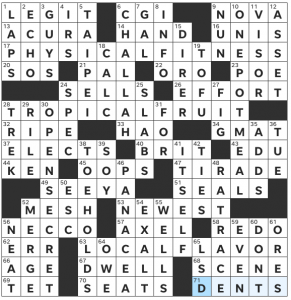 I have to run to an appointment this morning, so some quick overall thoughts on this puzzle: 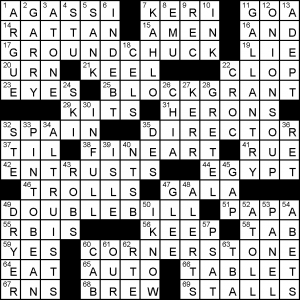 Lynn Lempel’s puzzle today was quite tricky for a Wednesday for me. It’s fairly simple to see what the theme is doing, but describing it is a tad more challenging. Five entries are in the form ADJECTIVE+NOUN but reinterpreted to be VERB+FIRST NAME of a male. So:

With five themers, the grid is pretty quiet, with two of the long downs creating the odd combo of PINTOBEAN/ONIONSOUP. The clues, outside of some names, were quite simple although I did want [Group of jurors] to be PEERS for some reason.