We’re looking for a five letter word this week. There were five long across entries:

75a (PUT), the final horizontal entry served as an additional hint, clued as “___ two and two together (finally figure out something that seems obvious in retrospect).” So we needed to add two and two together. I spotted ONE in the grid (clued as “Common lunch hour)”, and thought that NOON would have been a better answer. I noticed that GOAHEADOF had two two-letter words (GO OF), and I had the rabbit: each theme entry contained two two-letter words that formed other words when put together, each serving as an alternative clue answer: 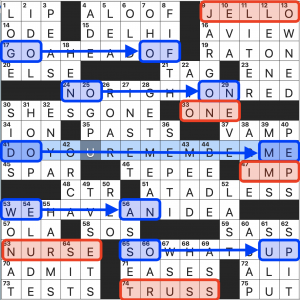