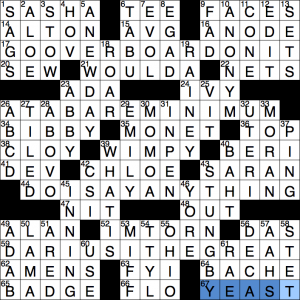 hello and welcome to episode #729 of matt gaffney’s weekly crossword contest, “Count to J”. for this week 3 puzzle, we were told that the contest answer was a five-letter word that appears in one of this puzzle’s clues. okay. what are the theme answers? very probably the four long across answers:

so, what’s the theme? well, i don’t know, but it’s interesting that all of these answers have some quite short (1- and 2-letter) words. i don’t know how that relates to the title, which is a version of “count to 10” with an alphanumeric substitution (A=1, B=2, etc. up to J=10). i’m a little uncertain about these being the only four themers, too, since we are looking for a 5-letter word, but perhaps the mechanism isn’t quite 1-to-1.

i do think there is some weird fill, like the hideous abbreviation {Subj. for Darwin} EVOL in a spot that could have easily been IDOL or AWOL with some minor tweaks. so that suggests that maybe there is extra theme here somewhere. there’s another awkward V abbreviation {A, C, or K, e.g. (abbr.)} VIT, so maybe the V’s are relevant somehow. combined with the I’s in DO I SAY ANYTHING and DARIUS I THE GREAT, maybe we’re supposed to be looking at roman numerals, but i don’t see what that has to do with J.

getting back to the A=1 idea, maybe we’re just supposed to count letters in the grid (up to J, i guess). there are 26 A’s, which is something. we can keep counting to get 8, 4, 9, 18, 3, 5, 5, 14, and 0 for BCDEFGHIJ. i don’t know what to do other than perhaps convert these back into letters: ZHDIRCEEN. hmm. that’s not hugely relevant-looking although it almost kinda sorta suggests THIRTEEN. but they’re all fairly typical letter counts for a crossword—nothing out of the ordinary in the distribution.

well, i dunno. i’m going to send in a wild guess 5-letter word from the clues, but i don’t have any idea what’s actually going on. somebody enlighten me in the comments, okay?