August Lee-Kovach just turned 15 I believe, but he already has three NYT puzzles under his belt. The other name in the byline is new and is undoubtedly some relation in August’s crossword-solving family. Both are making their WSJ debut here. Congrats!

SKI SLOPES is the revealer at 66a [Spots for moguls, and what happens in each set of circles]. I’m not seeing how SKI actually SLOPES in the circled letters, but those circled letters comprise words that can precede “ski” or “skiing.” 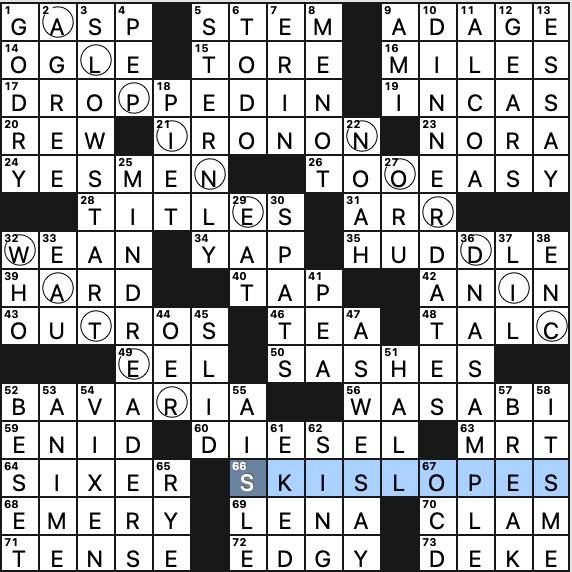 Those circled-letter words are ALPINE, NORDIC, and WATER. To me it sounds better if we use the word “skiing” because I don’t think I’ve ever heard anyone say “Alpine ski” or “Nordic ski”.

I can’t say I got a lot out of the theme. It feels rather light, to be honest.

But the rest of the grid has plenty of enjoyable fill, almost on the level of a good themeless puzzle. Highlights include SLOW START, DINNER DATES, DNA SAMPLE, MIND READERS, “TOO EASY!,” BAVARIA, DROPPED IN, and WASABI. With the triple-checked circled letters of the theme constraining the grid, that’s quite a lot of long, fun entries.

I’ll accept AS WE SAY, but it feels like the less common cousin of “as they say” or “so they say.” I didn’t remember PIET Mondrian, and—oh yeah—I finished the puzzle with an error (for the second day in a row) at the crossing of ORU [Tulsa sch.] and ARR [Dep.’s counterpart]. The former seemed like it should be OSU for Oklahoma State Univ (it’s not, that’s in Stillwater), and the latter, well, “Dep.” could be a lot of things—dependent, depot, deposit, deputy. So I figured ASR was just something I didn’t know.  I didn’t think of departure even after I filled it in correctly. Not a fair crossing if you ask me, but it could be made fairer with less ambiguous cluing. 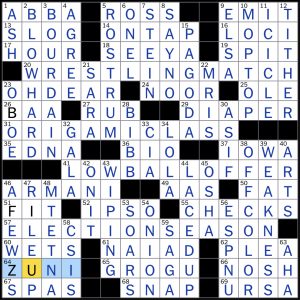 I’d gamble it didn’t take long to figure out what today’s NYT was referencing in its clues:

and remember: you never count your money when you’re sittin’ at the table, there’ll be time enough for countin’ when the dealin’s done.

Could you imagine an ABBA (1A, “”The Winner Takes It All” group”) cover of this?  Oddly enough, I can.

Theme: The W sound in each phrase has been replaced with an SQ. Thanks to marciem in the comments for pointing this out to me! 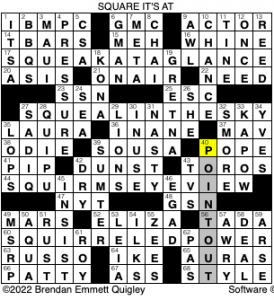 Since it took me over a day to get this theme, I think it was a bit difficult, but it’s definitely still BEQ’s signature clever wordplay.

Also, there were some fun puzzle-oriented clues, including 7d [“Puzzle within a puzzle”] META and 55d [“Puzzle’s central components”] ZEES, which I think are always cute and fun to see.

Grid-wise, this symmetric grid had such a fun columns that had a nice 8-letter set stacked with 6-letter answer starting at 4d with PRESSURE over 45d INSIST and 10d [“So you’re saying there’s a ___”] CHANCE and 40d POINT OUT. Overall, it stayed really smooth, despite two 15-letter themers and two 14-letters, which was pretty incredible.

Editor: Amanda Rafkin
Theme: The final word of each vertical theme answer can precede WIRE in a phrase. 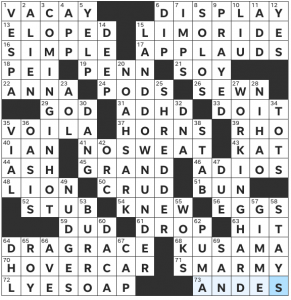 Well, the only bad thing I can say about this puzzle is that I now have “we come from a LAND DOWN UNDER” by Men at Work (WORKING HARD?) stuck in my head. I love all of the theme answers, and the resulting “wire” phrases are nice too. And like any good USA Today puzzle, the title adds a whole other layer by pointing out how the theme entries literally go “down” to the wire. Top notch work all around.

It’s a testament to how strong this puzzle’s fill is that at first I didn’t even realize the theme answers were vertical – I was distracted by LIMO RIDES, NO SWEAT, HOVER CAR, DRAG RACE. Once I realized where the theme answers were, I was amazed by the center stack of NOAH’S ARK, LAND DOWN UNDER, and SHREDDER (a gimme answer for me as a late 90’s kid). If I do have one complaint about the puzzle, it might be that there are a fair amount of blocks of 3 letter answers all stacked together, but even those have interesting clues like [Comedian Lara] for IAN and [Museum of Islamic Art architect I.M.] for PEI. It’s great when common answers can still teach you new things.

THEME: The word HAND can come either before or after each of the words in a common two-word phrase. 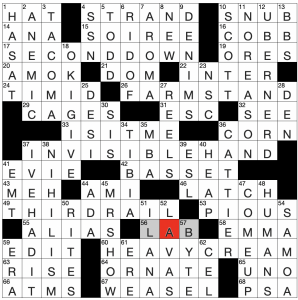 The word-that-can-precede/come-after theme is certainly nothing new, yet it somehow manages to feel fresh here. I like that “hand” is “invisible” in the sense that it feels hidden right in the middle of the phrase, where it consistently comes after the first word and precedes the second. Also, all of the phrases are familiar in this puzzle- nothing feels shoehorned (which is often the case with these types of themes). Bravo!

Fave fill was UBER-NERD next to NO REASON. The fill suffers a bit with the amount of theme perhaps. IS IT ME? close to the “AM I…” almost has a dupe feel. LAVAS is an odd plural. And some other stuff felt a bit bland, but the theme was clever enough to redeem anything negative in there. Last nit is having SECOND as one part of a themer and THIRD as another.

Fun one! Is this a debut for Laura Dershewitz? I have no record of seeing that constructor’s name in a past puzzle. If so, congrats!

Every time I solve one of Paolo’s puzzles, I think “man, I vibe with Paolo so much.” I liked this puzzle for the same reason I like all of his puzzles: they’re fresh, lively, playful, and feel like they were written for me, specifically. If you do not vibe with Paolo, I hope there are other constructors you vibe with. This layout featured what I’m calling quad-stacks in the NW and SE (three 8s atop a 10) plus stealth 15s running down either side. 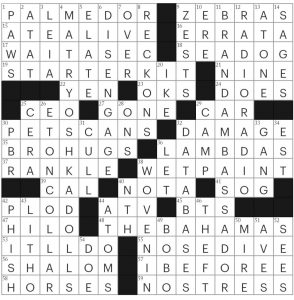 Fun clues were [Animals at the ends of alphabet books, often] for ZEBRAS, [Sign next to a new coat] for WET PAINT, [Part of a spelling rule defied by science?] for I BEFORE E, [“Now it’s your turn to talk to me on the walkie-talkie”] for OVER.

Also, I wanted to call out some of the clues where Paolo / The New Yorker editors made this puzzle easier. Easy themeless puzzles are new for me– I don’t think I really solved any before the past year. The New Yorker does a good job of smoothly integrating extra bits of information into the overall term in clues like these: 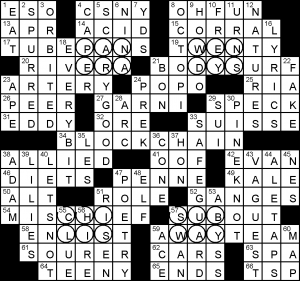 Today’s puzzle by Blake Slonecker certainly felt very busy. To fit the central ten-letter revealer, BLOCKCHAIN, and possibly also to help the grid breathe a bit more, the puzzle is 16×15. Each of four 3×2 blocks spell six letter US take-away chains: PANERA, WENDYS, CHILIS and SUBWAY. CHILIS is the least familiar of those, but have at least heard of all them despite only one, SUBWAY, being in South Africa, if only barely.

With the big chunks of helper squares in the top-right and bottom-left, this grid has a whopping 44 black squares. The design was also walled off into discrete sections, which often makes thing easier, but today proved to make me get mired frequently. I clung to SupercOOl for SCARYGOOD at 5D for way too long. I also finished with HOWDy at 9d and though POPy made little sense, I couldn’t see any other words… 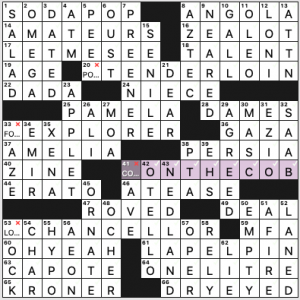 Terrific theme! Each long themer starts with a rebused 4-letter word, and in the Down crossing, that word is parsed as “X or Y” and either of the two letters works for the crossing clue.

This is a 5-star theme. Overall vibe for rest of the puzzle less thrilling. Let’s call it 4.5 stars for the themed and non-themed entirety.