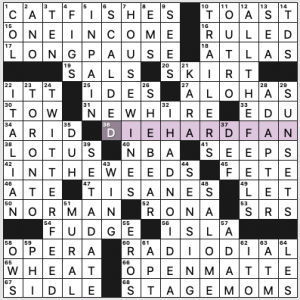 So much fun and fresh stuff in this grid! Fave fill: CATFISHES, LONG PAUSE, DIE-HARD FAN, IN THE WEEDS, STAGE MOMS, TWITTER FEED, HOUSE WINES, “I HAD NO IDEA!,” and ALL THE FEELS. If you’re looking askance at ALL THE FEELS, read what the Merriam-Webster folks wrote about phrases with the feels in them. 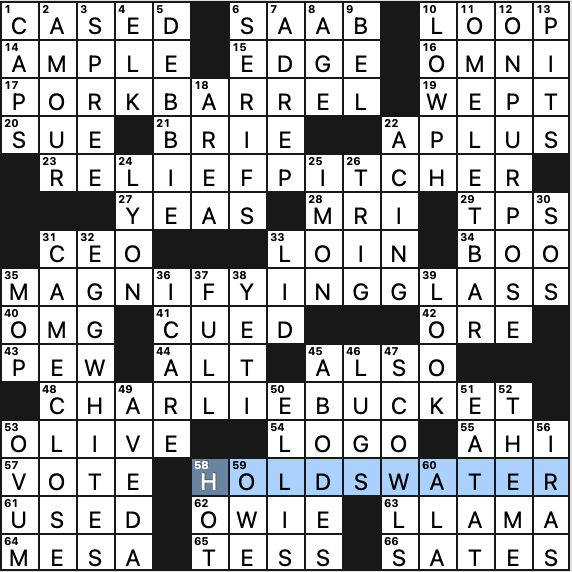 Nice. I didn’t guess the THEME (52d) before uncovering the revealer, so it provided a pleasant aha moment.

Any puzzle with CHARLIE BUCKET in it is a winner in my book. I’ve seen the original movie many times since I was a kid, and that moment—when all hope is lost and Charlie is at his lowest, when suddenly and unexpectedly he finds there’s a chance for him and the tension builds—well, I’d be lying if I said I didn’t still well up and have a thrill in my heart as that hint of gold is revealed and that piccolo sounds. You go, Charlie!

Elsewhere we have an OMELET BAR with EGG WHITES as its symmetrical counterpart, plus ON PURPOSE and CAME CLOSE. Nothing much to scowl at, though LOW PH looks odd in the grid.

Clue of note: 20a. [Basketball legend Bird]. SUE. Shame on me for only thinking of Larry. 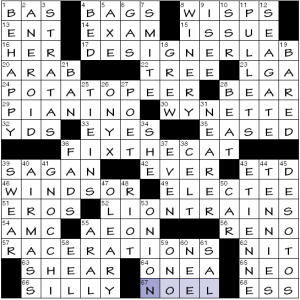 Theme’s okay, but not too exciting. And it has that major ding.

One final question: doesn’t the cusp of summer seem like an odd time to run this a crossword with this theme? 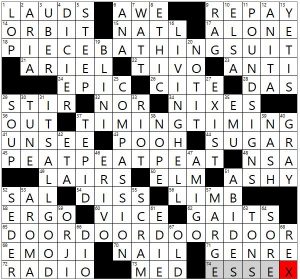 This week’s themed New Yorker was a bit tougher than the last few for me. Oh wait, it’s slightly oversized, at 16 wide. Now I’m not sure.

Anyway, our theme plays on phrases with numbers in them:

If we haven’t seen this exact mechanism before, we’ve seen something like it, but it’s still a good time. I was thrown off throughout the whole puzzle by the difference between the first themer, which has different words, and the rest of the set, which have the same word repeated. The end result was I pretty much filled in each of the second, third, and fourth themers at the same time before cleaning up the remainder. I wonder if there’s a set out there that works for two-, three-, four-, and five-.

Theme: Each of the five women featured in this puzzle will appear on a quarter in 2022. 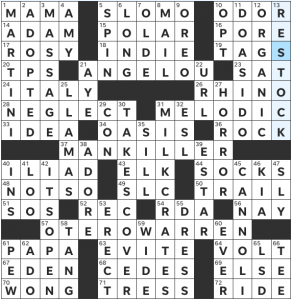 I love this theme and theme set. It’s awesome to learn from Sally’s Blog (and Wendy’s commentary there) that these women will be on quarters beginning this year. Some of these women I could have gotten without as much information as was given in this puzzle, but others, like Wilma MANKILLER and Nina OTERO-WARREN, I definitely did not know as much about. As always, I love the educational aspect of this puzzle, and I think that this puzzle really exemplifies this.

Grid-wise, I loved the top open corners and the fact that it’s a horizontally symmetric puzzle, which is super fun and often allows for this much smoother upper half. It also allowed for both 31d [“Dairy aisle storage bins”] MILK CRATES and 30d [“Gets out of the rain”] TAKES COVER, which are two great tens. It’s also interesting to see the ways in which the women in this puzzle are highlighted and where. Anna May WONG and Sally RIDE anchor the bottom of the grid whereas Maya ANGELOU, Wilma MANKILLER, and Nina OTERO-WARREN fill through the center, making the theme really salient throughout the fill.

That’s all from me!