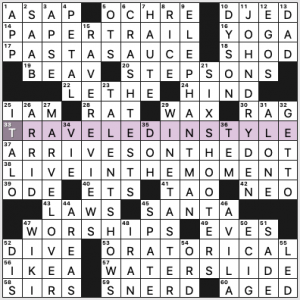 This 68-worder is anchored by a triple-stack of 15s in the middle, crossed by eight long Downs. Highlights in the fill include a PAPER TRAIL, TRAVELED IN STYLE, LIVE IN THE MOMENT, WATER SLIDE, MARVEL OVER, RAVE REVIEWS, CRASH TESTS, TALENT SHOWS, and JOHN DRYDEN.

Favorite clue: 17a. [It’s often found on bow ties], PASTA SAUCE. At first I was thinking how strange this was. First off, bow ties are mostly gendered to the male side, and I’ve never worn one. Second, wouldn’t a long necktie or a shirt get far more food spilled on it than a bow tie? … Then I remembered farfalle, or bow tie pasta. Oops.

Four stars from me. Didn’t love everything in the grid, but hey, there were some tricky clues and lots of juicy long answers to distract from that. 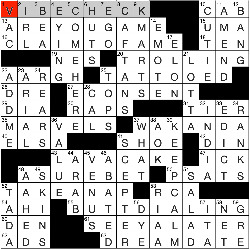 Lots of fun stuff in today’s themeless, including some lovely clues of the question-mark variety. Makes me feel like I’ll have to up my game the next time I submit one to LAT!

I wasn’t so crazy about A SURE BET at 48A — the A makes an eight-letter entry feel very forced. I also have seen some variation of [Leaves for lunch] as a clue for SALAD enough times now that I’d like to see that angle retired, at least for harder puzzles. But overall, an enjoyable solve! 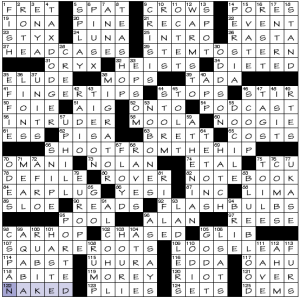 Today on the menu: wordplay hijinks with culinary vegetable anatomy.

A lot of these were rather amusing, and the cluing was spot-on, so kudos! 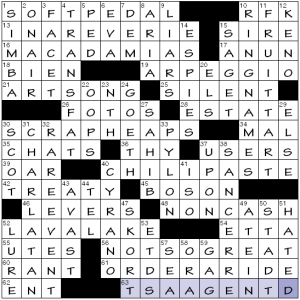 Unlike many Stumpers, there was no point at which this crossword felt impenetrable. I had some inroads early and consistently was able to seep my cruciverbal tentacles across (and down) the grid.

Even so, it did take significantly longer to solve than a typical 15×15 puzzle, which in my book qualifies it for Stumperdom.

Anyway, a gentler but still satisfying Stumper workout this morning. 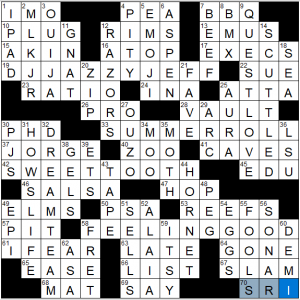 The theme is pretty clear from the title. Each themer has three pairs of doubled letters:

Brooke often uses basketball terms and angles in her grids, and while Triple-Double evokes the game, I notice a number of entries that aren’t clued from that direction – RIMS, DREAM TEAM, HORNETS, SLAM, LSU.

Founded in 1837, Philadelphia’s Cheyney University (45a) is the country’s oldest HBCU. Journalists Ed Bradley and Jim Vance are notable alumni.

Tunisian designer Azzedine ALAIA is not someone I’ve learned from Stella Zawistowski’s puzzles, but skimming his Wikipedia, I’m sure I’ve seen his work. 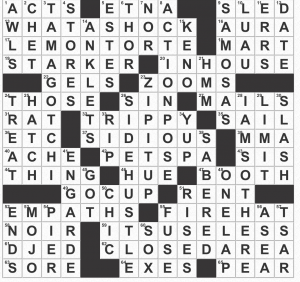 This one was odd for me. Nearly all of the longer entries didn’t strike me as in-language phrases or there was something that felt off. Perhaps some regionalism? I’m not sure, but here are some entries that didn’t sit right with my ear: WHAT A SHOCK! (“I’M SHOCKED!” is what I hear), I AM SO THERE (I’M SO THERE is what I hear), ACTION POSE (new to me), ZIP IT UP (ZIP IT! Is what I hear),  GO CUP (new to me… I know “TO GO CUPS”), SABERED (huh?), and both LEMON TORTE and CLOSED AREA felt green-paintish. TAMAGOTCHI has some dust one it, but I will say it was fun to try to figure out which vowels went where.

I would’ve loved SIDE HUSTLE but it was mangled with a cringy navel gazer of a clue [Selling crosswords for publication, maybe]. I wish they would stop those meta clues. Universal does those often. However,[Crossword construction, for one] being the clue for ART is still the granddaddy of all cringe meta clues I’ve seen. I don’t know why they feel a need to wink at the hardcore crossword community.

Anyway, not a lot of positive stuff I’m saying, I realize. This one just wasn’t for me.