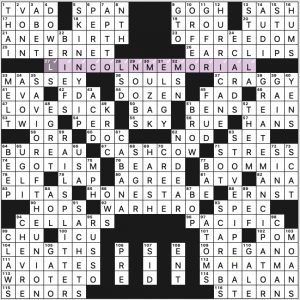 Amy here, stepping in for Nate, who, like any Californian worth their salt, is off making a movie.

I wouldn’t have thought of celebrating the centennial of a national monument being built, but here we are. The grid art dedicated to the LINCOLN MEMORIAL include’s HONEST ABE‘s STOVEPIPE HAT and the Memorial itself. The black squares in the middle sort of look like the SAVIOR OF THE UNION (haven’t heard that epithet before) is sitting on top of his monument with his arms and legs flung high in glee. Lincoln’s BEARD, GREAT EMANCIPATOR and RAIL SPLITTER nicknames, and [what this puzzle’s subject promised in his most famous address], A NEW BIRTH / OF FREEDOM. (He didn’t know that the backlash to Reconstruction would trash that new freedom for Black Americans for decades to follow.) Oh! And the three stranded 3-letter entries between the Memorial’s columns are PRE, SID, and ENT, so that spells PRESIDENT. If you had no idea what letters you needed for 107d. [___ the Kid, rhyming N.H.L. nickname], well, no other letter starts a common (nick)name with the *ID pattern, and if you thought it might be SYD, well, it ain’t PRE/SYD/ENT.

Fave fill: SKINNY-DIP! Lincoln was skinny. You think he ever went skinny-dipping?

I enjoyed learning that hat trivia, but “a bunch of phrases relating to something historical” doesn’t make for the most amusing crossword. A 21×21 puzzle with no humor inherent to the theme is a lot of squares to solve without wordplay. 3.75 stars from me.

No revealer in today’s puzzle, but a hint comes in the clue to the first theme answer. Combining the hint with the title of the puzzle, we learn that the starred clues’ answers contain a word that is a type of haircut and that word sits atop another entry which contains the letters –REST–. 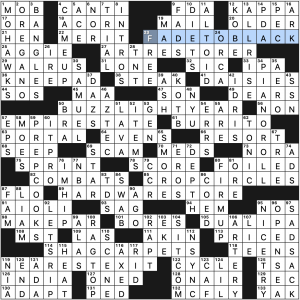 I can’t say I paid much attention to the theme during the solve, and I don’t know that it would’ve helped me a whole lot. After all, I don’t know what a crop haircut is. But the entries themselves are fun and I’m impressed at the execution here with such long entries stacked atop one another.

In the fill I’m liking PIANO ROLL, PREP COOKS, MOHAWKS (clued appropriately as the people, not the hairstyle), “NICE TRY,” SAD SACK, KNEEPAD, and LETS RIP. Not really sure that “CAN’T I?” is something people actually say, but other than that, smooth fill all around.

In fact the fill is so smooth that I racked up a solve time that I’m still not sure I believe. I’ve never solved a 21x so quickly before.

Theme: Each theme answer breaks up GIFT so that the answer starts with G and ends with IFT, literally “parting gift.” 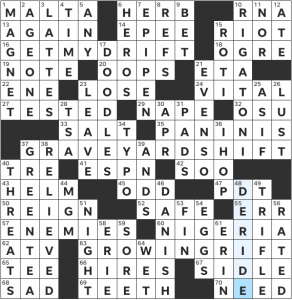 This theme was really fun. While I don’t watch Insecure, it was easy enough to start on the crosses with GROWING RIFT and then to fill it in completely as it became apparent. I also thought that GET MY DRIFT was a fun one. I don’t hear people say it super often, but it was still pretty clear and set a nice precedent for the themers to follow.

This grid is asymmetric, and I think that the SW corner ends up feeling a little segmented off from the rest of the puzzle, with its only real opening coming through the themers. The same could also be said for the NE corner, with openings only through 29a [“Body part beneath a necklace clasp”] NAPE, GRAVEYARD SHIFT, and 55a [“Make a blunder”] ERR. However, the middle feels very connected, and it’s easy to flow downward through the grid.

A few things I noticed:

Overall, such a fun Sunday puzzle!

This puzzle really gets down to business. And across.

THEME: Well known businesses/corporations meet, and their central crossings spell out a word. 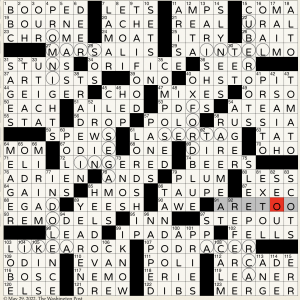 We’ve all had those moments when a word you think or accidentally enter coincidentally appears in the grid later in the solve. But I had one of those moments that was mind blowing just now. When FORD and SERTA met, I thought to myself “They would make an excellent SLEEPER CAR!” Then I uncovered SLEEPER CAR, and I had to pause and wonder if I hit upon another layer of theme. Nope. Just a very wild c0incidence. Anyone else have one of those moments worth noting?

Anyway, this is a breezy over-the-plate puzzle today. The elevator is back on the ground floor and this is accessible to all. This is one of those puzzles that doesn’t seem so complicated but there are a lot of theme answers that need to cross at specific areas, so much more complex than what meets the eye. Some really nice finds to boot! Nothing seems forced (OXFORD BLUE is new to me, but that’s it) and the businesses are all very well known crossword regulars. I did enjoy that MARSALIS made an appearance. That’s personal though: My pup is named after the patriarch of the family, Ellis MARSALIS, who died of Covid complications on the same day my pup was born,.

EGAD clue for the win. [Exclamation that Robin theoretically could have used instead of phrases such as “Holy oleo!” or “Holy bargain basements, Batman!” (he actually said those)] That’s great. Especially because the answer is so short and common. Also, how in hell did they not break character when they said those stupid phrases on set?

Not too much else to say about this one. I liked it! And of course, we are very pampered with the Birnholzian added layer. This one, MERGER, was elegant and apt. 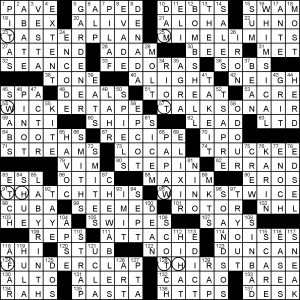 I am going to assume this puzzle theme by David Alfred Bywaters is based on an American abbreviation convention I have never seen. MTW and F stand in for four of the five weekdays, and Th is the odd one out with a two letter abbreviation. Another oddity of the puzzle theme, is the use of four theme pairs: Monday and Tuesday swap to make wacky phases, then Tuesday and Wednesday, Wednesday and Thursday, and finally Thursday and Friday. The weekend disappears and Monday and Friday only appear once.

While the theme was a bit more tricky than many Sunday LAT’s, being based on wacky phrases, the rest of the grid was fairly straightforward. [Term with a check mark on an airport sign] TSEPRE was pretty opaque to this non-American. On the other hand, [Pills for pets, often], CHEWABLES was firmly in my bailiwick… Not all chewables are very appetizing; Rimadyl, however, is  dangerously delicious though, and has resulted a good unintentional pet OD’s in its time…

Before I solved this puzzle, I noticed a typo in my WaPo write-up (I’m typo prone). And I changed “to” to “too.” How timely.

THEME: Phrases with different to’s in them (I don’t know how one spells that word when referring to them collectively). 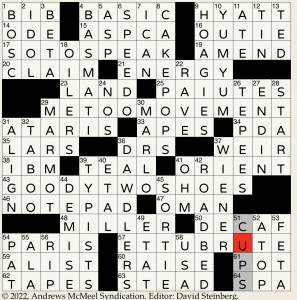 I’m not entirely sure I have the theme right. It seems paper thin. Is there an element I’m missing? What does the title mean? Oh… ok… like 2 is “double” and there are four different iterations so they’re mixed? But the only one that means “double” is the 2 version… I’m so confused. Gonna stop thinking about it. Why these phrases though out of the plethora that one could find? Ok. Gonna stop thinking about it now.

In the fill, PAIUTES is very new to me. I needed every cross and triple checked to make sure it was right. That’s a pretty long entry for a word that might not be familiar to some. Does anyone say “YUM! YUM!” I know it as the excellent sauce at hibachi. MARLO Thomas was new to me.

Liked the clue for HOAGIES!

All in all, Universal and I didn’t click this weekend. Oh well. Next weekend ain’t so far away!