Note: No WSJ puzzle today due to the Memorial Day holiday.

Theme: Each theme answer’s first syllable is a different spelling of NEW 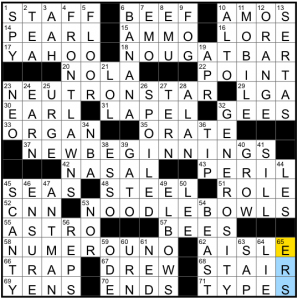 Cute, simple theme today. Are there other NEW spellings that weren’t in the puzzle? I can’t think of any off the top of my head…. I think what makes this puzzle stand out is the high quality of the theme answers themselves. NOODLE BOWLS is my favorite, and I like how NOUGAT BAR and NEUTRON STAR rhyme. It’s also elegant that none of the answers actually use the word “new” since it’s in the revealer. I don’t think of nougat as being particularly nutty?? But it was easy enough to puzzle out from the “candy” part of the clue.

I felt like I was moving very slowly on today’s puzzle but I still ended up with an average time, so I’m curious how other people’s times were. GENEROSITY and FRONT LAWNS are both nice but neither one blew me away, and then I misread the clue for the former from [Grassy areas near driveways] to “Grassy areas near freeways” and I kept trying to make medians or something work. I also struggled with [This is not good!] for SPOILED, which felt like a tricky clue for a Monday? But I enjoyed it nevertheless.

Hope everyone in the US is having a happy holiday weekend! 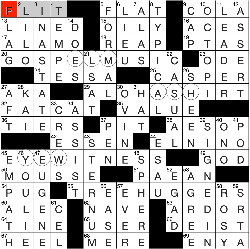 Cute and green theme from Catherine Cetta today. The revealer at 55A [Nature lovers, and what the answers to the starred clues literally are] gives us TREE HUGGERS, and if you take a look at the circled squares in each theme entry, you’ll see that they each spell out a type of tree. In two of the three cases, the tree names include letters from each of both words in a two-word theme answer; in the third, the theme entry is a single word and the tree name appears wholly within that word (but across the break of a compound word, which is better for theme consistency than if it were contained in a non-compound word).

Nothing to trip you up in the grid, so I didn’t notice the FLIT/FLAT juxtaposition at 1A and 5A until after the fact. Fun! 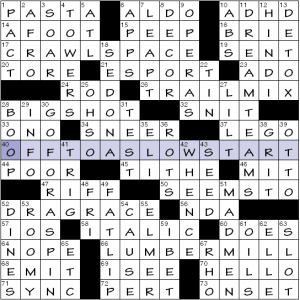 To be contrary, this will be a quick précis.

crawl, trail, drag, lumber. Of these, trail feels slightly off, being a relative descriptor, while each of the others SEEMS TO (50a) convey the required meaning on its own.

However, I’ve just consulted m-w dot come and this definition is given for sense 2:

so I guess that settles that.

Completely irrelevant but I noticed that an S can precede the first and last entries to make scrawl and slumber.

I riffed on riffs!

Good morning everyone! I hope your weekend has been sunny, restful, and filled with friends and grilled food items. Today’s puzzle plays on how “shy” can mean “falling short.” Vertical theme answers (hinted at by “fall”) contain this letter string: THATS HYSTERICAL (“LOL”), I WISH YOU WELL (“Good luck!”), and OH GOSH YES (“Of course!”). Cool how these were all clued in a similar style. 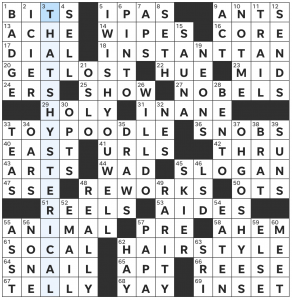 Since the theme answers were vertical, we got some fun across stuff, like GET LOST and HAIR STYLE. Thoughts on INSTANT TAN? I’ve seen this in lots of puzzles– it’s length + friendly letters + evocative image make it nice fill, I suppose. I’m harsher than most when it comes to phrases that I think don’t *quite* appear in the language (I believe I’ve complained about “internet bot” and “NBA MVP” on here before), and to me this is one of them. I’ve heard “fake tan” or “spray tan” (although this clue discusses bronzer, which wouldn’t apply to the latter) and not much else.

That’s all from me! I’m off to the beach with a Swell bottle full of mezcalita. 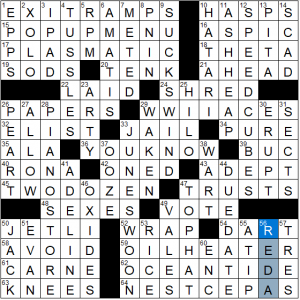 Pretty breezy as BEQ goes today, in my opinion. I was helped by XOLO [2d Mexican hairless dog, familiarly], which I’d seen recently in a Brooke Husic puzzle. SUCKS WIND [9d Breathes heavily] is a colorful entry that brought a smile to my face.

Unusually, I didn’t get a ton of pop from the 9-stacks — punny clues are de rigueur for POP UP MENU and the like. Today, it’s [Window frame?]. I was similarly on the scent for [62a Current event?] for OCEANTIDE. On the other hand, I quite liked [12d Toys for people who solve mechanical puzzles fast] for SPEED CUBES, and [28d Place that sells a lot of keys] for PIANO STORE. In general, a nicely connected grid, and while there were some entries (mostly proper nouns) I wasn’t sure of, there was plenty of lower-hanging fruit to help out. 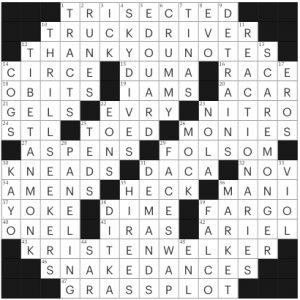 Pretty grid, no? This 62-worder has a frame of 11- and 13-letter entries that intersect at the corners. This was nowhere near as hard as I expected for a Monday TNY puzzle—played like an easyish Fri NYT to me.

Do people really use GRASS PLOT? Feels off to me.

Fave clue: 27a. [ Makeup of Pando, a grove of more than forty thousand trees connected by a single root system], ASPENS. I knew about interlinked aspens but not Pando.