We’re looking for a six-letter word this week. The center down entry (POCKETS) was thematic, clued as “There are six on the sides in pool.” I looked to the sides, spotting six black squares. I took to brief detour pondering MASSESHOT (“It causes the cue ball to curve”), which lead nowhere. 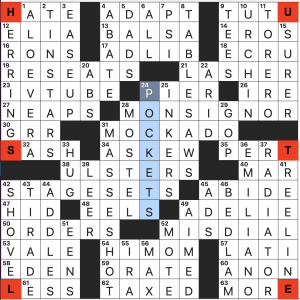 TUT/SURER opened the mechanism for me, becoming TUTU/USURER once I filled the empty pocket (upper northeast in that case): the six pocket squares (the four corners plus the left/right center squares) formed new grid entries once a letter was added:

The added pocket letters spell HUSTLE, our contest solution. That was the obvious answer (matching “Pool” in the title). As far as I could tell: those were the only letters that worked, but I spent some time circling back to the grid, trying to match the new words to something else. HATE/HERRINGS (kind of) matched IRE  (“Outrage”) and EELS (“Reef residents”), but that rabbit hole died quickly. I suspect I had a lot of company on that front. I knew I had the answer, but how did the other title word “Dirty” match?

I compared my post-solve notes with my friend Gideon and he clued me in. Here’s Matt Gaffney’s explanation: cheater squares, ‘are black squares that don’t add to the word count of a puzzle (they’re termed “cheater squares” since they indicate that the constructor couldn’t fill the grid without their help).’ Mike clearly didn’t need to cheat and included them intentionally as part of the mechanism, explaining the “Dirty” part of the title, locking in the answer.

Solvers: let me know how you did, and if you spotted the cheater angle (as my pal Gideon did). We’ll end with The Hustle, by Van McCoy. I try to avoid ending with an obvious song, so I searched for various covers, but nothing came close to the original. The search was worth it however, leading to this amazing mashup of various videos by Perfume, a J-Pop band from Hiroshima, set to The Hustle. Here’s a couple of original videos in that mashup.