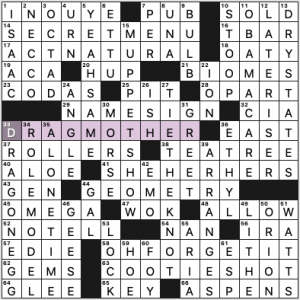 The short fill felt maybe a bit more clunky than I like, somewhat offsetting the juicy long fill. But then the Pride vibes gave me the warm fuzzies, offsetting the negatives. Four stars from me. 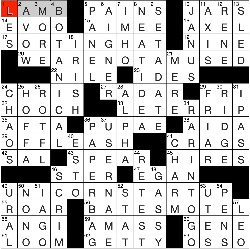 Not gonna lie, I’m feeling a little cheated of a challenge here. 2:19 is a time I’d more typically post up on a Tuesday or Wednesday, not Saturday. This is not to say that it’s a bad grid — there were some nice entries to like. But it was clued such that I think it would’ve made more sense as a Universal Freestyle.

I did say there are some nice entries to like, such as:

Taking a second look, I wouldn’t say the ease of completing this is entirely about how the puzzle was clued. There are a total of 54 4- and 5-letter words (compare with last Saturday’s, which had 30; granted, there were a ton of 3s in that puzzle and not in this one). That meant that around the periphery of the puzzle, I didn’t need to look at the clues at all for much of the solve because there were more areas where 4s and 5s were crossing each other. At least the 3s in last Saturday’s grid were more frequently crossing longer stacked entries, where the 3s are needed as toeholds and you have to pay a bit more attention to the clues. This was too easy!

Not a bad puzzle, just not right for the venue IMO. 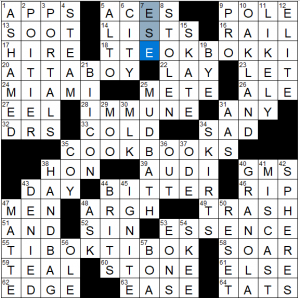 Erik has found food-related words with two instances of the letters “OK” to pair with the phrase “OK 2 Eat”:

The fill is gently clued IMO, helped by a high word count and offsetting the unfamiliarity of the themers — though hopefully they won’t be unfamiliar for long, as each looks delicious — so not a lot is jumping out at me. I did have a fun challenge early on navigating the TTE- letter pattern of TTEOKBOKKI and BII- of BI ICON [21d Loki, for example]. 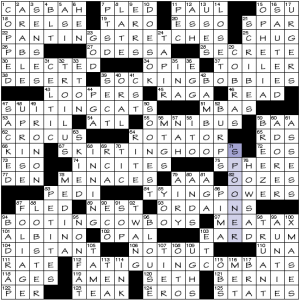 Rather than try to articulate what’s going on with the theme answers, I’ll first let the relationship to the original phrases make themselves evident.

As you can see, there’s a sort of transposition going on. “X Ys” becomes “Ying Xes” (with any necessary spelling adjustments made. While not quite a spoonerism (71d [Cleric noted for verbal gaffes] SPOONER), which involves morphemes, these are a type of metathesis in which larger components of words are switched around.

THEME: Women of note in the LGBTQ community. 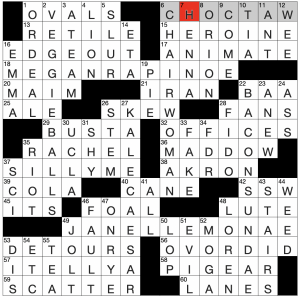 I know this says “Freestyle,” which is synonymous with “Themeless,” but there is definitely a theme here! Flowed like.a themeless for me, and jam-packed with excellent entries. In addition to the main themers we also have a diet theme of sorts: If you start your meal with VEGGIE BALLS, follow it up with a KALE CAESAR, you need not feel guilty before indulging in that BACON SUNDAE! Loved all of those entries.

Nods to women in general throughout, including CHAIRWOMAN (odd that we feel the need to use “certain” in those types of clues… [Certain committee head]… clues do that whenever not referring to “the accepted norm.” I think we can safely move past using that word. CHAIRWOMAN doesn’t need the extra qualifier imo). Melissa Etheridge and Sojourner Truth made an appearance in the clues. [Queen of the hill] for ANT.

FDR and Young MC are the only references to males not in the LGBTQ community as far as I can tell (George Takei is mentioned in one of the clues). I have a feeling if BUSTA and FDR weren’t absolutely necessary in the fill, they’d be nixed. 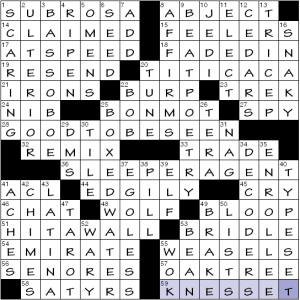 First place I was able to start was in the lower left, with 47d [Cartomancy set] TAROT and then the rhyming 56a [Telenovela fellas] SEÑORES. Then 41d [Pains of a person] ACHES, but then I {51a} even though I didn’t yet know what that was.

So I moved on to the upper left, where I was able to gamble on 1-down ending in -ING, thence 21a [Curling equipment] IRONS and 24a [The point of anything] NIB. In short order I was able to piece together nearly the entire section, but then—stuck again.

I still don’t even understand this one: 57a [The buck stops here] OAK TREE. Just a complete mystery. addendum: Okay I think I’ve got it (memory kicking in). This was a quote by Harry S Truman—I knew that—but now I’m recalling or at least convincing myself that one of his nicknames was the Oak Tree, so that’s what I’m going with, no internet searching to confirm.

In the top right, I was able to get a solid start with 9d [’50s free verse] BEAT POETRY. So I thought 8a [The absolute worst] had to be ABYSAL, and 10d [Sci-fi word Merriam-Webster is watching (but “No robes required”) YODA; this decided for me whether 11d [Give a seat to] was STAND or ELECT (i.e., that it was the former). Needless to say, that all turned out to be a failure, for 8-across was actually ABJECT and 10-down JEDI, with 11-down the other possibility. Sheez.

Returning to 32-across, I recommend the Everything is a Remix video essay series if you haven’t seen it.