Hi, everyone! Today’s puzzle by the Christina / Katie powerhouse pair has us truly book-ed and blessed. Let’s dive in! 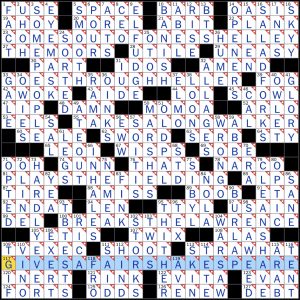 23A: COMES OUT OF ONES SHELLEY [Looks up from reading “Frankenstein”?]
– 33A: GOES THROUGH HELLER [Reads “Catch-22,” “Closing Time” and “Something Happened” – and doesn’t stop there?]
– 55A: TAKES A LONG WALKER [Borrows “The Color Purple” from the library instead of “The Flowers”?]
– 81A: PLAYS THE FIELDING [Listens to “Tom Jones” on audiobook?]
– 100A: BREAKS THE LAWRENCE [Reads “Lady Chatterley’s Lover” so many times its spine splits?]
– 117A: GIVES A FAIR SHAKESPEARE [Donates some copies of “King Lear” to the Renaissance Festival?]

This puzzle was quite the literary field trip and got me geared up to tackle some summer reading! I liked how consistent and parallel this theme set was – not only was each author pun at the end of the them entry, each was based on a solid in-the-language phrase, and each clue made sense of the themer. My favorite was TAKES A LONG WALKER – I’ve never read “The Flowers,” but I know now I could pick it up on a day where I might not have as much time to read. On the other hand, my Southern ear hears “breaks the law” and Lawrence as different sounds (or maybe I hear it as lore-ence rather than Law-rence?), but that didn’t minimize the enjoyment of the theme for me at all. All in all, a fun, erudite, and bright offering that had me enjoy my time solving it. Bravo to the constructing pair!

Random thoughts:
– This puzzle felt quite clean to me! I also appreciated how many women and people of color were included throughout this grid – I know it’s not something that everyone care about, but it’s something I notice and value when I’m solving puzzles.
– 30A: PART [Split hairs?] – This was a cute clue.
– 44A: LOL [The joy of text?] – This one, too. (And this clue could have been an alternate title for this puzzle!)

That’s all for now – I hope you’re well and enjoying Pride month!

The revealer today is PROVERBS (111a [Book after Psalms … or, read as one, two or three parts (as indicated by the stars), this puzzle’s theme]). During the solve, you may have noticed the various stars attributed to some clues. The clues with one star lead to actual PROVERBS. The clues with two stars lead to PRO VERBS, i.e. verbs that start with the letters PRO. And the clues with three stars lead to the entries involved with the circled squares, i.e. the ones where you find PR OVER BS. 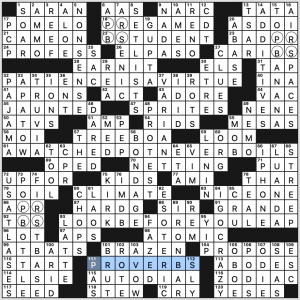 Whew! That’s a lot to keep track of. Pretty nifty to get that much wordplay out of one word. I will admit that I found the last one (PR OVER BS) to be a bit hokey, as if anyone would care that you could stack those four letters. If that was the extent of the theme, I’d just roll my eyes. But put it all together and it makes for a nice change of pace.

There’s theme material everywhere in the grid, but there are still plenty of nice fill entries like: SET LISTS, TOP BANANA, AIR SPACES (though it sounds weird in the plural), TREE BOA, POP BOTTLE, FIRST BASE, ESOTERIC, SPRITES, AUTO DIAL, ZODIAC, “NICE ONE!,” and the ’70s song I GO CRAZY. Not sure I’ve ever heard JAUNTED as a past-tense verb.

I wasn’t crazy about all of the theme, but it’s an impressive amount of wordplay packed in one grid. Plenty of strong fill to enjoy. 3.75 stars.

THEME: A rainbow connection! The grid is divided in half, and a “bridge” of color unites them. 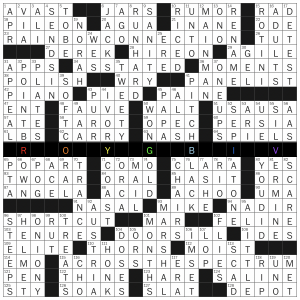 In the black separation line: ROY G. BIV (and if you solved in the webapp, you were treated to the actual colors as shown in the solution grid here).

Both of those serve as either bonus answers or revealers… take your pick!

What a wonderful, thoughtful, and tight puzzle to kick off June. A subtle nod to Pride Month, but taking its own course. Anytime construction starts dabbling with a color-dependent theme, big risk is involved. Colors as themes have been done. Done. To. Death. I remember reading somewhere, perhaps in Patrick Berry’s handbook, that if you take on such a theme (and I believe he even used colors in his example), then it better be something that hasn’t been done.

There are so many elegant aspects here, it’s difficult to know where to begin. First of all, each of the longer entries as a whole (as clued by the top half’s down entries) contains a color: BROWN, CORAL, IVORY, GOLD, BLACK, SEPIA, SILVER. None of those colors is represented in the ROY G BIV spectrum. It’s almost like one group of tones is giving a polite nod to the other:

“Hey other tones. Sorry we always get all the attention. You guys are pretty cool too.”

Next, and this is pretty wild given the last constraint I just mentioned, the white parts of the grid are still valid crossword fill. This is a Birnholz standard, but I would’ve given him a pass on this one since the theme is so dependent on using colors already in the longer answers: POINT B, SOFT C, WON, PITCH, SEP: All valid crossword fill. Never heard of IVOR, but let’s see what that is: used 27 times according to xwordinfo and often clued as [Composer Novello]. SIL used 136 times and clued frequently as part of RSVP. The bottom halves also follow the same rule, and they’re all clued independently: OWN, RAL, COAST, OLD, LACK,  ATONE, ERMINE. RAL being the funkiest of those, but clued as North Carolina’s capital. Slow clap for SIL / V / ERMINE. That’s quite a find.

The colors are all spaced beautifully apart. The bonus answers are perfectly apt. I mean, this is one helluva puzzle.

Also, and this could be due to the fact that I solved this whilst on a school bus transporting a load of high school freshman to Six Flags- which is a challenge in and of itself- but I found this one very difficult. Last week’s puzzle visited at the ground floor of crosswords, and then this week, the elevator shot right up to the penthouse! Ironically, the easiest part of the puzzle was RAINBOW CONNECTION, which was a gimme [Top 40 hit sung by Kermit the Frog… and what you’ll need to join both halves of this puzzle]. But the rest I found very challenging. I was steadfast in refusing to jump to the bottom half of the puzzle until I had figured out the top half and/or sussed out the theme. But even with the RAINBOW CONNECTION nudge, the theme wasn’t immediately clear.

The icing on the cake was the programming by AmuseLabs to create the rainbow within the black void (I was lucky enough to solve on the webapp). I think WaPo has the best online solving experience out there. I can think of a publication or two who might want to go knock on AmuseLabs’ door…

The fill experience was fine, of course, but I have difficulty remembering anything that stood out simply because it is so very upstaged by the theme.

Oh yea… there’s this: [Doc with solutions for a labyrinth?] ENT. I assume that “labyrinth” is referring to, I dunno, the ear canal or something? Ah yes… google tells me I assumed correctly. But did anyone else really, really want to enter VET for that?

Thanks for this one, Evan. It’s perfection.

I’m so confused by the 15x Universal Sunday. Like, why is it so elusive online? At this site, the Saturday puzzle is featured for two days, and the Sunday is never featured. Also, is it themeless, or isn’t it? Are we in a transition phase? Also, if I’m being honest, it frequently seems to be the red-headed stepchild in comparison with the rest of the week’s offerings.

Why wasn’t this one run yesterday, during a themeless day (“freestyle” day) when yesterday had a themed puzzle but called itself themeless? Why do they call it “Themeless” sometimes and “Freestyle” other times? What’s the difference? 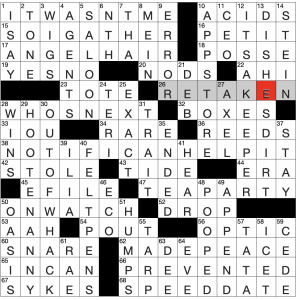 That sounds like a disjointed conversation. Lots of dialogue in this puzzle :) but nothing OUT OF WHACK!

I really liked the old timeyness of HOOTENANNY, though I confess I did not know the spelling.

Wanted BAGS for [The can be checked or packed]. I wonder if that was intentional misdirection. BOXES seems less apt. Yes, they’re checked in a different sense of the word, but “Pack a box” doesn’t seem like a thing I’ve heard, even though one certainly may pack a box. I just feel like those types of clues should be spot on or not used at all.

Some clues are a little too cute for me such as [Strands at a buffet] for ANGEL HAIR. Sounds like a very specific type of buffet that perhaps the clue should’ve suggested. [Goes through some ups and downs?] seems a bit dramatic for NODS.

Other than that, a standard issue simple themeless!

Theme: Each of the theme answers include the word RIDE shared between two words. 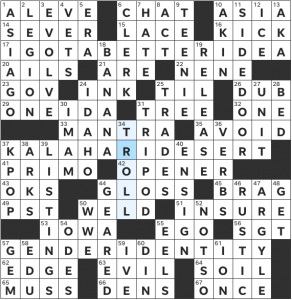 I thought these were great themers. In retrospect, I should’ve started solving exclusively on Downs first, as I wanted to enter I’VE GOT A BETTER IDEA, which is clearly too long, and so I caught up with both this themer and KALAHARI DESERT on the crosses. GENDER IDENTITY was pretty quick to fall in at the end, and it fit smoothly with the final section of the grid.

Based on the distribution of the black squares, I definitely spent most of my time up top down to MANTRA and AVOID. Then, I switched over to Downs and cruised through most of the puzzle pretty quickly. The puzzle’s asymmetry felt like a very unbalanced solve time-wise, especially since the word lengths varied enough that I was a little disoriented but it still worked together really smoothly. I thought that 46d [“Like cottagecore”] RUSTIC and 47d [“Diamond pattern”] ARGYLE were fun sixes to have in that lower corner.

Overall, this was a fun puzzle! It definitely had its twists and turns, but in a good way! 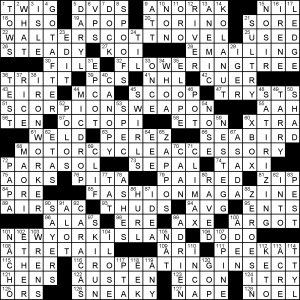 Mocktails are cocktails without the alcohol. Today’s puzzle by Doug Peterson features the non-alcoholic origins of the names of various cocktails. We have:

There were too many tricky clues, but here are some worth noting: