Theme: This one’s a bit complicated to explain without the answers as context, so let’s jump into them: 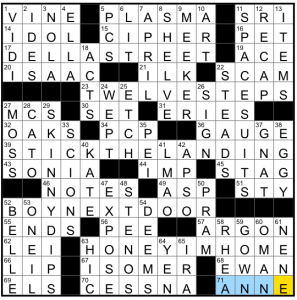 So, the theme progresses from the STREET, to the STEPS, to the LANDING, to the DOOR, before the speaker enters their HOME.

When I solved this puzzle online, I noticed the highlighted revealer, so I jumped down there immediately to see if it was any help. When I saw that it would require all the theme answers to understand, I went back to the top of the puzzle and solved it top-down. So once I had the theme answers in place, I went back to the revealer… and I still couldn’t get it and had to get it all on crosses.

HONEY I’M HOME feels straight out of old TV to me (although when I googled the phrase I mostly got a 90’s sitcom and a Shania Twain song). Combined with DELLA STREET, who I had never heard of, and the puzzle on the whole has a retro vibe. (In fairness, there are not many STREET phrases that don’t refer to “street” in a road sense). So overall, I’m not sure the theme stuck the landing (haha) for me. It’s a bit convoluted and hard to explain, and it also assumes a particular path – this felt a bit meta-funny to me, since HONEY I’M HOME still had me in the sitcom mindset, and normally you can’t even see the exterior of the houses there! All that being said, STICK THE LANDING and BOY NEXT DOOR are great entries.

Despite my inability to understand the theme while solving, I still nearly broke 3 minutes on my solve, which is pretty rare for me. And that came after drawing a total blank on 1a [Kudzu or ivy] – both VINEs, apparently. That’s a testament to how clean this puzzle is; I’m not sure I can see a single objectionable crossing.

We’re out to MAKE A SCENE with today’s grid (60a, [Be disruptive, or what you can do with the ends of 17-, 25-, 35- and 51-Across]). The other theme answers are familiar(ish) phrases whose final words can also be part of the scene-making process. 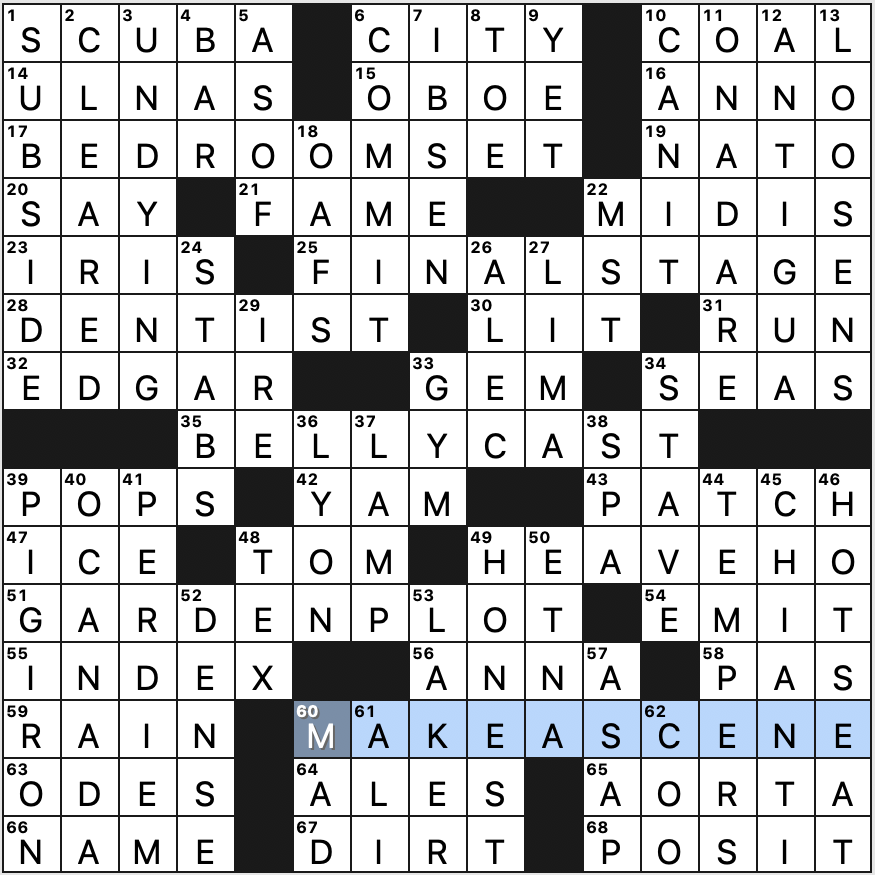 I was focused on the first words of the entries during the solve that I didn’t pay any attention to the second ones. Consequently I needed the revealer for the aha moment. Theme works well enough.

Never heard of a BELLY CAST. All I can say is I’m glad my wife never broached the subject of getting one. (They probably weren’t a thing 13+ years ago, anyway.) I did come across this gem of a quote, though: “It’s the only way to get plastered when you’re pregnant.”

The long fill mostly consists of stacks of 7s in the corners which have some nice entries: ANTIGUA, PIG IRON, CHIANTI, HOT SEAT. Plus, DENTIST and HEAVE-HO. 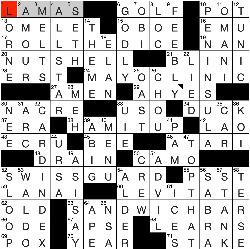 This puzzle is a big ol’ Dagwood — that is, a sandwich with plenty of layers. A trip down to the revealer at 63A [Spot to assemble the first parts of the answers to the starred clues] gives us SANDWICH BAR, and the first word in each theme entry is a component of a (not-kosher) sandwich:

It’s a nice touch that the theme entries appear in the order in which you would lay them down if making a sandwich: first the ROLL, then spread on some MAYO, and some HAM and SWISS on top.

Some uncharacteristically tough spots for a Monday: 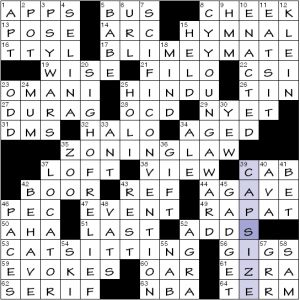 Not the most exciting theme, but it’s done well and the symmetrical entries feel natural, unforced.

Today’s puzzle gives us four answers with a W on the left and an E on the right, arranged symmetrically in the grid. WARSAN SHIRE (Poet who wrote “no one leaves home unless home is the mouth of a shark”) was new to me– I needed every crossing. (If you didn’t know TORO, that may have been tough.) WILL YOU MARRY ME, WORKOUT ROUTINE, and WHAT DO I CARE were the other three answers. It can be hard to place answers that are fourteen letters long, but the constructors did so very elegantly. 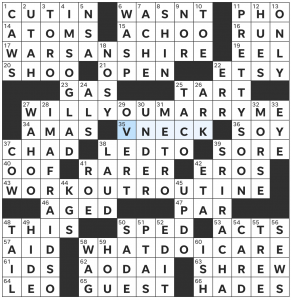 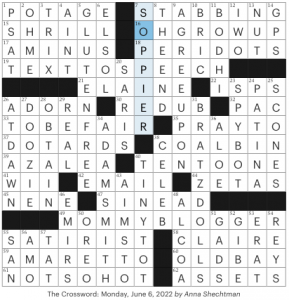 I couldn’t for the life of me find my error, so I used the Check function to identify the trouble spot. It was the O where SOPPIER and OH GROW UP meet—I had an A. I had an A because in U.S. usage, SAPPIER means [More schmaltzy] and sentimental. SOPPIER appears to be largely a Briticism. Why did I go with the terrible AH GROW UP? Because I had already filled in OH ME and figured OH wouldn’t be repeated so close by. (Personal philosophy: If your grid has either OH ME or AH ME, tear up that section and fill it anew. “OH, GROW UP” is fine.)

Didn’t know that [A.O.C.’s Courage to Change, e.g.] was a PAC, and I also didn’t know 24d. [Miller who won a Tony for her performance in the 2013 revival of “Pippin”] was named PATINA. I also hadn’t heard of the SPYBOT brand ([Cybersecurity brand with a “Search & Destroy” program]), so PAC was a guess. Would have been an easier section with PATINA clued as the common noun, but I’m pleased to make Ms. Miller‘s acquaintance. She’s done TV and film as well as being a Broadway star.