We’re looking for a four-letter proper name this week. I’ve been writing up the WSJ meta for Fiend since March 2021, and this was the third I couldn’t solve solo. Not a bad run, all things considered. There were four themers:

I spotted WAY/MAE/SAY/BAY, and knew they had to be thematic (narrator voice: they were). ANNIEMAE should have been ANNAMAE (Matt clearly did that for a reason). I noticed BAE and PEI. I saw BEAU (which could be transformed to BE GOLD). And then… it was Sunday. I know I shouldn’t care about streaks, etc. (as my wife correctly points out), but I pressure myself to solve solo and explain the mechanism clearly. One out of two ain’t bad (here’s to optimism).

I teamed up with a friend for a group solve on Sunday and we had similar notes. Fun fact: KLEE is pronounced CLAY (rhymes with MAE). I got a nudge/shove from another solving friend with the deadline looming: the theme is pig latin. For example: ANNIEMAE becomes MANNY, mapping back to words in the clues. 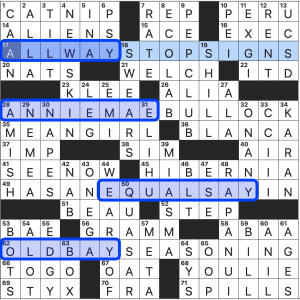 The mapped grid answers spell eBay, our contest solution. I try to end with a song that connects to the theme, but nothing’s coming to mind, so we’ll end with serendipity. I saw this tweet and realized that I’ve heard this song a million times growing up but never stopped to listen to the lyrics. So we’ll end with Iron and Wine‘s cover of Love Vigilantes.