Matt Jones’s Jonesin’ Crossword, “This and That” – Erin’s write-up 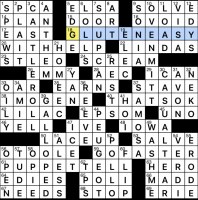 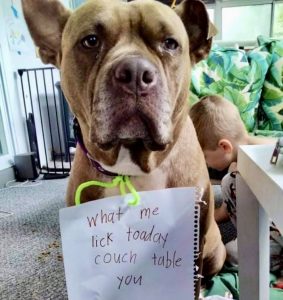 That’s all for today! Here’s a little punk to cleanse your palate before the next review.

With that title, I was fully expecting to see entries featuring the letters SHH turned downward. Frankly, I was relieved this wasn’t the case, because I think I’ve seen enough of those types of themes to last me a good while.

Instead, the title is synonymous with the revealer, “INSIDE VOICES” (51a, [Teacher’s remark to a noisy classroom, and a hint to the circled letters]). Those circled letters, found in familiar phrases, spell out three voice types. 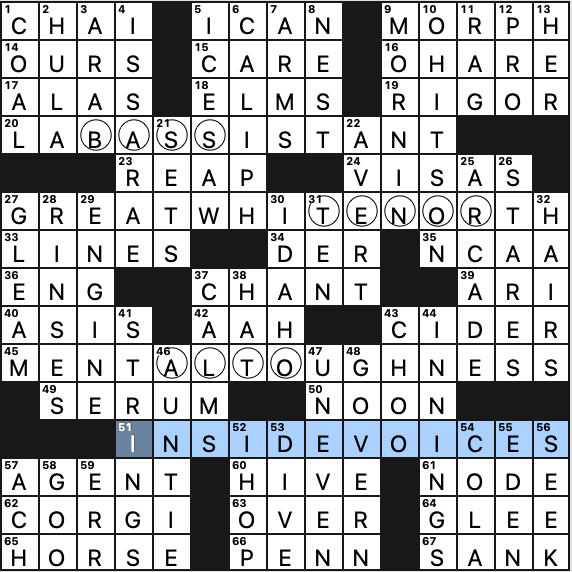 Fun entries, especially those last two. Missing are the voice types soprano, mezzo-soprano, and baritone…and countertenor and contralto, depending on what list you consult. It’s not surprising only three of the voices work in this grid given the length of the others. But three is enough when the revealer is long enough to count as a theme entry. Solid hidden-word theme.

I loved “OH, IT’S ON!” and the informal “MORNIN‘”. It’s also nice to see new crossword staple ISSA RAE fully named. Everything else is solid but not necessarily sparkly. 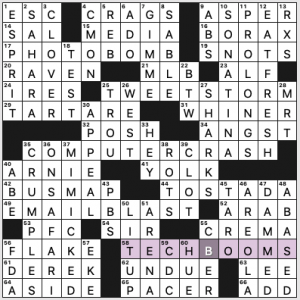 What a nicely imagined and executed theme! The revealer is 58a. [Big times in Silicon Valley … or a hint to 17-, 25-, 35- and 49-Across?], TECH BOOMS, and those four themers are all tech-related terms that end with things that make big BOOMS:

It’s elegant that each of those four is singular and the revealer is plural. 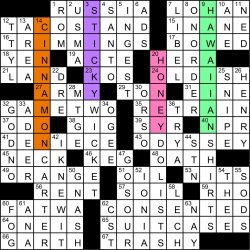 Good day, everybody! I hope you all are doing well as summer is fast approaching!

Today’s grid almost got me hungry enough to get the wheat bread from the top of the refrigerator and make myself a sandwich. Though that didn’t happen, there was bread stored at the top of this puzzle, with the four long down entries all starting with words that are types of delectable buns.

Along with all the bread, there is a stack of nine-letter entries that continue the food theme, with both TACO STAND (12A: [Provider of Mexican street food]) and TRIMMINGS making the mouth water (16A: [Items traditionally served with a Thanksgiving turkey]). One thing that definitely stuck out to me was seeing USMA (2D: [Sch. at West Point]) in the same grid as ARMY, given that those two can be used interchangeably when referring to the school (27A: [Major employer?]).  Love the earworm that’s provided when putting in DENIECE, and now I need to remember the last time I watched Footloose, and I’m pretty sure I haven’t watched it since, at the latest, 1992 or so (41A: [“Let’s Hear It For the Boy” singer Williams]). This might be the best grid I’ve solved this year for one reason: the inclusion of my alma mater, with both SYR (39A: [Medit. nation]), if reimagined as the abbreviation for Syracuse, and ORANGE, Syracuse’s mascot, both in the puzzle (49: [Carroty color]). Let’s Go Orange!

“Sports will make you smarter” moment of the day: SANTO (4D: [___ Domingo (Caribbean capital)]) – One of the most adored athletes in the sports-mad city of Chicago, former Cubs third baseman and broadcaster Ron Santo was one of the great third basemen to ever play…yet took much longer than it should have to get his due in Cooperstown. The Cubs teams during his time in Chicago (1960-1973) were not that great, but Santo was; he was a nine-time All-Star, a five-time Gold Glove winner and had four seasons where he hit over .300 and also four seasons where he hit at least 30 home runs. Playing a position known to produce power hitters, Santo remains the only third baseman in MLB history to have at least 90 RBI in eight consecutive seasons. All this, and he performed his whole career while battling diabetes. Despite those credentials, Santo is probably best known for coming up just short of induction to the Baseball Hall of Fame in every year he was eligible while he was alive. Santo died in 2010, and the Golden Era Committee voted Santo into the Hall of Fame posthumously in 2012.

Hey folks!  I’ll be covering the LA Times Tuesday puzzles for the month of June while Jenni’s on vacation. Full disclosure, I very very rarely solve the LA Times, so I’m excited to try out some new puzzles! 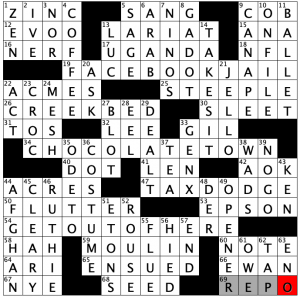 So, the last words of each theme answer can make phrases with “get out of”, such as “get out of jail”, or “get out of bed”. Pretty neat! I had no idea what was going on for the majority of the solve, but as soon as I got the revealer I understood everything, which is a great feeling to get from a crossword. I actually had some trouble getting the theme answers:  I didn’t know the term FACEBOOK JAIL and I thought “channel” was referring to the English Channel (I’m gonna blame the capitalization for that one), so I wasn’t expecting something as small as a CREEK. I also didn’t know CHOCOLATE TOWN, but the HersheyPark clue made it pretty easy to get once I had a few letters in place.

As a new LAT solver I’m not sure what this puzzle’s difficulty is calibrated at, but I found it to be squarely in Monday NYT time for me. I struggled the most right off the bat when I didn’t know that [Multivitamin mineral] was ZINC; that could have been anything to me. I also wanted “lasso” for LARIAT and “husk” instead of COB for the corn discard. Thank goodness for Rachael Ray and her love of EVOO – that’s “extra virgin olive oil” for those of you who don’t religiously watch the food network – that answer got me back on track. 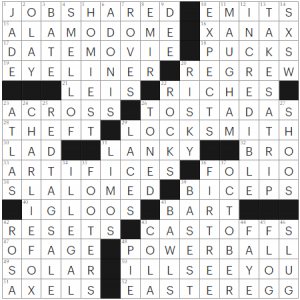 Just a really smooth, flowing puzzle, with lots of fun entries and clever clues. A joy, however brief, to solve.

Not sure what to highlight as I re-tour the grid. Have a bunch to do today and need to get an early start. 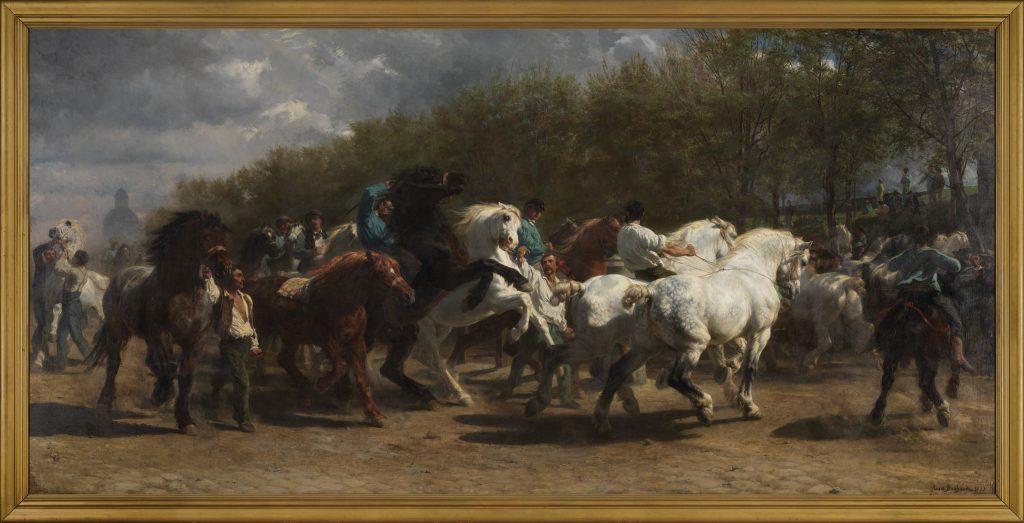 THEME: SM is added at the beginning of common phrases to create wacky new ones. 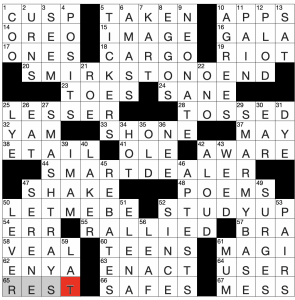 I really like this one. Sure, the idea is nothing new, but the resulting phrases are pretty good! Lots of wackiness and funny visuals. SMARMY BASE for the win. Anything with the word SMARMY is a win.

The grid features L/R symmetry, but oddly enough, three of the themers still cross. SMART DEALER is bookended by SMASH TRAYS and SMARMY BASE. Pretty nifty.

Speaking of bookending, I enjoyed the clue for MAY [What aptly bookends “Memorial Day]. I like those Betcha-Never-Noticed-This-Before type clues (as long as they are indeed apt, and not just random word-within-word finds).

NEONATE is a new word for me. I like it. I’m going to use it often.

Love the revealer in the title today!

Loved today’s puzzle and hit a personal record! While the title might suggest otherwise, it’s an excellent, focused, and fun solve! 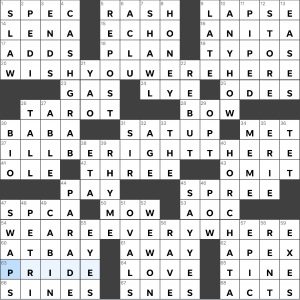 USA Today, June 07 2022, “All Over the Place” by Enrique Henestroza Anguiano

Theme: the end of each themer is a location

Ah, WISHYOUWEREHERE is such a classic phrase but in agreement with the cluing, not one I write anymore. ILLBERIGHTTHERE also immediately filled in for me upon reading the clue. It’s amazing when 15s are such a perfect fit! WEAREEVERYWHERE took me a few moments longer than the others but not much. Truly a fantastic themer set. The ordering of the themers is superb as well, given that it’s a common phrase on its own. Also, it’s a Beatles song though I’m not familiar with this love ballad.

Great clues, entries, and an excellent theme and themer set made it easy to include this in my all-time favorites. It had a nice flow and I really enjoyed the grid as well. Just delightful!