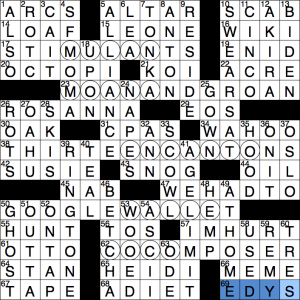 hello and welcome to episode #731 of matt gaffney’s weekly crossword contest, “Interior Shots”. i solved this week 1 puzzle without the instructions, i think. what are the theme answers? there are five long across answers:

anyway, these answers all have the name of a disney movie hidden: MULAN in STIMULANTS, MOANA in MOAN AND GROAN, ENCANTO in THIRTEEN CANTONS, WALL-E in GOOGLE WALLET, and COCO in CO-COMPOSER. the latter two are pixar films, specifically, but pixar has been a disney subsidiary for quite a while now.

so the answer is just disney, right? i mean, week 1, has to be… but when i went to look at the instructions before submitting, i found that it said This week’s contest answer is a noted American of the 20th century, which is definitely not what i was expecting. i guess walt disney does meet that description, but the connection of walt disney the person to these films is secondary rather than primary. so that was a little jarring. but hey, i submitted just “disney” and my name showed up on the leaderboard, so all’s well, i guess.

this is at least the second mgwcc that i can think of where disney has been the meta answer. the previous instance was from five years ago, and that meta had to do with disney theme parks rather than movies. so quite a different theme and a totally different mechanism. for this one, i thought it was not quite as interesting to find MOANA “hidden” right at the start of MOAN AND GROAN, and WALL-E hidden entirely within one word of GOOGLE WALLET, but basically the meta was fine.

matt gives us a peek into the workings of his fevered brain with the clues {Kind of fish, or what it says when escaping capture by predators (I’m guessing)} WAHOO and {Friend of Eve and Bob, assuming people with palindromic names like to hang out with each other} OTTO. those were amusing.

anyway, that’s all i’ve got this week. how’d you all like this one?