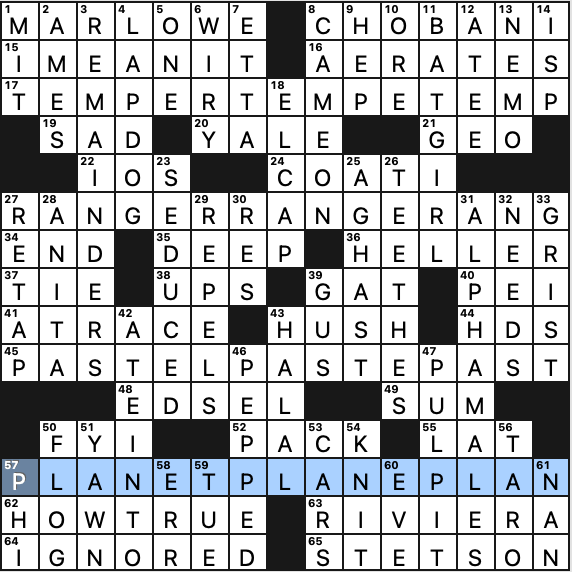 This type of theme can get overly strained really quickly as unrelated words are forced together. While I didn’t love these, they weren’t so bad as all that. The last one made the most sense to me.

Top fill: ALPHA MALES, BATGIRL, LAP DOG, MARLOWE, CHOBANI, “I MEAN IT!,” “HOW TRUE,” RIVIERA, and STETSON. Not bad considering the theme takes up so much space with four grid-spanners. Not keen on A TRACE and RETAP.

While I wouldn’t say the theme shines, it does have some good wordplay. 3.5 stars. 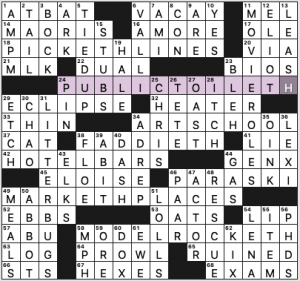 Add-a-letter themes are often pretty flat, but I enjoyed this one. Words ending with ET pick up an H so that it soundeth like an old-timey verb:

The grid would have had a little more flexibility without the central FAD DIETH but really, aside from OAST, the fill is pretty good. Fave fill: VACAY, MAORIS, HOTEL BARS, PARA-SKI, LITTERBUGS (good clue: [They may leave a lengthy paper trail]).

I’m not sure why this puzzle took me so long. Tired? Or were the clues on the tougher side for a Wednesday? I mean, this shouldn’t have taken me a Saturday amount of time. 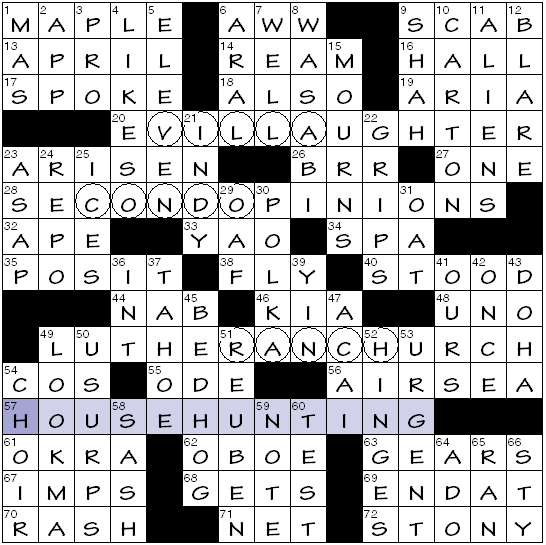 Flew through this one, so the central (non-theme) entry was not accurate in my case: 38a [Experience turbulence, maybe] FLY. Maybe not!

And there you have it. I’d be greatly surprised if such a basic theme hasn’t been done multiple times previously, but that in no way detracts from the current offering. It’s a nifty  bit of consistency that all the hidden homes are 5 letters long. 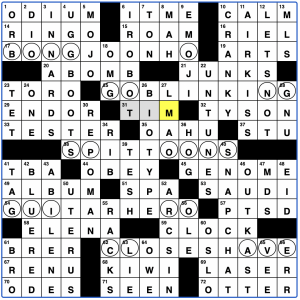 AVCX editor Ben Tausig has today’s puzzle, and the title tells you all you need to know about what’s going on with the circled squares in each theme entry:

Each of the circled sets of letters forms an instrument in the rhythm section – BONGO, GONG, SPOONS, GUIRO, and CLAVE.

Editor: Erik Agard
Theme: The last word of each theme answer is the name of a Miami pro sports team. 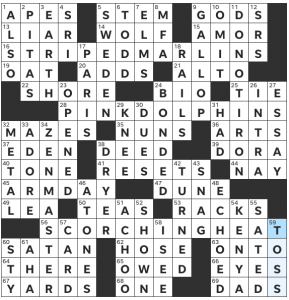 What, no love for Inter Miami FC??? Despite the title, after getting the first two theme answers I was sure the theme was marine-life related. It was only after I got SCORCHING HEAT that I saw the actual theme. I’m a sports fan, but I have never cared much about Miami in particular, so this theme didn’t connect much with me. I also found the theme answers to be a little straightforward, although PINK DOLPHINS are really cool!

The rest of the puzzle was, similar to the theme, clean if a little straightforward – there was nothing bad, but very little that wowed me. ZEN MASTER is great, although its counterpart in DO NOT IRON was nothing special (maybe this is because all of my clothes might as well say “do not iron” on them based on the amount of times I’ve actually ironed anything). I didn’t know if the 5d [Most populous Nordic country] was SWEDEN or Norway, and I also didn’t know TODD 6d [Figure skating champ Eldredge], so the top middle took a while to come together for me. Oh, and  I didn’t know 52d [Poet and activist Suzan ___ Harjo] was SHOWN, and the clue on TEAS was such that I wasn’t sure if it was plural or not (50a[Genmaicha, etc]) so the S was an educated guess. 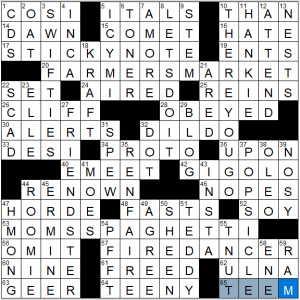 May continues to kick my ass, weeks into June. Here’s the solution grid. MOMS SPAGHETTI, FRIENDSTER (I never had an account there), and FIRE DANCER were highlights for me. 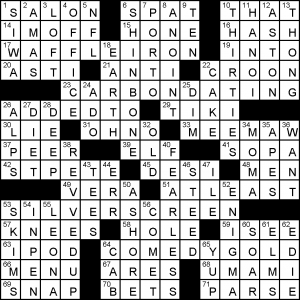 Today’s puzzle by Hoang-Kim Vu & Wendy L. Brandes features phrases with four of the 118 elements; three metals, one non-; in one half of two-part phrases. The clues take the form of a snowclone: [There’s an element of ___ to it?]. [Doubt] is for WAFFLEIRON; [Romance] for CARBONDATING; [Mystery] for SILVERSCREEN; [Humor] for COMEDYGOLD. This extra layer of cuteness forces the clues into being rather ill-fitting in several cases, though.

A similar vibe to many Wednesdays of late. Mostly quite easy, but with mostly carefully spaced “new” entries seeded throughout:

EDIE Brickell to sing us out…