I was just saying the other day how I felt I’d seen enough turning themes to last me for a while. So here comes Lynn Lempel with another one. My response? It’s Lynn Lempel, so you know it’s going to be good.

The central revealer is LET DOWN YOUR HAIR (38a, [Words to Rapunzel, and a hint to solving four puzzle answers]). The other theme answers are familiar phrases that feature a hidden hairstyle. Said hairstyle turns Downward before the entry finishes off in the Across direction. 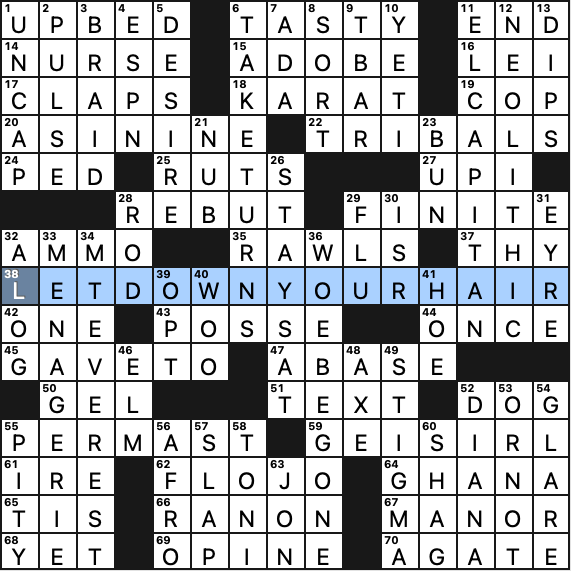 What makes this better than most turning themes (for me, anyway) is that the “turned” letters are whole words that are different in each case, and they’re given clues that have nothing to do with hairstyles (BRAID notwithstanding). So I enjoyed this and was even to get the last one without any crossings.

And of course the rest of the fill shines, just as you’d expect from a veteran constructor. We have TAKE TURNS, EL CAPITAN, NEOLITHIC, MT EVEREST, MENAGERIE, ASININE, and WOEBEGONE. Lovely stuff. 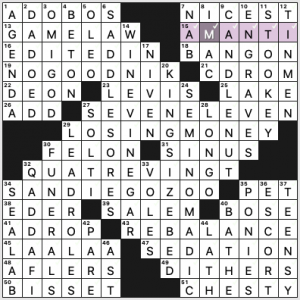 Listen, I was close to falling asleep before I even started this puzzle, so it’s time for sentence fragments.

Not keen on EDER, A DROP, AFLERS (eww), DADOED. 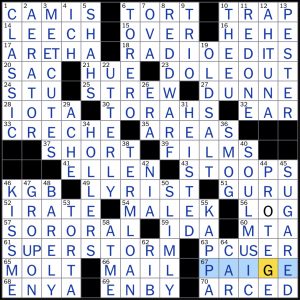 The middle of today’s grid suggests there are four SHORT/FILMS hidden inside the puzzle (37A: With 39-Across, some Sundance submissions… or a hint to four squares in this puzzle), and indeed we have four rebus squares that affect the grid:

I can’t figure out where it was, but I think I’ve seen this exact same group of movie titles used in a similar way before.  That’s not surprising, given that the list of two-letter movie titles is pretty small, but it meant I had a real sense of deja vu once I had the aha of what was going on with this puzzle.  I still enjoyed this one, though! 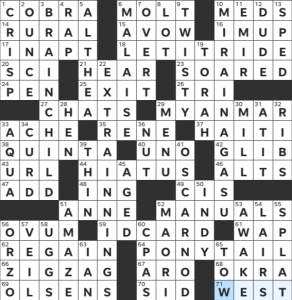 A classic USA Today theme type today, but one that is elevated by the high quality of theme answers. It’s also neat that the “rain” is split differently in each answer, and begins successively later. I wasn’t sure I knew MIRAI NAGASU, but once I got a fair amount of the letters in her name I realized I remembered her from her stint on Celebrity Big Brother this February… crossword knowledge can come from anywhere, I guess.

Favorite clues: 32d [Bones in a cage] for RIBS, I was so confused what this meant for the longest time! I also loved 28d [Mother clucker] for HEN, for obvious reasons.

Random hangups: Anyone else never know, when faced with a clue like 41d [Recognition from the Academy], if it’s OSCAR NOD or “Oscar nom”? It’s a constant struggle for me. Also, I don’t really think of a PONYTAIL as an “updo”, which is a word I’d use for a style when the hair is even more constrained, like a bun.

Theme: Each theme answer crosses synonyms for “talk” or different ways of expressing oneself. 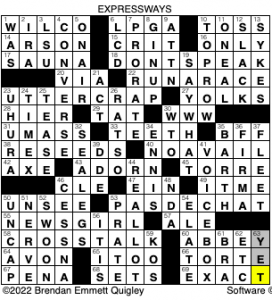 Revealer: 58a [“Unwanted transfer of signals, and an alternate title for this puzzle”] CROSSTALK

WOW. So much theme content here – 59 squares of it, in fact. I don’t know how BEQ managed to squeeze all of this in, but it was a great theme with some very fun theme answers. SAY WHAT and PRATE are perhaps the closest we get to a themer being directly related to speaking clue-wise, and I loved the use of CONVERSE (I have a pair on right now, in fact) and UTTER CRAP.

Great puzzle with a ton of theme content. It makes me want to spend a day with a thesaurus and an empty grid.

Good morning, folks! Puzzles like this make me wonder what the seed was. I liked STOP OBSESSING and FALSE POSITIVE and DOG SLEDS 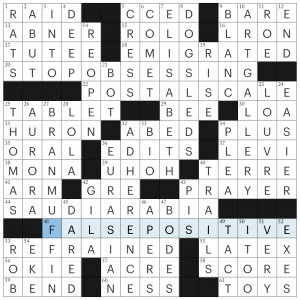 a lot. The lat. I feel like I’ve seen that sort of [Drawing room?] / ART GALLERY misdirect many times so it felt a bit stale to me, but I”m sure newer solvers liked it. It does feel like some of the long slots were used on entries that were a bit bleh like REFRAINED or ADHERENCE.

Liz’s puzzles typically have short fill I don’t like– in this case, L RON, APERS, ABED. I’ve hypothesized this is because she hand grids, but I don’t know if that’s true, just a guess. 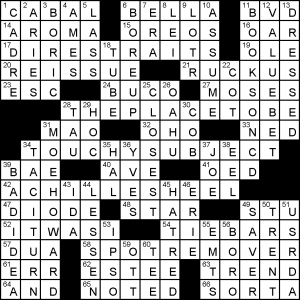 The one-word clues of today’s puzzles by Michael Schlossberg seemed to suggest clue reversal, but everything didn’t quite add up. The long answers were, for this genre, succinct and “in-the-language”, but they didn’t match the clues too exactly. As it happens, 58A is SPOTREMOVER, and you need to add “spot” to the end of the >clues< to make them match their answers. A refreshingly different theme angle! I wish it didn’t think of my patient Spotty who has second degree burns because the humans next door poured boiling over him, because he tried to mate with their dog (I see about one case like this a month, I’d guess); thankfully, most of you probably lack that association.

Despite the difficult grid design, with alternating 12, 13, 12 theme entries: