Maintenance alert: The site will be down for a tech update Friday morning, in the vicinity of 5-7 a.m. Central time. We’ll be back soon! 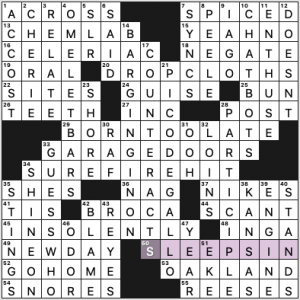 This puzzle played like a Saturday puzzle. I was kinda watching TV at the same time, but I had a couple wrong turns that slowed me down. For example, I had LINKS instead of SITES for 22a. [Blogroll assortment], and HORNING IN ON rather than BARGING IN ON for 14d. [Rudely interrupting]. And I don’t love 1a. [Puzzling start?], ACROSS—because that only really applies to print crosswords (where “Across” appears above the set of Across clues), and that’s a teeny portion of the puzzles I do.

Fill to ENTHUSE about: CHEM LAB, DROPCLOTHS, BORN TOO LATE, GARAGE DOORS, SUREFIRE HIT, SLEEPS IN (aspirational fill!), OAKLAND (53a. [Birthplace of the Black Panther Party]—and if you haven’t seen the Chicago-set Fred Hampton biopic, be sure to watch Judas and the Black Messiah sometime, it’s gripping), OMELET BARS, GUESS WHO, PICO DE GALLO, and CHATBOTS.

Four stars from me, as I don’t hold an extra challenge against a crossword! 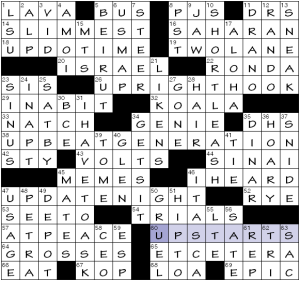 This puzzle offers a little extra, with a 16×15 grid, primarily to accommodate the central theme entry.

The revealer is DOWN AND OUT (62a, [In need, or two words that can follow both parts of each starred clue’s answer]). I’ve seen many a puzzle with two-word theme answers where each word can be followed by one keyword to make a familiar phrase, but I’ve never seen a puzzle theme purport to do this before. Each word in each two-word theme answer can precede both keywords in the revealer. Zoinks! 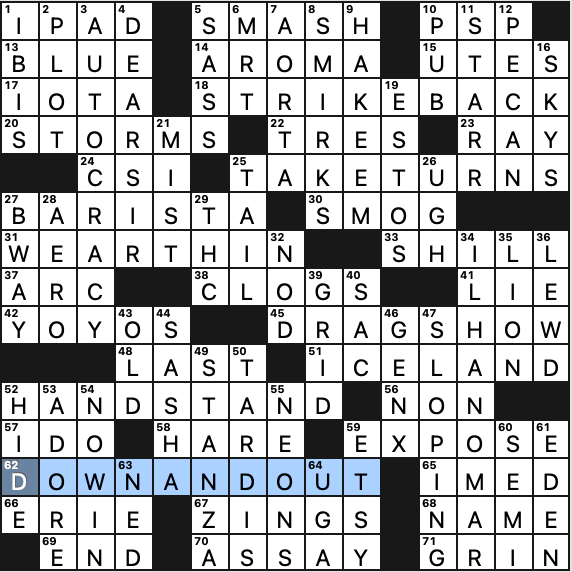 Impressive! Five legit theme answers means 10 pairs of phrases for a total of 20 phrases. And they all work. Nicely done!

In addition to all that wordplay, six long theme answers in the Across direction take up a lot of real estate and normally constrain the fill. But we’re still treated to some goodies here like DEAR SIR (I’m picturing Marcie from Peanuts with that entry), ILHAN OMAR, BARISTA, ICELAND, AUTOCRACY, EXPOSÉ and TARDIS. Not shabby at all!

An impressive theme and grid. 4.25 stars.

Theme: The first word of each theme answer can precede the word “STAR.” 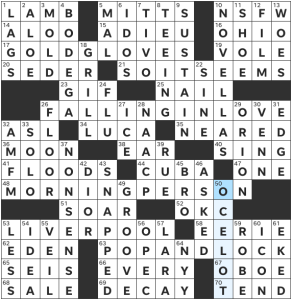 Four themers in a cute puzzle this Friday! This was a great and diverse set, which I really enjoyed filling in. My first thought theme-wise had been that it was going to have to do with medals since the first one up was GOLD GLOVES (appropriately located not too terribly from 5a [“Catchers and bakers wear them”] MITTS. It quickly became apparent that this was not the case, especially as I filled in FALLING IN LOVE and MORNING PERSON. Once I filled in POP AND LOCK, it all clicked into place.

The upper left corner was very food-filled, and so, naturally, my stomach is growling. Between 1a [“Ewe’s baby”] LAMB, 14a [“___ gobi”] ALOO, 20a [“Passover feast”] SEDER, and 18d [Cook at a cookout”] GRILL, I’m ready for a buffet line of my own. I also really loved the symmetric combo of 10d [“Short fiction books such as ‘Binti’”] NOVELLAS and 37d [“Absurd statements”] NONSENSE, as well as 21a [“‘Yes, I see that’”] SO IT SEEMS and 53a [“City home to Europe’s oldest Chinese community”] LIVERPOOL. The latter of which also provides a really interesting and new way to clue LIVERPOOL. 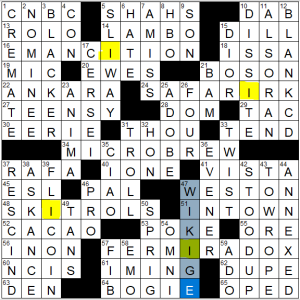 Rebus alert! The central revealer [34a Craft beer … and a hint to the contents of four squares in this puzzle] MICROBREW points us to IPA crammed into a few crossings:

I am a fan of Ross’ puzzles (find more at rosswordpuzzles.com), as many people are, think that his work has really stepped up a notch from an already high bar in the last 8-10 months, and still love this puzzle to bits/think it may be my favorite of his. Even before I move past the theme clues you can see a diversity of knowledge bases, of cluing types, of colorful entries. This is a clean, clean grid considering each corner and the center is constrained by a theme entry. It’s a delight, and I don’t think I need to spell out more examples from the fill to get the point across.

Fantastic menstruation-themed puzzle today, with support for the great work of period.org. 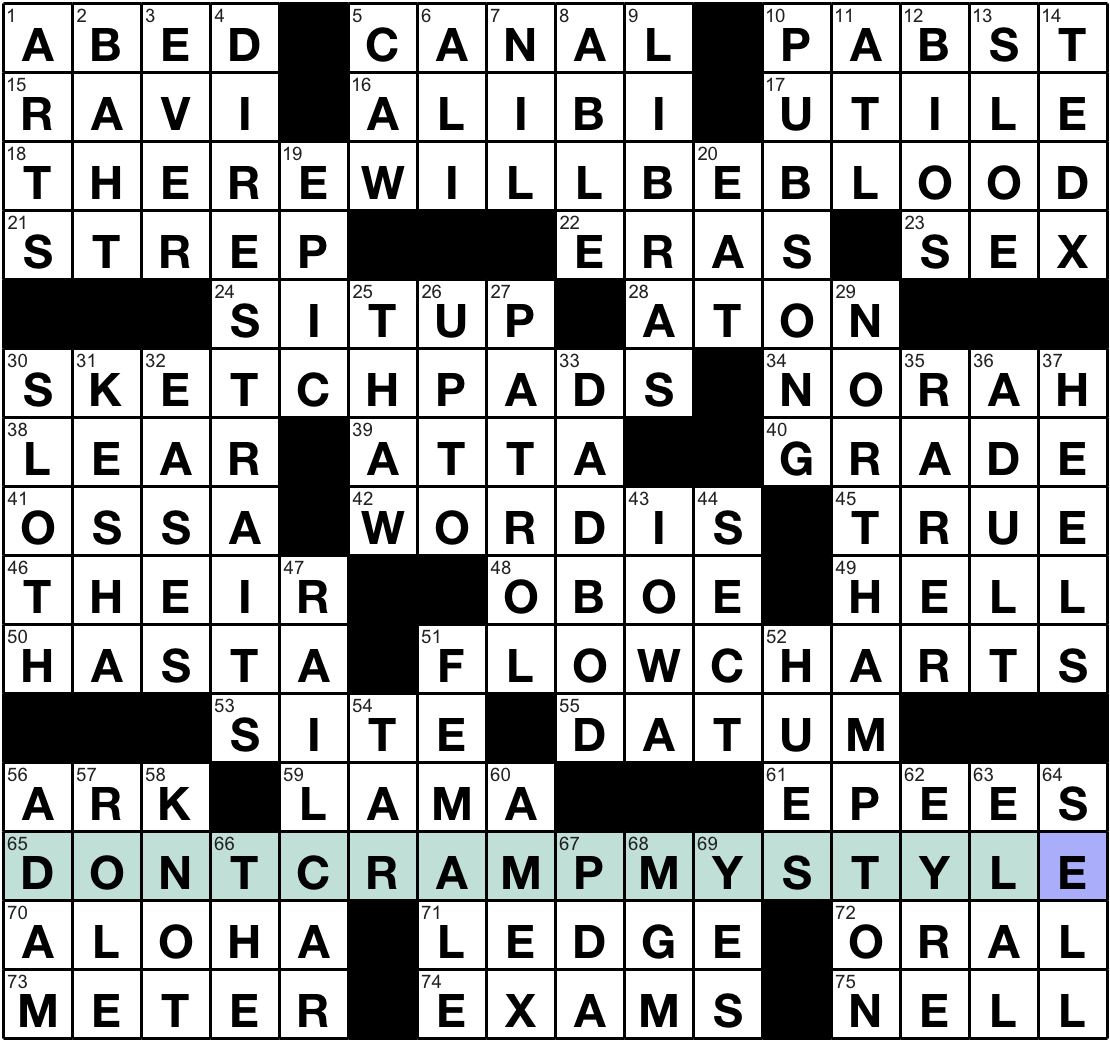 18-Across [Lesson 1: The basics] THERE WILL BE BLOOD

51-Across [Lesson 3: Tools for monitoring and tracking] FLOW CHARTS

65-Across [Lesson 4: Coping with aches and pains] DON’T CRAMP MY STYLE

I really loved the reimagining of the themed entries as period-related and reflects the importance of having an outlet like the Inkubator.

The grid was really smooth with lots of great bonus fill throughout which kept the puzzle entertaining beyond the theme.

I’ll leave you with my favorite period song: