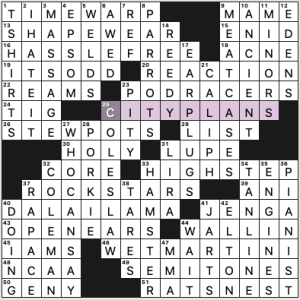 Oops, didn’t have the timer going when I solved this one, but it felt properly Saturdayish. 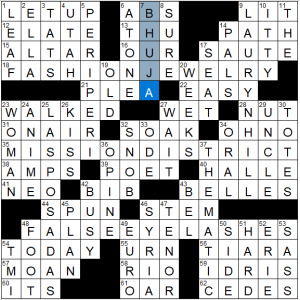 Back later with the recap! 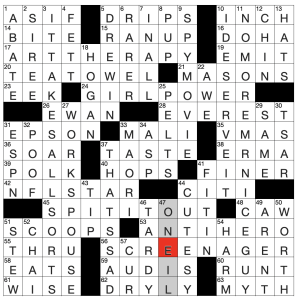 Love the term SCREENAGER, though it’s brand new for me. I wonder how it took me so long to hear it (or even to come up with it myself). It’s a perfect portmanteau!

This one flowed nicely from north to south for me. Pleasantly moderate, as far as Universal‘s freestyle difficulty levels go.

Nice to see two grid-spanners next to two longer entries. I’ve seen NO MORE MR. NICE GUY more than a couple of times in a grid, so that one didn’t play so fresh for me. And IT TAKES ALL SORTS felt somewhat bland. The ALL dupe with IN ALL irked me, which is strange because usually repetition of those smaller words doesn’t. I doubt this would constitute what most would consider an “official” dupe, but it just had that vibe to me when I filled it in. Could be due to finding both of those entries within a few moments.

I liked WORK SPOUSE too, though I have only heard (and used) the term WORK WIFE / WORK HUSBAND.

Right over the plate today! 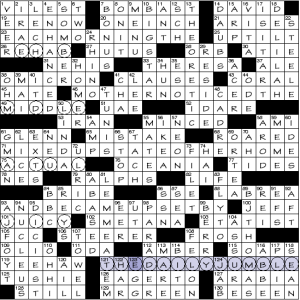 This is a homage to the syndicated newspaper staple, THE DAILY JUMBLE, and it replicates the format. It’s then dressed up a little.

I found the theme to be—as I suppose I do the referenced puzzle—rather tedious, but the rest of the grid was fine and enjoyable.

Sad to report that none of the songs with ‘jumble’ in the title were appealing enough to include as a coda here. 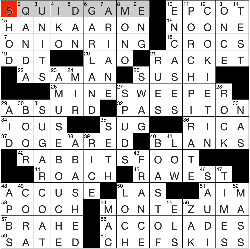 Ooh. I know that 1-Across does not define a puzzle, but it sure does set the tone, and in the case of this puzzle I think it illustrates the danger of seeding a puzzle (or at least putting an entry in a prominent position, even if it wasn’t a seed) around something that’s popular at the time the puzzle was made but hasn’t yet shown that it’ll have legs. It seems like everyone with a Netflix subscription (and plenty who didn’t have one) was watching SQUID GAME last fall, but I haven’t heard a coworker or gym friend talk about the show for at least a few months. (I did not watch it.) And so even though SQUID GAME was released less than 9 months ago, it already feels dated, similar to ZOOM BOMB and ZOOM BOMBING appearing in the NYT in summer 2021 and winter 2022, respectively.

Compare this with PORCH PIRATE at 11D — also a relatively recent coinage that feels fresh in a puzzle but that is also totally here to stay. It’s also clued in a delightful way with [Thief who may set off a glitter bomb package]. 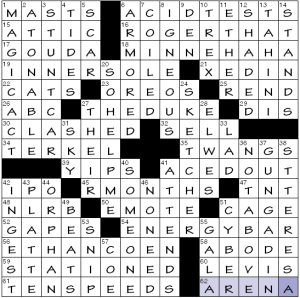 Since I’m an a bit of a hurry this morning, I didn’t have the luxury of lingering over the Stumper to eventually (I hope) break through an impasse in the upper left.

I was able to get the ends of 1 through 3-down—ACT, [I/A]BLE, and CAR—but as these were discrete components, it was difficult to figure out the first parts of those entries. So I looked up 22-across, which I had been thinking was a person: [Olivier Award winner of 1981] CATS.

By no means was it easy to build on event that gain, alas. 1d [Vaudeville staple] was now ––––C ACT and 3d [Certain racer] ––––T CAR. The former was obviously –––IC ACT, but was it COMIC? Anyway, I took a flyer on 19-across [It may be underfoot] being INNER SOLE and so I thought 3-down might be STUNT CAR? Fortunately that was a correct leap, and I learned that 15a [Fan site] also ended in –IC and no longer looked to be a website. ATTIC it was, and then 1-down was MAGIC ACT. GOUDA in the Netherlands at 17a followed, and then the rest filled themselves in. Very tough! 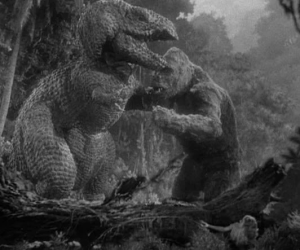 Also had some difficulty in the upper right. Finally getting to a point where I could discern the crossing of 10d [King Kong opponent] and 21a [Marked, in a way] was an X for T REX and XED IN helped polish off that section.