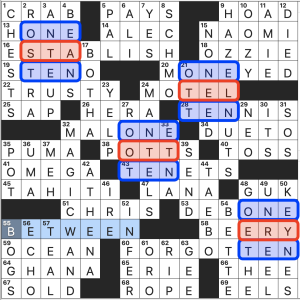 We’re looking for a 12-letter phrase this week. I saw the theme quickly: lots of ONEs and TENs in the grid. I spotted BETWEEN (clued as ‘Word that often follows “Think of a number…”‘) and then… forgot about it for a while. I had four ONEs and four TENs, and thought I needed four more numbers to make twelve. I saw ONE in NONEED, but that was it. I re-scanned the grid, spotted BETWEEN again, and realized that the horizontal ONEs and TENS were parallel with each other, leaving three letters in between.

The sandwiched letters spell STATELOTTERY, our contest solution. Impressive construction by Mike. I suppose you could quibble about the stray down ONE, but the answer is a 100% lock, so… why bother. I ended with Wire‘s Three Girl Rhumba (opening line: Think of a number…) for Matt‘s Elastica-themed May 20th WSJ Meta. Then I solved this meta (think of a number). My wife and I went to the Sagamore Hill last night and they played… Wire’s Three Girl Rhumba (think of a number). First time I’ve heard it in the wild since 1980-something. Here’s the story of Lyndon, Sagamore Hill’s stolen Canada lynx. Happy to report that Lyndon is back.

The universe is clearly telling me to violate my unwritten rule of never ending with the same song twice. Think of a number.