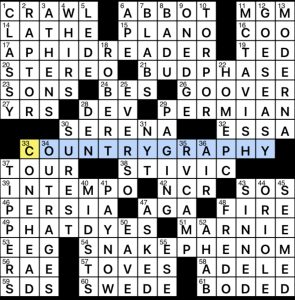 Hello lovelies! This week’s theme becomes clear when we read the title note: “Or is it Stephen?” The theme phrases substitute PH for V. 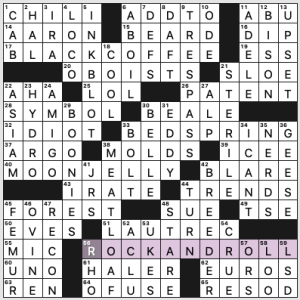 The theme revealer is 56a. [Genre with a Hall of Fame in Cleveland … or what can follow the respective halves of 17-, 33- and 40-Across], ROCK AND ROLL. The themers are meant to consist of one ___ ROCK word followed by a ___ ROLL word:

It’s a solid theme concept, but I’m not sure there are enough broadly familiar phrases or compound words that work with this +rock, +roll framework.

Fave fill: the BOONIES, MEATLOAF. There are also some entries that feel a tad hard for a Tuesday puzzle: SLOE, T.S.E., RESOD, partial AS I AM, LOCO clued via the Latin [___ citato (in the passage quoted)], and ABOIL.

A little bit of trickeration in the title: the last word should be pronounced as if it rhymes with “wears.” The theme answers all end in a word that can also be loosely synonymous with “tears.” 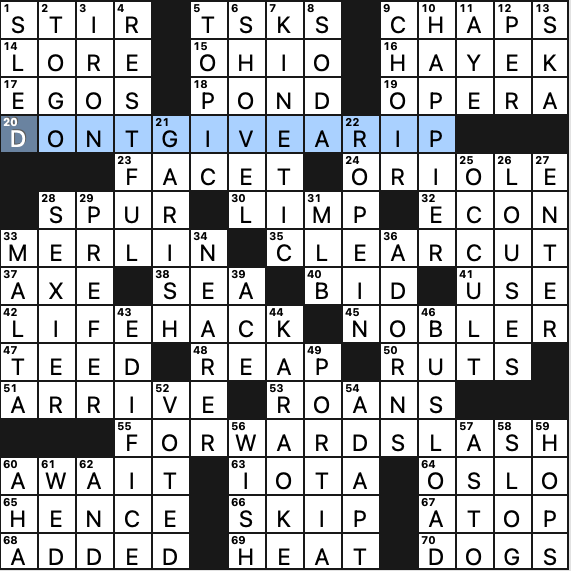 As far as synonym themes go, I liked this one—possibly mostly because of the little bit of wordplay in the title which resulted in a an aha moment. Further, the keywords in question all have significant meaning changes, and the entries themselves are enjoyable.

In the fill, highlights include KINETIC, OCCULT, MERLIN, KARAOKE, PORTIA, EDIFICE, and BUSLOAD. 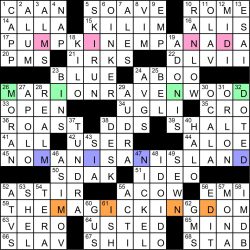 Good day, everybody! I hope you’re all doing great and that you’re getting enough sleep. Flying between San Francisco and Boston at the moment, and the mileage is starting to catch up to these old(er) bones now!

Today’s puzzle is somewhat of a mind-bender, given that each of the four 15-letter answers have four of its boxes circled and, when filled, spell out the word “mind.” MIND also appears in the grid toward the bottom as the reveal (65A: [___ expanding (creating increased awareness…and an alternate puzzle title)]).

First thing I noticed when solving is seeing the entry EMP crossing the letters “emp” in the “pumpkin empanada” entry (9D: [Japanese ruler, for short]). Second thing was immediately thinking about how a pumpkin empanada would taste. Probably wouldn’t be a fan of it. I’ll just stick with chicken empanadas, thank you! Also, seeing the clue to MORAN, mentioning “Bugs” and “gangster” in the clue, took my mind right to the Looney Tunes cartoons of Bugs Bunny outwitting a couple of Prohibition-era mobsters, Rocky and Mugsy (26D: [Bugs the gangster]). 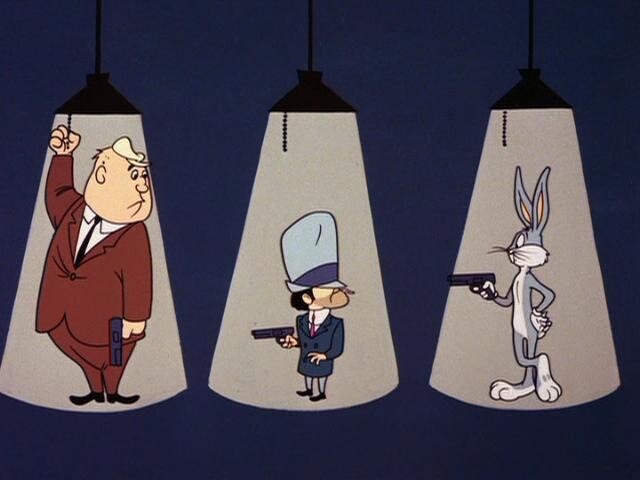 “Sports will make you smarter” moment of the day: NAP (4D: [Short snooze]) – A number of readers know that the Major League Baseball team in Cleveland changed its nickname at the end of last year, and the team is know called the Guardians. There was a time when the Cleveland baseball team was nicknamed the Naps. Whaaaa? They were named as such, from 1903 to 1915, after their player/manager, Napoleon “Nap” Lajoie, who led the American League in batting in 1903. After Lajoie left the team in 1915, the team needed a new name, and that is when the team decided on the racist nickname that many have associated the team with before its change to “Guardians” before this season. 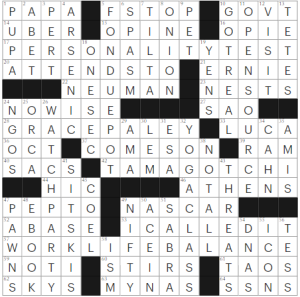 Story of my solve: flew through the top section—including the entire grid-spanning entry from just the first four letters, was a li’l bit spotty in the middle section, slowed down in the bottom third—especially the lower right.

And when the grid was completely filled I was informed that something was off. I’d hoped this might be the entry I was most dissatisfied with, the oddish plural 54d [Genetic molecules] DNAS. Recalling another hiccup, I revisited 31d [That: Sp.], specifically where it crossed 42a [Popular toy of the late nineties] TAMOGOTCHI. See, I’d originally had TAMAGOTCHI but after reading 31-down I changed the A to an O, since the unspecific clue suggested to me the default O ending. Bottom line: that’s a bad crossing and the cluing should have been more explicit for the Spanish word. Or perhaps it should have referenced acclaimed conductor ESA-Pekka Salonen, which would be very New Yorkery.

Theme: Each theme answer ends with a part of the eye 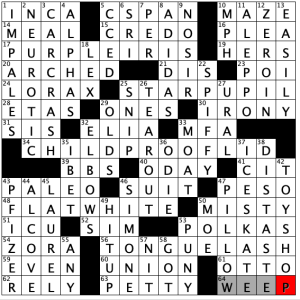 I enjoyed this theme! I was able to figure it out after just the first two theme answers, and while the puzzle was easy enough that I didn’t really need to use it to find the others, I enjoyed having it as confirmation for my answers. I appreciate how the majority of the answers give the eye related word another meaning. I was a little surprised there was no revealer anywhere – maybe just the word “eye” – but honestly I didn’t miss it; the theme is clear enough as is.

I was very impressed with the craft of the grid today. CHILDPROOF LID is 13 letters long and thus requires a black square on either end of it, which automatically breaks the grid up into corners with answers that are 7 letters long. It’s very tempting as a constructor to put a black square in the middle of these answers (here, at the A in IMPALES) to break them up into blocks of 3 to be easier to work with. Today’s puzzle doesn’t do that, and as a result we get a slew of great answers – look at the SE corner! ICE SKATE, DISTASTE, TOY SHOP are all amazing. To have such strong gridwork in a puzzle with 5 theme answers is super impressive to me as a constructor.

Such a fun, clever theme today that’s also jam packed with awesome entries and clues. There’s so much going on in this puzzle, and that’s a good thing! 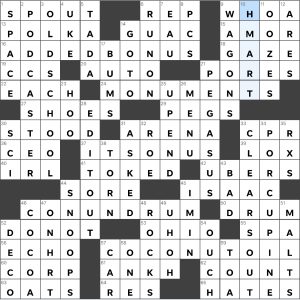 Theme: the word “uno” is spelled backwards (…ONU…) in each themer

Starting off today’s impressive themer set is ADDEDBONUS, which is fitting, given all of the extra fill in the puzzle (more on that below). MONUMENTS took me a few crossings, as I had smaller scale “bust” and “sculptures” in mind, though the cluing should have clicked for a more grandiose nature sooner. Ah, ITSONUS reminds me of group or family outings when someone else graciously picked up the tab. This is the only CONUNDRUM in this grid today—such a well-rounded puzzle indeed. I had the last part of COCONUTOIL but it took me a bit longer to deduce the first part, though looking back it seems so simple now. The title also references the Uno card game which has revesrse cards that I believe changes the order of players—though it’s been too long since I’ve played. It’s a great crossword twist to “reverse” the word by spelling it backwards in the themer set. Well done!

Stumpers: GUAC (had me thinking “dip” at first), SPOUT (shouldn’t have taken me as long as it did but needed a few crossings; “lid” and “strainer” were all I could come up with initially), and POLKA (knowing only his parody songs including The Simpsons ones, just didn’t come up with—and couldn’t believe—it without all the crossings lol) 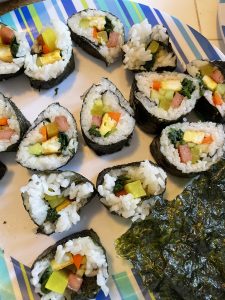 Homemade kimbap, not perfectly rolled like HMart’s but tasty nonetheless

And if that’s not enough, there’s bonus fill galore! Two pairs of 9s in the downs and a set of 7s. How is it possible to fit all that goodness into one grid. Kudos! Can’t wait to solve more from Ada!