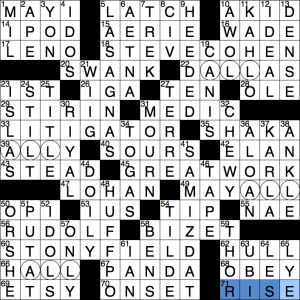 hello and welcome to episode #732 of matt gaffney’s weekly crossword contest, “Time to Get Up”. the instructions for this week 2 puzzle tell us that this week’s contest answer is something people can’t stand having. i have to admit that when i read the clue, i immediately thought of the answer LAPS, since that’s a bit of a chestnut clue. but let us proceed anyway. what are the theme answers? the four long across answers would seem to have nothing in common:

however, the final across clue is explicitly thematic: {“All ___” (legal drama you don’t need to have seen to solve this meta)} RISE. well, that’s good, because i haven’t seen it. (and, it turns out, i had already solved the meta.) does it star aaron judge?

anyway, with this clue in mind, we can see that each of the four long theme answers has the word ALL directly below it in the grid:

usually with a mechanism like this, we’re supposed to look at the letters right above ALL in each case, but those are COH, LIT, ORK, and TON, which are not very promising. it took me a little while to realize that ALL literally needed to rise into the row above it to produce a new answer!

neat! i don’t think i’ve ever seen such a mechanism. the next step was rather more familiar: each of these new answers can also satisfy the clue for one of the entries in the fill:

taking the first letters of those answers indeed gives LAPS, as i had suspected all along.

this was a great mechanism. i kind of wish the instructions hadn’t given the game away, but i enjoyed solving it anyway. let’s hear from the rest of you—surely i wasn’t the only one who thought LAPS had to be the answer right from the start?