Theme: Familiar phrases have a schwa sound added (aptly, given the title) to the ends of their final words, changing that word into something different. 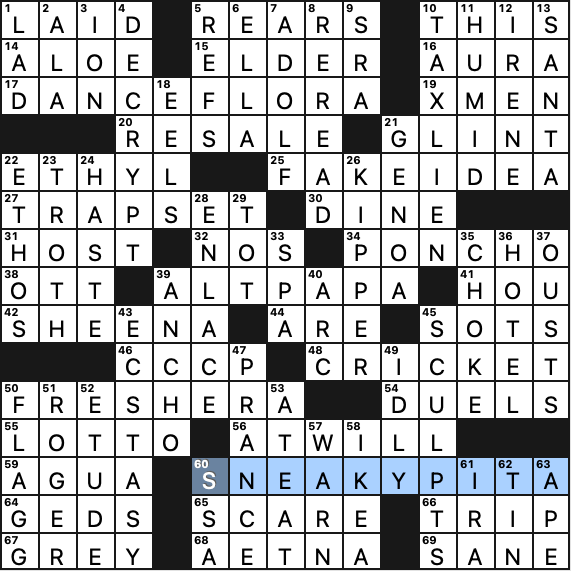 I enjoyed this. It’s consistent, has clever entries, and a touch of humor. Nicely done.

In the fill, I’ll highlight KIPPER, ECSTASY, and CRICKET in lieu of anything especially long and meaty. Two phrases I didn’t know are TAX LIEN [Filing by the IRS] and TRAP SET [Drum kit]. The former is what the IRS puts on you if you don’t pay your taxes. The latter is just a synonymous term for “drum kit.” Apparently “trap” is old slang for “contraption” and referred to cowbells and other percussive doodads the drummer added to the set. 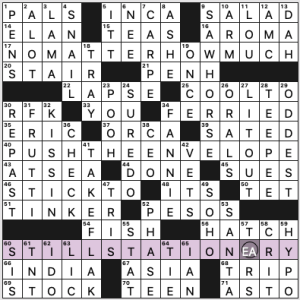 Today’s theme is a blend of quip, rebus, and Schrödinger’s square: NO MATTER HOW MUCH / YOU / PUSH THE ENVELOPE, / IT’S / STILL STATION{E/A}RY. One could argue that if you push a literal envelope, it does move rather than staying STATIONARY, but it does still remain a piece of STATIONERY. Unusual theme, and I’m not sold on STATIONARY making sense here. The crossing clue is 57d. [Rips [five letters]], T{EA}RS.

A number of phrase entries stuck out while I was solving: COOL TO, AT SEA STICK TO, SURE DO, TAKE FLAK, LIT OUT. LIT OUT is the only one of these I actually liked.

Editor: Erik Agard
Theme: Each theme answer is two words, and each begins with TO. 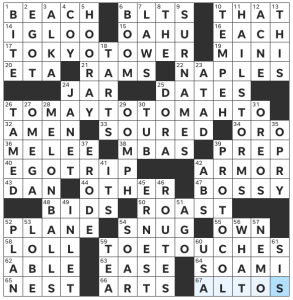 Not much time this morning, so some quick hits on the puzzle: 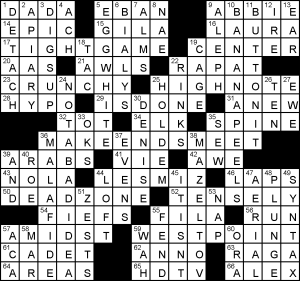 I like Rebecca Goldstein’s spin on the “both parts of phrases go with a word” theme trope more than most. Instead of both parts being added to either the front or the back of the words, the first goes after and the second before, and you have to imagine an “END” in the middle of the phrase. The phrases are much more solid than is usually the case as well. We have:

With the central twelve revealer requiring a sixteen-wide grid, we get two eleven letter downs that are longer than the theme answers, which is why asterisks were used. The idea of BANANAPEELS being “vegan bacon” I gave a lot of side eye to, but its a fun clue nevertheless. Its partner was the more prosaic NOTABADIDEA; which is at least a more believable answer than ISDONE and ITISNT, who are having a rather banal row somewhere.

Most mystifying clue: [Omelet specification], EGGWHITE. The only thing I’ve ever specified with regards to an omelette is what goes in the middle?

Amanda Rafkin and Brooke Husic’s AVCX, “I Woke Up Like This” — Ben’s Review 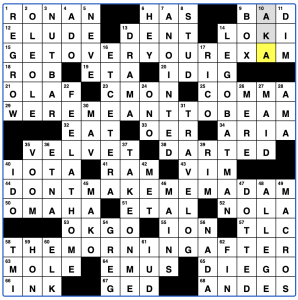 I managed to forget to do the AVCX as soon as it came out, but had a delightful 5-ish minutes cracking what Amanda Rafkin and Brooke Husic cooked up this week:

They’ve placed the morning (“AM”) after the more common phrases GET OVER YOUR EX, WE’RE MEANT TO BE, and DON’T MAKE ME MAD (all of which, come to think of it, could be said during a one-night stand), and wackiness ensues.