This week’s Fireball crossword is a contest puzzle. Check back Sunday after the deadline for more on that.

Theme: FALLING STAR (59a, [Celestial misnomer, and a hint to the circled letters]). The circled letters—angled down and to the right—spell out celestial bodies ALPHA CENTAURI, BETELGEUSE, and SIRIUS. 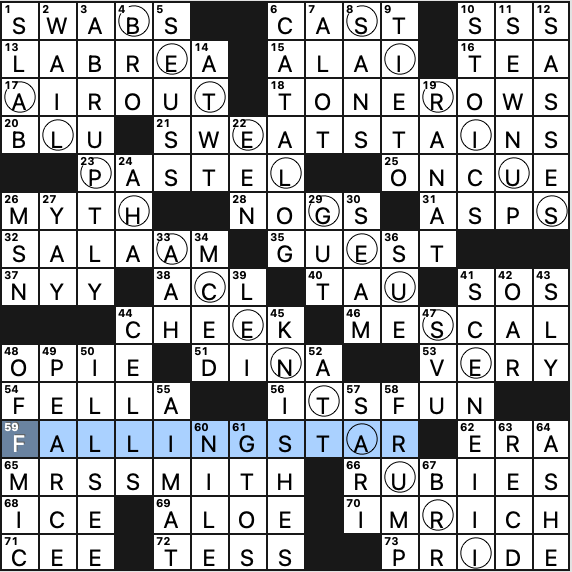 I spotted ALPHA CENTAURI first and was thinking the revealer would be something like DESCENDING STAR. FALLING STAR works but per Google’s Ngram Viewer, it’s much less common than “shooting star.”

I enjoyed sussing out the theme, filling in the star names, and then firming everything up with the revealer.

However, as often happens with grids with triple-checked squares, there are a lot of trade-offs required to make the theme work, and a couple clues felt off to me:

Nice theme, but quite a few distracting negatives. 3.25 stars. 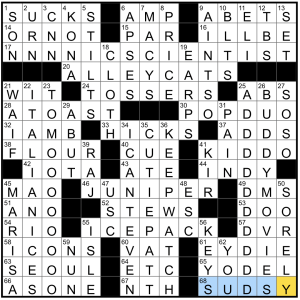 The chaotic visual as I started solving of NNNN appearing as I solved the first section of down clues was DELIGHTFUL.  We’ve got [FOUR Ns]IC SCIENTIST, TOM[EIGHT Os], and A[TEN Ds] in various quadrants of the grid, and goodness but this made me smile as I cracked each one of these.  Whether you thought “SUCKS” (1A, “Good or bad vacuum review?”) OR NOT (14A, “… but it seems like you hate the idea”), I had a great time with this one.

Side note: thank you Parker and Ross for sticking YOU at 62D (“Solver of this puzzle”), so I could remember which particular weird spelling EYDIE Gorme’s name uses. 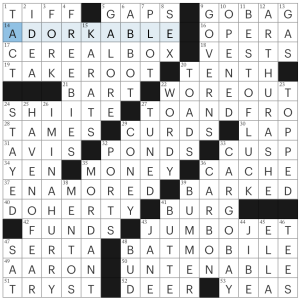 Good morning, folks! Kind of a perfect puzzle from Patrick today, in a “platonic ideal” kind of way. Like, I feel like if I bought a textbook about crosswords it would use this as example in the themeless section. We’ve got the pretty grid design, stacked long answers, conversational stuff like BEST OF LUCK, historical figures like ARTHUR ASHE, quirky slang like ADORKABLE*, question mark clues like [What might still have a little Life left in it?] (for CEREAL BOX). Thanks, Patrick!

*I have talked about ADORKABLE in the past, and it was actually a different New Yorker Patrick Berry puzzle. 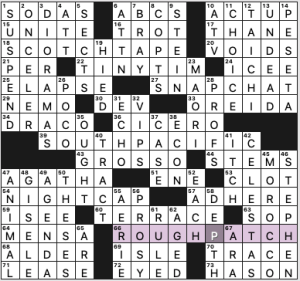 It’s Amy standing in for Gareth today. Our revealer is 66a. [Difficult time, or what is hidden in each of the answers to the starred clues?], ROUGH PATCH, and the starred themers all have the letters in PATCH scrambled up in a row within them: SCOTCH TAPE, SNAPCHAT, SOUTH PACIFIC, and NIGHTCAP.

Surprised by two successive clues: 34a. [Constellation near Ursa Minor] for DRACO instead of a Harry Potter clue, and 36a. [Chicago suburb] for CICERO instead of an ancient orator. Also surprised to see 67d. [Coach Parseghian], ARA—can’t remember the last time I saw him in a crossword (nor the constellation by the same name). Speaking of ARA, the fill had a bit of an “older crossword” vibe, with THANE, ALDER, HIED, COPTS, PROSY, CELESTAS, and PESETA.

Editor: Erik Agard
Theme: Each theme answer is surrounded by the word MAX 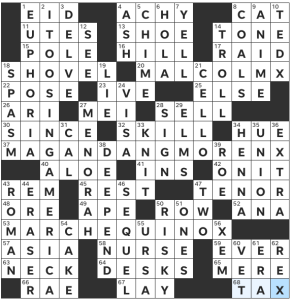 Good execution of a classic USA Today theme! It could have been cool to include other types of limits too, like “min”. Either that or make the title relate more to the concept of maximum?? Whatever, I liked it either way. I’d never heard of MAGANDANG MORENX but am glad to know about it now, and all of the crosses were fair. 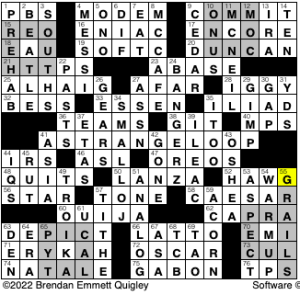 Revealer: 41a [“2022 Best Musical Tony winner, and theme of this puzzle”] A STRANGE LOOP

I was excited to see the shaded squares when I opened the puzzle this morning. Together, this theme feels almost like a piece of performance art and commentary on bullying. Maybe I’m reading too much into it, but I thought it was really interesting. The theme itself wasn’t super useful for me; I honestly didn’t think too much about it during my solve, though doing so definitely would’ve have helped, especially in terms of 70a, but we made it through. It was also nifty that BEQ slipped in 56a [“Jacquel Spivey, in 41-Across, e.g.”] STAR. It would’ve been fun to see EGOT – a crossword fave – sneak in since there’s been so much about Jennifer Hudson getting her EGOT as a result of A STRANGE LOOP, but I still think the inclusion of STAR was more than enough.

THEME: Phrases that are synonyms for “shot” 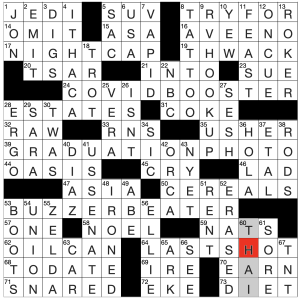 Apologies in advance: My autcorrect changes SHOT to SHIT and it’s very difficult to get it to say the correct word. I actually trained it to do that since I was more tired of it autocorrecting SHIT to SHOT, and if this is the price I pay, so be it. It’s difficult for me to type the word DUCK too.

Anyway, I liked this one! Playful vibe and a steady flow. Is this the first time a reference to COVID has made it into a grid? I haven’t seen one yet. If so, I think that’s a good sign that we’re ready to move on.

Out of everything in the grid, however, THWACK is what won me over the most. That’s a great word. Fun to type. Fun to say. Fun to do with a magazine. You name it. THWACK should be in every grid.

Is it just DIET / COKE that reacts with Mentos? I thought that a lot of sodas could do that. Oddly specific clue imo.

Also really enjoyed the fictional name of a restaurant called THAI‘d You Over.

Only nit is that GRADUATION PHOTO is awfully Green-Paintish.