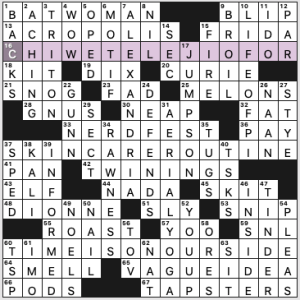 And sometimes Brooke uses a grid with standard rotational crossword symmetry. Felt like a Saturday puzzle, and that’s what we come here for.

Fave fill: BATWOMAN, CHIWETEL EJIOFOR, SKIN CARE ROUTINE, TIME IS ON OUR SIDE, VAGUE IDEA, the Library at ALEXANDRIA, and LIFE OF PI.

Two things I’d not heard of before: 67a. [Barkeeps] being called TAPSTERS (is a hipster vibe required?) and 31d. [Fitness activity done while suspended from a hammock], AERIAL YOGA. We are, however, three short weeks away from the next Aerial Dance Chicago show, “Broken Compass”. My cousin-in-law Chloe Jensen founded the troupe. If you can be in Chicago July 8 or 9, pick up a ticket to the show! And enjoy the video below. 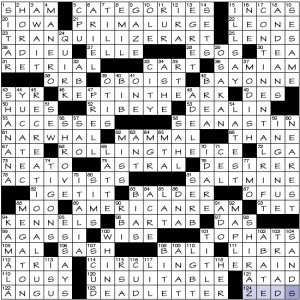 Parse that title as ‘single D out’ and you get the idea. For each of the original multi-word phrases that constitute the theme entries, the final word starts with a D, which has been dropped for whimsical effect.

Note also that the removed letter is the only D in each original phrase. 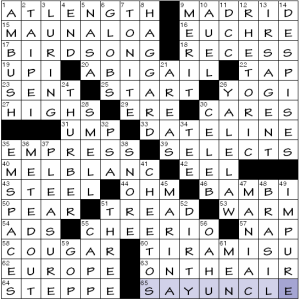 This one’s billed under the banner of ‘less rough’ and boy is it ever. Hardly any devious clues and a highly integrated, flowing grid. I practically flew through this one!

On my initial swing-through, 18-across was the first clue that had an obvious answer: [Break in the proceedings] RECESS. No other gimmes in that area aside from 26a [Toon bruin] YOGI, but because I was considering only STEWS or FRETS for 30a [Worries] I removed YOGI as those letter combinations didn’t look promising.

Animation struck again with 46a [White-tailed toon] BAMBI, and this time I was able to build readily upon that beachhead. 48d [Word on São Paulo stamps] was obviously BRASIL, 53a [Cordial] WARM, 49d [Foul] IMPURE, and so on. Slight hiccup in CRY UNCLE before SAY UNCLE at 65-across. Also, I was glad to have restrained myself at 41-down [Cornmeal product] for it was CHEETOS and not DORITOS as I was suspecting.

From there, I simply journeyed clockwise through the grid, dropping in letters and words with near-abandon. Another small hiccup at 58a CO–––––: [Western predator] was COUGAR not COYOTE.

Probably the toughest clue in the puzzle was 34d [Shape of some office desks] TEE, and that really isn’t so troublesome, is it?

17a [Twitter message] BIRDSONG. 15a [World’s largest volcano by volume] MAUNA LOA. I couldn’t find a shareable version of the title track from Birdsongs of the Mesozoic’s 1995 release Dancing on A’a, so I’ll settle for a callback to today’s Wall Street Journal crossword with 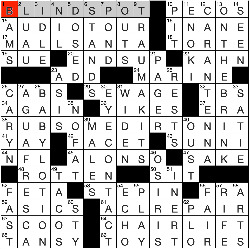 When I see Brad Wilber’s name in a byline, I get excited because I expect that I’m going to have to work for my solve. I’m a little sad that that wasn’t really the case here, although there’s a lot to like in this puzzle. Highlights:

Quibble: Doesn’t the 13D clue [Flirting with] lead to ON THE BRINK OF, not ON THE BRINK, which is what’s in the grid?