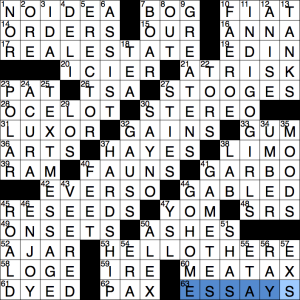 hello and welcome to episode #733 of matt gaffney’s weekly crossword contest, “Couples Only”. the instructions for this week 3 puzzle tell us that this week’s contest answer is something that solving too many contest crosswords might lead to. okay. what are the theme answers? nothing is explicitly marked as such, but there are four long answers arranged in a pinwheel fashion around the grid, so let’s start with those:

what do these have in common? i’ll venture to say: nothing in particular. this definitely seems like one of those metas where you need to find other entries in the grid that connect somehow to these long answers; it’s a 78-word grid, which is a pretty high word count for only 11-11-10-10 themer lengths.

what about the title? the first thing it suggested to me was double letters, but i don’t see anything especially interesting happening with those. the “only” in the title, if it’s intended to be clueful, suggests something a little tighter.

REAL ESTATE and HELLO THERE are made up mostly of letters that appear twice: three E’s, two A’s, two T’s plus one each of L, R, and S in REAL ESTATE, and two H’s, two L’s, three E’s, and one each of O, R, and T in HELLO THERE. but that’s not especially interesting (and it’s also a meta mechanism we’ve seen before).

the next, slightly more sophisticated, idea i had was to combine pairs of fill answers to get all or most of the letters of each themer. for example, all of the letters in MEAT AX are in TEXT MESSAGE except for the second A; is that anything? maybe. STEREO is made up of letters from REAL ESTATE except the O. i sort of doubt this is going anywhere, but let’s see. if this is the mechanism, there ought to be another answer that uses the rest of the letters from REAL ESTATE (ALEAT) or TEXT MESSAGE (ETSSGE). there isn’t, although GAMETES comes somewhat close. does GAMETES + MEAT AX = TEXT MESSAGE do anything for us? hmm, not seeing it. i also note that GAMETES crosses both MEAT AX and HELLO THERE; i very much doubt that all three are thematic, since that would be too much theme to crowd into one section of the grid.

“couples” could be referring to two-word phrases, although that’s pretty weak—but all of the long answers are, in fact, two-word phrases. the shorter ones in the grid are MEAT AX, EVER SO, AT RISK, SAY NO, and GO HOME. that doesn’t seem to be anything.

RAM and BOAR are in the grid, and maybe we’re supposed to find EWE and SOW to make couples of them, but this is contraindicated by the fact that RAM is clued as {Ewe’s mate} but BOAR is just {Wild pig}.

well, i’m stumped. there’s an hour until the deadline, but i am out of ideas. what’d i miss?