The revealer is RAIN OUT (59a, [Ballpark bummer, and a hint to making sense of the starred answers]). The other theme answers are familiar words or phrases that feature the four letters RAIN, but the clues are such that they makes sense only if those letters aren’t there, leaving behind the rest of the letters that spell a different word. 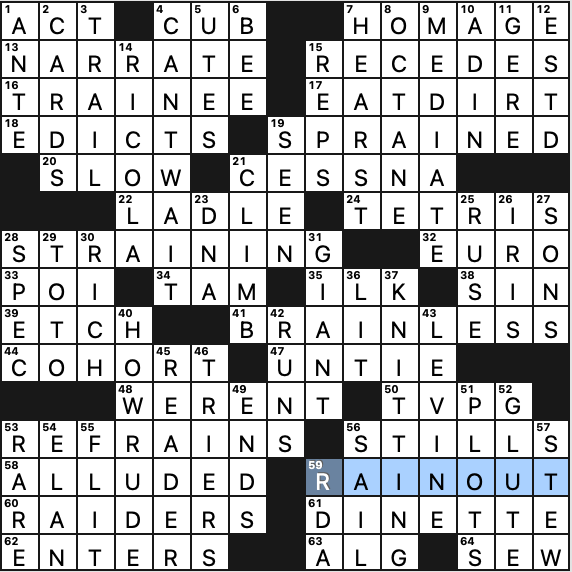 Nothing was working for me at the start, so I ended up getting to the revealer without a clue to the theme. That aha moment was what I needed to go back and finish the job.

A puzzle is more fun for the solver when the theme answers are lively and interesting. STRAINING and REFRAINS aren’t quite that, but there probably aren’t that many potential long entries for this theme. So…a solid theme, maybe not the most thrilling, but solid wordplay.

However, fill like EAT DIRT, “HOW RUDE!,” RICOLA (“Riiicolaaaah!”), and “CAN’T WAIT!” are a lot more fun. I have always liked the word COHORT [Roman legion division] for some reason, going all the way back to my high school Latin class days. 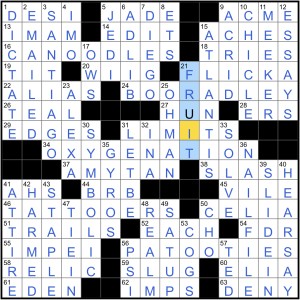 Jeff Chen has a solo grid as today’s NYT, and it’s got a cute little theme:

Each of these clues has an answer that’s undergone OXYGENATION and had an extra oxygen molecule added (oxygen is O2, after all, since it needs two oxygen atoms) to the final entry in the grid — CANDLES, BRADLEY, TATTERS and PATTIES become what we see above

Editor:  Amanda Rafkin
Theme: Each theme answer is a superhero with a color in their name. 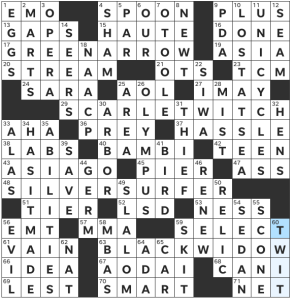 Top TIER puzzle from Amanda today. This is a great set of characters spanning multiple franchises, and I can’t believe how well their names line up. I appreciate the different angles Amanda took in each of her theme clues. Even though all these characters are superheroes (and thus, pretty similar), one is clued by the actress who plays her, one by her secret identity, and two by what they wear. It’s a nice touch that makes a “list” theme puzzle feel fresh as opposed to repetitive during the solve.

I also loved how many other clues in the puzzle were superhero releated! 1d [Easter ___ (hidden bonuses in many superhero movies)] for EGGS, 65d [Batmobile, e.g.] for CAR, 35d [Telekinesis and telepathy, for two] for ABILITIES, and 56d [Like Hela and Thanos] for EVIL. Even 41d [Falcon, e.g.] for BIRD counts because of the Marvel character, right?

Solvers will be indebted to this puzzle.

THEME: The vowels I O U are the only vowels found in common phrases (in that order). 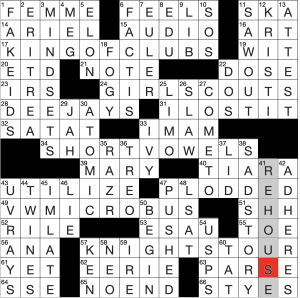 This one got a half smile fro me when I figured out the theme. I was glad to hit the revealer halfway through, but it still wasn’t immediately obvious to me what was meant by it. Shoulda peeped the title. I would’ve gotten it much faster. I like the idea though! Nice that those three vowels are the only ones that appear in each phrase at all.

VW MICROBUS… does anyone call it that? I’ve only heard of it as VW Bus… or the Mystery Machine for all you Scooby Doo fans.

KNIGHT’S TOUR was new to me, but I’m glad to know it.

Only nit… FOGY spelled that way looks totally weird to me. 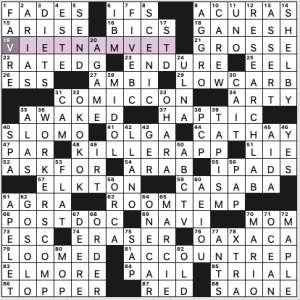 Terrific theme! Familiar phrases ending with a shortened form of a word are reinterpreted as if the second word is short for an entirely different word:

Fave mislead: 76a. [Pacific Coast state] is OAXACA, not OREGON. Not knowing XTRA detergent and not being super familiar with the MARIO franchise, it took a bit of work to unravel the state.

Not so keen on fill like SAONE, ELKTON (a small town in Maryland you’d have no real reason to know if you’re not from around there), red TAPISM (haven’t seen that form before), and APELET (!).

Toughest crossing: 41a. [“___ Dies Dreaming” (2022 debut novel by Xochitl Gonzalez)], OLGA. Hadn’t heard of the book yet. The O crosses a brand name, MIDOL (though I’m glad to see unembarrassed clues for MIDOL and a PAP smear). The L’s in a Spanish word. The G’s in a country abbreviation, and I sure didn’t know where the 2024 European soccer tournament will be (GERmany). The A is in the middle of 33d. [Soccer player Kelley], O’HARA, and if you don’t know the player, well, Kelley can be a first or last name, so you’d better hope you know the word HAPTIC to put this one together. 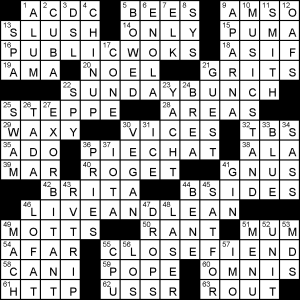 Emma Oxford’s theme concept is quite simple: R is deleted (as explained at 63A, R-OUT) from the second parts of five answers and the results get the “wacky” treatment. I’m sure the possible theme entries here are innumerable; what this does mean is you can (and should) pick some answers with strong imagery, which Ms. Oxford does. I say that not just because 55A is possibly a shout out to a certain blog owner: 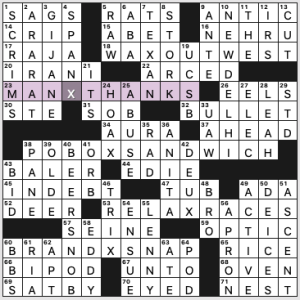 It’s Amy subbing for Darcy this week. Theme answers are formed by changing a Y (“why”) to “be” an X, or “cross,” explaining the title:

Pet peeve: 20a. [Shiraz resident], IRANI. Show me documentation that IRANI is commonly used to refer to Iranians/Persians, vs. an “ethno-religious group of Zoroastrian Iranian ancestry in the Indian subcontinent.”