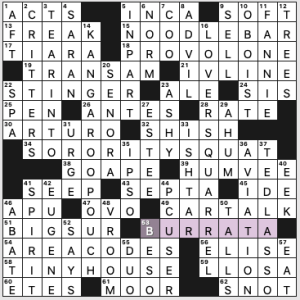 Kind of a toughie for a Friday, no? Your mileage may have varied. I struggled with a few things that were new to me:

Not keen on IDE and AHUM, but the rest of the puzzle’s pretty darn smooth.

Team Steinberg brought us a nifty grid in which every instance of the letter L can be removed while still leaving valid crossword entries in the grid. These entries are annotated with an arrow in the clue indicating what the words become without the Ls.

The central entry serves as a revealer: AXELS (37a, [Skating jumps … or, read as two parts, a theme hint –> Graph lines]). AXELS are skating jumps, but if we take it as two parts, we find the instructions AXE LS (i.e. remove Ls), and finally, when we do that to this word itself, we get AXES, which are graph lines. Quite a lot packed into one short word. 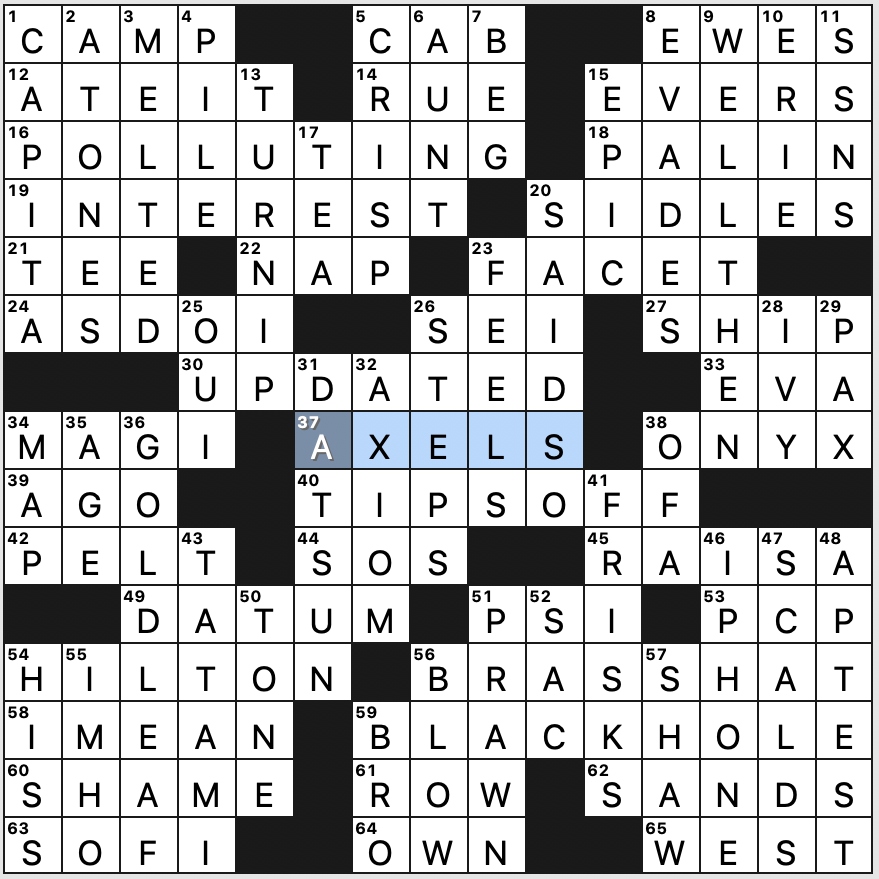 Wow. This must have taken a lot of attention to detail and a long time to put together. Not only do the L words have to still make other words when the Ls are removed, but the crossing words must have Ls in those specific positions which must also be removable. And of course the grid must be fun and smooth and interesting, and this one sure is. The theme is pervasive in every corner of the grid, so there are a lot of constraints here, but overall, it’s an impressively executed theme. Nicely done.

It seems like almost all the long fill is involved with the theme, but there’s INTEREST, TIPS OFF, and BRASS HAT which are not. I’ve heard of “big brass” and “top brass” but not BRASS HAT. One dictionary I found says it’s chiefly a British idiom, another said it’s mostly used in the Army and Navy (not Air Force, which is my background). Whatever its usage, it refers to the fancy hats the bigwigs wear which often have gold braids on them. 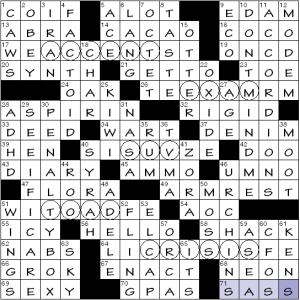 Don’t entirely know what it is, but this crossword never seemed to jibe with me.

Caught onto the theme easily enough, but the relevant entries seemed kind of blah, and one anomalously obscure—at least to what I imagine is an average solver. Worse, that one’s located in a section (left flank to lower left corner) that has cluing—to my sense—notably more oblique and ambiguous than elsewhere in the puzzle.

The result is a schizophrenic solving experience, at least for me.

As for that difficult section I mentioned above, for 39a [Brooding sort] HEN, I went with EMO, which impeded my progress for a long time. Was certain of 47a [Regional plant life] as FLORA, nearly as positive about 55a [Frozen over] as ICY. The tricksy 43a [Locked account] DIARY wasn’t particularly forthcoming. Then, the downs were tricky, as were the trio of three-letter answers at the bottom. 28d [Adult __  ] ADHD seemed as if it could be nearly anything, ditto 29d [“Suit yourself!”] SEE IF I CARE, and the hockey pun of 30d [Shark cage?] PENALTY BOX was mysterious. The aforementioned crosses: 62a [Snatches] NABS, 66a [Grasp] GROK, 69a [Hot] SEXY. Also, I feel that 51d [Boneless appetizer] WINGS should’ve been qualified as a sometimes boneless appetizer.

The rest of the grid? Much easier.

Editor:  Erik Agard
Theme: Each theme answer is a two word phrase in which the first word begins with Q and the second begins with T. 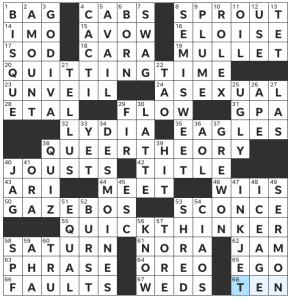 Standout fill: ASEXUAL, SEMISWEET, INKJET, all of the themers! There are a lot of weird letters (Q, J, X, etc) in the puzzle and none of them feel forced.

Standout clues: 61a [One of the White House Trio in “Red, White & Royal Blue”] for NORA, 16a[Kidlit character with a pet turtle named Skipperdee] for ELOISE. At different points in my life, I read both of these books a lot.

Take care of yourselves today, folks. 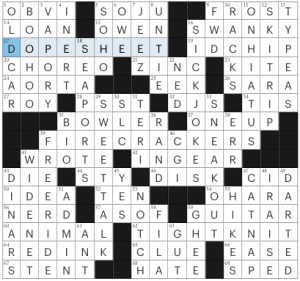 Slang words that mean “great”—dope, fire, tight, sick, and sweet—appear in phrases and compound words with different meanings. Finn clues the phrases as if the slang meaning holds there:

33d. [Pull an Irish goodbye, say], SNEAK OUT. Aka the French exit. Some say the Irish goodbye isn’t sneaking out of a party unannounced but rather, spending a half hour at the door on the way out, enmeshed in conversation and unable to just go. What “Irish goodbye” is not is an ethnic stereotype.