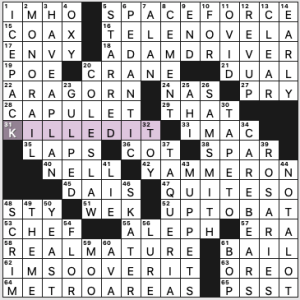 Good flow throughout this 70-worder, hard to get stuck in an area and not find a toehold to make progress. 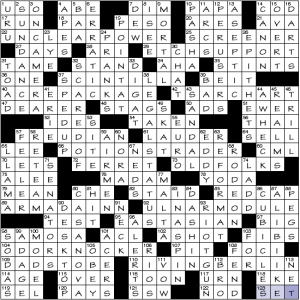 For this outing, the theme answers have had the first two letters of their original phrases transposed.

So these are rather fun and interesting. That’s a ‘yes’ on the theme. 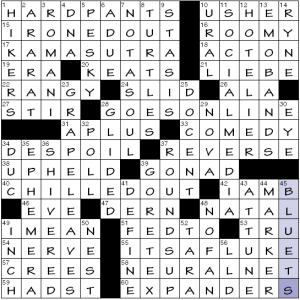 For me, this was firmly on the easier end of the Stumper spectrum. As is often the case, I made landfall in the ‘second’ quadrant, the upper right. (But see 2d [Legendary landfall] ARARAT.)

Knowledge of German strongly suggested that 21a [Ludwig’s love] was going to be LIEBE (fortunately, I dismissed the Beethoven misdirection); this was confirmed by 10d [It adjoins Afghanistan in Risk] URAL (the L was instrumental. Working off the B in LIEBE, 13d Groups inspired by pop-punk] was something-BAND (and I strongly suspected it would be EMO). 26a [Done like] was practically a gimme: À LA, and then 11d [Insta and its ilk] was obviously SOCIAL something (probably MEDIA)…

And before I knew it, that entire section was complete.

Moving around the rest of the grid, there were more than a few impasses, but always there were gettable entries in the vicinity, so I was able to tootle along rather steadily. 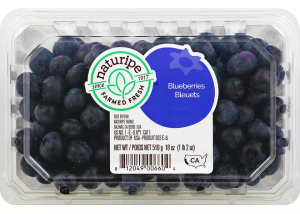 Solid albeit rather unformidable puzzle this week. 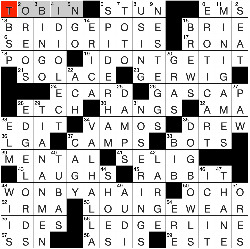 Oof. I was really loving this puzzle, since it was giving me a fight and had entries like SPIDER-HAM, SENIORITIS, BRIDGE POSE, I DON’T GET IT, and some great clues like [Staff addition] for LEDGER LINE (for non-musicians, here’s what they are; for fellow musicians, I bet I’m not the only one who appreciated a pun that requires a bit of musical knowledge to get).

And then I filled in 29D, [Beijing monument whose name translates to “gate of heavenly peace”], TIANANMEN.

It really spoiled the whole puzzle for me. Given recent events in Hong Kong, which reflect a not-so-recent strategy of the Chinese government to erase its actions at Tiananmen Square from the narrative, I just don’t see how you can put it in a crossword, also with a clue that doesn’t acknowledge the horror of what China did to its own citizens in 1989. Not saying I want to stumble on a clue about a government murdering protesters in a crossword puzzle — I’m saying I wish that the editors had sent this puzzle back for the SW corner to be redone, because I just don’t think there’s a way you can clue TIANANMEN that’s both appropriate for the lighthearted experience that a good solve is, and also doesn’t look like it’s glossing over TIANANMEN‘s strongest association.