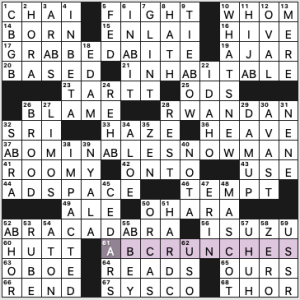 Today’s constructor has a name that’s supervocalic, meaning it contains each vowel exactly once. If the idea of looking for such phrases as you traverse the world appeals to you, check out the Supervocalics Facebook group.

The asterisk in my solving time is because I was beset by hiccups as soon as I started solving. No fair!

This rebus puzzle’s theme revealer is 61a. [Core exercises … or a hint to eight squares in this puzzle], AB CRUNCHES, and {AB} is crunched into a single square twice in each themer:

The fill is quite smooth overall, pitched well for a Wednesday puzzle. Nobody much is clamoring for the Hawaiian NENE to pop up in the puzzle, right? I just went to YouTube to see if they honk like other geese and wow, this is a gorgeous bird!

Theme answers are familiar phrases except the end of each phrase has been turned into a tool which is a homophone of the original word. Each entry is then clued aptly with someone who might use that particular made-up tool. 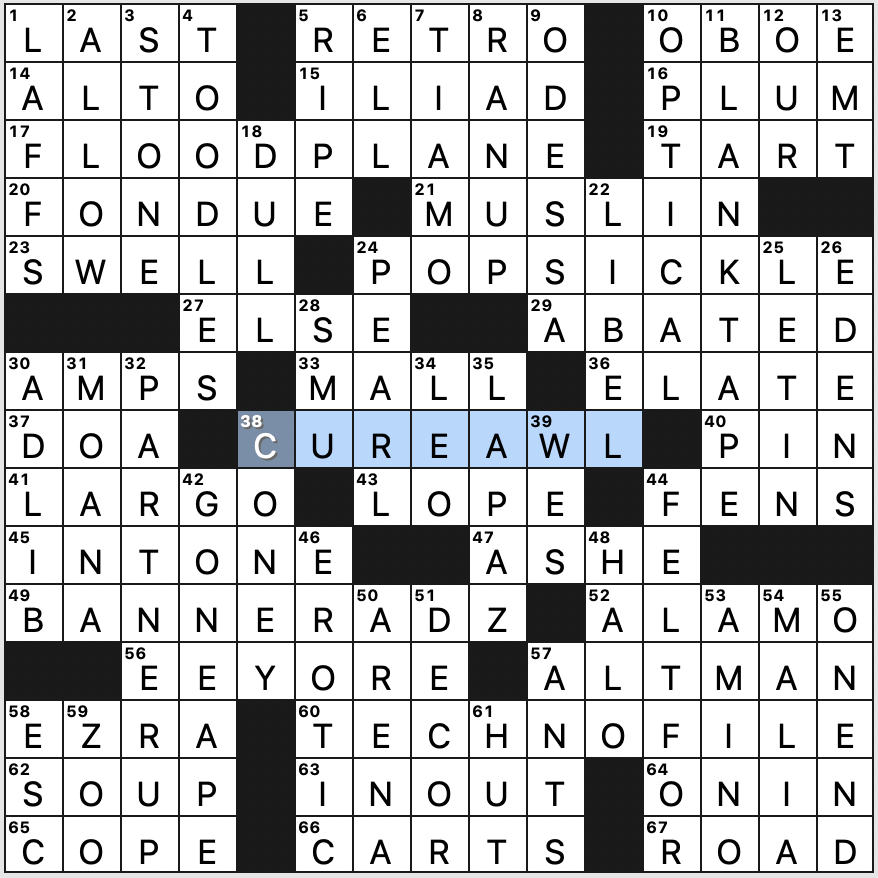 Works for me. Decent wordplay with a little bit of wackiness. Nothing LOL-funny, but a solid—if a little goofy—theme.

BLANK TAPE, PARTNER UP (reminds me of my school days), and  TOODLES top the fill. Everything else should be familiar enough to longtime solvers. 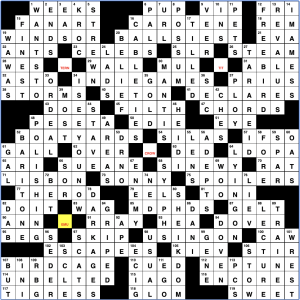 It’s a jumbo 21×21 grid from Will Nediger and Ross Trudeau from the AVCX Classic today.  My PUZ file was missing the shading of the printed version, but 12D clues “Lynyrd Skynyrd classic … or what’s depicted in the lower right of this puzzle”, or a FREE BIRD, in that quadrant, and 107A clues that the “Animal enclosure represented five times in this puzzle’s grid” is a BIRDCAGE, which pointed to something bird-y going on  throughout the grid.  Each “birdcage” square (whether closed off from the rest of the grid, or open, as in the bottom right) contains the name of a bird that affects both the across and down clues that run through it:

and finally, the open cage:

The cluing throughout this one was tricky, so it took a while to fully parse what all was going on here.  This was a delightful puzzle to chew on – thanks, Will and Ross! 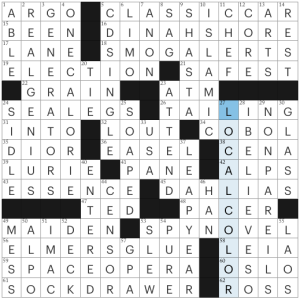 Really a nice puzzle here, with lots of crisp fill: CLASSIC CAR, SEA LEGS, DAHLIAS, SPY NOVEL, ELMER’S GLUE, SOCK DRAWER, REAL GENIUS (could’ve done without the word “real” in the 15a clue for BEEN, which crosses at the REAL), LOCAL COLOR, “I BELIEVE SO,” and NONPAREILS.

This crossword played no tougher than a Tuesday NYT for me. Will the Thursday New Yorker manage to be even easier than that?

Editor:  Erik Agard
Theme: Each theme answer ends with a position for a seat on an airplane. 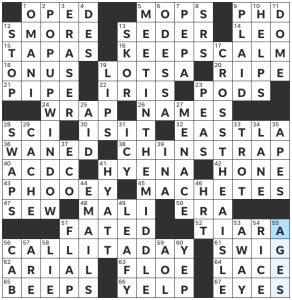 It took me a while to see today’s theme, because the title of the puzzle plus the fact that the theme answers were oriented vertically made me think that the first words (literally, the “highest” in the puzzle) had something to do with chairs! But no, it’s just about airplanes. I like that the MIDDLE answer is literally in the middle of the puzzle; there’s something very satisfying about that. 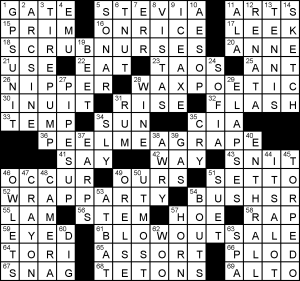 Today’s puzzle by Tracy Gray features a “members of set X” theme; that’s not always the most interesting, but today’s set are SPA treatments, which feels a novel set, at least to me! Also, the choice of entries is unusually splashy, with central [*Indulgent request made by Mae West in “I’m No Angel”], PEELMEAGRAPE and a [*Cast celebration], WRAPPARTY the highlights. These have a PEEL and a WRAP in respectively. The rest of the set are [*Operating room assistants], SCRUBNURSES; [*Employ flowery language], WAXPOETIC; and [*Retail event with deep discounts], BLOWOUTSALES. The treatments are a wax, a scrub and a err… blow? Not sure of that one!