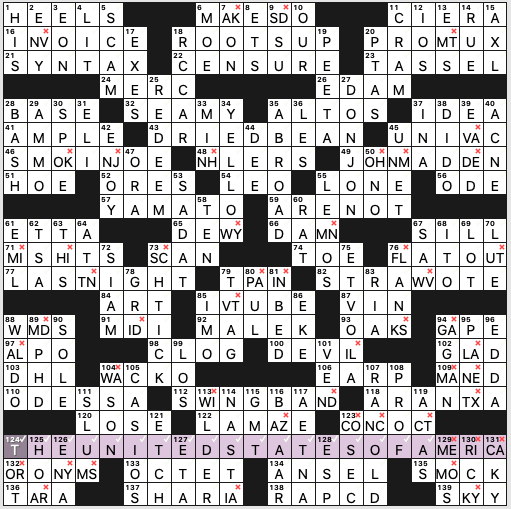 Next Monday is the Fourth of July, and Alex celebrates 124a. [This puzzle’s subject], the UNITED STATES OF AMERICA, with a 50-rebus puzzle. This 21x grid has left/right symmetry, lots of blocks chopping it into small, cut-off sections, and tons of short fill. Compromises must be made to assemble a workable puzzle with 50 rebus squares. All 50 of the 2-letter postal state abbreviations appear in rebus squares, and it’s a neat find that the final 6 letters of AMERICA are a sequence of three such abbrevs, for Maine, Rhode Island, and California. The title, I assume, relates to the states being represented by the stars on the US flag.

Trouble spots for me:

Definitely a tough challenge, even after you’ve figured out that the gimmick is state rebuses. Fifty different letter pairs! Whew. And for the first time, I appreciate Peter Gordon’s practice of coding the correct .puz solution with just one letter in it, because it highlighted (as “wrong”) all my rebus squares. Makes them easier to spot!

It wasn’t particularly fun, but I’ll give this one four stars for the challenge and execution. 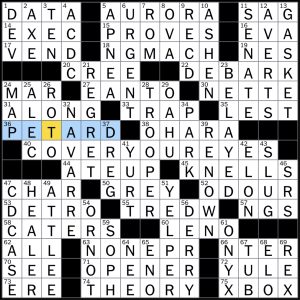 I groaned when I first figured out how the revealer on today’s NYT worked:

“Mechanical” “Snack” “Dispensers” are VENDING MACHINES, where the Is have been covered with black squares.  It’s not three clues, it’s one, and three other spots in the grid do the same thing:

Cute title and a nice revealer today. Q-TIP is at 50a and is clued [Commonly misused toiletry item, and a clue to six answers in this puzzle]. The letter Q appears at either the beginning or end of certain Across entries (at the “tip”) in place of other letters that make the Q sound. 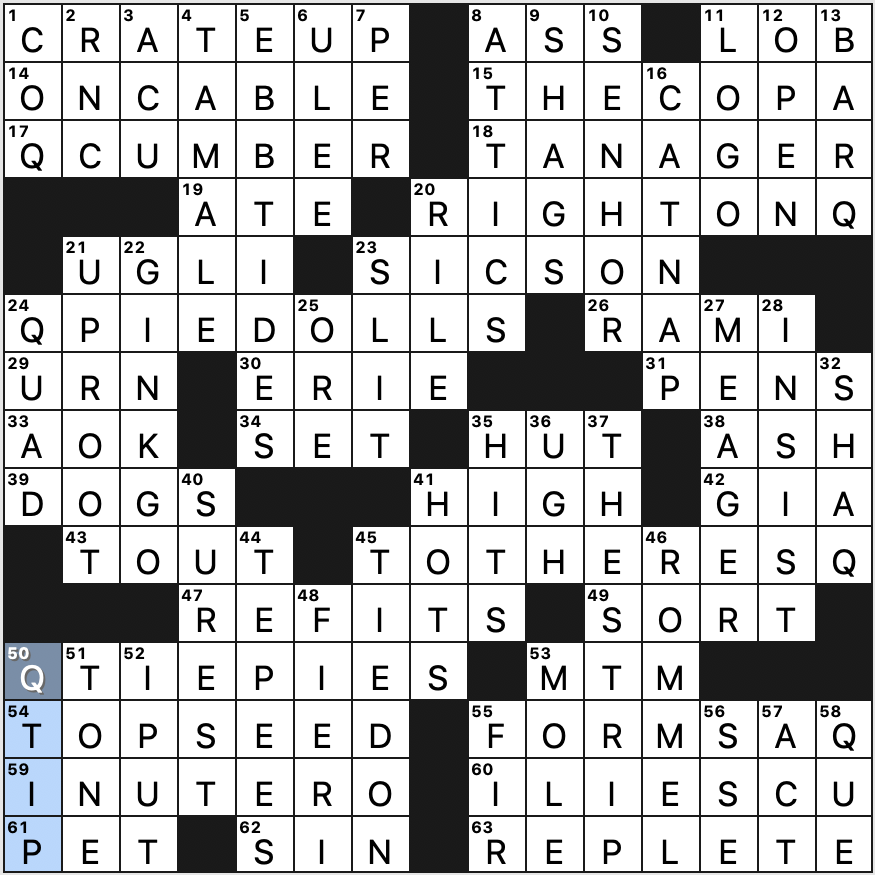 I caught on pretty quickly with the first theme answer, but it was still satisfying to get the full picture from the revealer. The title then added a nice touch once I’d grokked the theme.

I was going to knock ILIESCU for being in the grid because I assumed it ends in a Q sound as well, but online pronunciation videos give it a “coo” sound at the end. Still, it made me pause and double-check those crossings. Ah, but now I see another Q sound at 3d ACU.

I was also not keen about ON CABLE as well as THE appearing in three entries. On the other hand, I liked TANAGER, GINKGO (even though I always mess up the K and the G), and TOP SEED.

I’m going to forgo my usual “Clues of note” section today as I have some birthday doings to attend to (my wife’s no less). Please share if there were any particular clues you want to call out.

Editor:  Erik Agard
Theme: Each vertical theme answer contains the word TUNE. Furthermore, each of those TUNEs is sitting atop a type of bag – something you can literally carry things in. 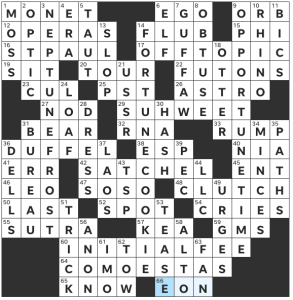 And the other part of the theme…

As I was solving I noticed the “tunes” in each of the down answers, and I thought “ok, that’s the theme… a little weak, but not bad”. I also noticed the repeated “carrying” related clues, but because I jump all over the place when I solve quickly, I didn’t realize that they stretched across the whole grid, or that they were anything more than a classic “repeated clue” gimmick. It wasn’t until I finished the puzzle that I put both of these pieces together and understood all the layers of the theme. I wonder how many casual solvers will fully notice the “carrying” aspect? It’s neat, but you almost have to be looking for it. I’ve never heard of NEPTUNE FROST, but it sounds wild and I’m very intrigued now.

I’m not always a fan of asymmetric puzzles, but I love how extreme this one goes in its asymmetry. Look at those black square shapes in the bottom half of the puzzle! There are some nice longer answers afforded by this puzzle’s unusual grid, including OFF TOPIC and COMO ESTAS. My two worst moments were putting in “duvets” for 22a[Bedding options] FUTONS (side note that I don’t love this clue; “bedding” to me refers to sheets/things put on the bed, not the bed itself), and constantly misspelling BUREAU. Oh, and I also spelled SUHWEET as “sahweet”; I’ll blame the rapper Saweetie for that one. 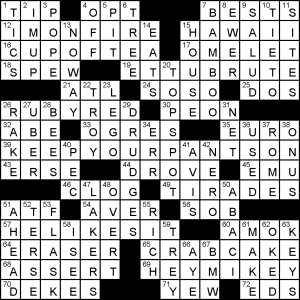 Dave Taber & Laura Moll’s puzzle today is a clue snowclone puzzle, where each clue is [x-line] and the answer is a spoken phrase, either general or specific, connected to X. The puzzle is cleanly executed, which is often a sticking point for these snowclone puzzles. Inevitably one or two clues feel forced, but nothing seemed too stretchy. We have: 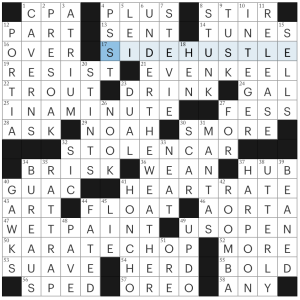 Breezy lil Thursday from Caitlin! It seemed like this puzzle had fewer long answers than a typical themeless, but I didn’t check that at all. I loved SIDE HUSTLE (what’s yours? Mine is making crossword puzzles!) and KARATE CHOP, and the clue for STOLEN CAR was great– Hot wheels? The spanner wasn’t particularly fresh or evocative though. Have a great long weekend everyone!

Theme: Each theme answer is clued with a three letter acronym within a longer clue that stands for the three words of the answer. Additionally, as seen in the clues, each acronym is a common descriptor for a “head.” 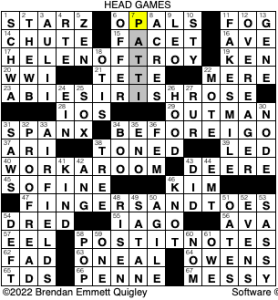 I don’t know how it’s possible that BEQ thought three each of these. It’s such a great combination of answer lengths and acronyms in the puzzle. HOT head for HELEN OF TROY, AIR heads for ABIE’S IRISH ROSE, and PIN heads feel a little bit like insults? Overall, though, a well-crafted theme.

My favourite clue was undoubtedly 32d [“Check to see if a slip is showing”] for PROOFREAD. I’m amazed that this grid is symmetrical, and so it was nice to see PROOFREAD by AIRFIELD and reflected by FAKE SMILE and OVEREAGER in the opposite portion of the puzzle. Also, loved the inclusion of AULI’I 3d [“Cravalho who voiced Moana”] and PATTI 7d [“Smith who is the Godmother of Punk”].