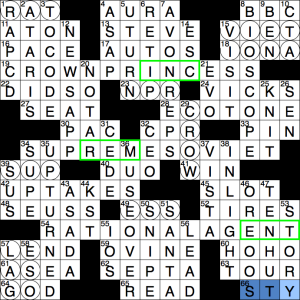 hello and welcome to episode #735 of matt gaffney’s weekly crossword contest, “Bit by Bit”. we’re into guest constructor month at mgwcc, and this week’s puzzle is by richard d. allen. i attempted richard’s puzzle without the instructions, and i eventually succeeded. what are the theme answers? the three long across answers all had starred clues:

what do these answers have in common? nothing. it really took me a while to wrap my head around that, since i was expecting the theme answers to tell me something in a week 1 puzzle. but no, they’re just there. i mean, they’re all two-word phrases, and CROWN and SUPREME are somewhat synonymous with “head”, and RATIONAL is at least related to head, but no, ultimately there is no semantic or lexical connection between the themers.

so how does the meta work? i had to reconsider the title, and also look at the grid. there are a very large number of black squares in the grid (48, about 10 more than the max you’d normally see in a 15×15 grid), and only three overt themers. so i figured there had to be a lot more theme entries hidden in the fill. eventually it occurred to me that “bit by bit” might mean we’re reconstructing the three theme answers piecemeal, as charades of fill entries. and that’s exactly what’s going on:

the unpaired trigrams combine in yet another charade to spell the nine-letter word INCREMENT, which is a fitting answer for a puzzle with this title and mechanism.

i enjoyed this puzzle. but it definitely felt on the harder side for a week 1 (maybe a week 2), and i think it might have been more interesting or elegant if somehow the three long theme answers had some semantic connection to the theme mechanism. as it was, i was left wondering why these three answers were chosen from among the vast universe of 13(ish)-letter strings that could be broken down into three- and four-letter charades.

the fill had a surprisingly large number of video game references: {Annual fighting games esports tourney, for short} EVO (which i wasn’t familiar with), {“___-Man Fever” (hit song based on a video game)} PAC, {2600 game systems, e.g.} ATARIS, and {Not entirely trustworthy, in “Among Us” slang} SUS. i suppose the latter has come into broader use among non-gamers. elsewhere i thought UPTAKES, IN LIGHT, and K ST were a bit awkward, the former also crossing the similar UPTURNED which in TURN partly dupes U-TURN. and {Early motion-picture projector} BIOSCOPE was new to me.

This entry was posted in Contests and tagged Richard D. Allen. Bookmark the permalink.