Theme: Those old familiar shampoo bottle instructions: Lather, Rinse, REPEAT (71a, [Final instruction on a bottle, as demonstrated by the circled letters]). 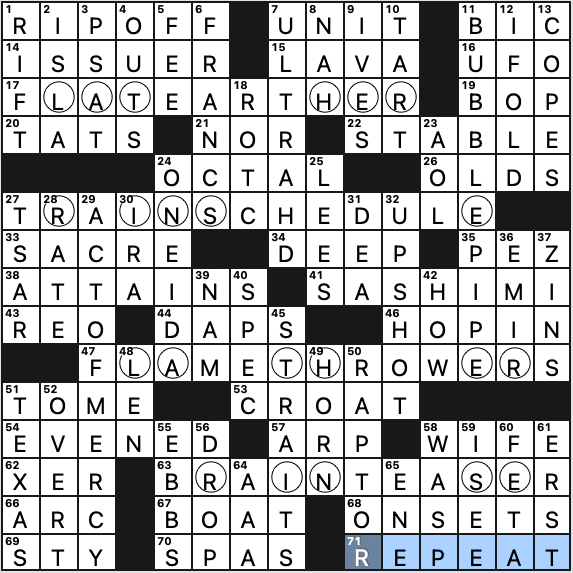 When I got to the third entry, I was looking for REPEAT, so I had to do a double-take when I saw we were literally repeating LATHER and RINSE. I enjoyed that little switcheroo. Nice choice of theme entries as well.

The only thing I was wondering is why this theme was implemented with circled letters, but maybe they’re meant to represent soap bubbles. Sure, let’s go with that.

And oh, there are more bubbles at 11d BUBBLE PIPE which is a super fun entry. Its opposite number ACT OF MERCY is nice as well as is SASHIMI, RIPOFF, and ULTRA HD. 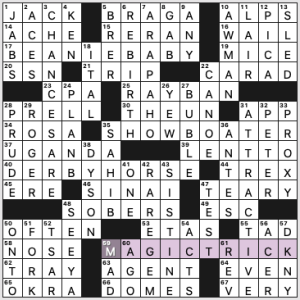 Kind of a complex theme for a Wednesday puzzle. The revealer is 59a. [Pulling a rabbit out of a hat, e.g. … which happens three times in this puzzle], MAGIC TRICK, and three themers include (in other contexts) types of hat. Three fictional rabbits’ names intersect those hats: 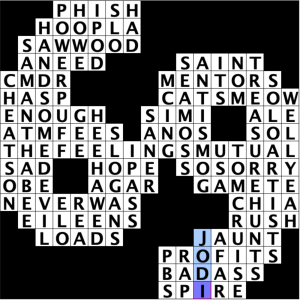 Today’s AVCX was a treat – a diagramless!  These feel tricky to blog about, since there’s generally something going on with the shape of the grid rather than anything deep in the clues (though that’s possible!)

This collab from Alex Eaton-Salners and Francis Heaney was delightful right from the start, though I should have had a hunch from the title what was meant by “A Nice Diagramless”.

The grid is in the shape of the number sixty-nine.  If you need me to explain further the connection between this and 29A, please just go look up 69 in urbandictionary.  The correct response to this grid is “nice”, if you need to understand why, it’s probably also over at urbandictionary, it’s a meme to the Sex Number.  I screeched once I realized what the grid shape was while I was working on assembling this in Crossfire to ensure I had crossword symmetry as I mapped things out, and that was delightful, thank you Alex and Francis.

Round of applause for the clue at 27A, “Cien ___ de soledad” (“One Hundred Buttholes of Solitude”), for correctly translating what’s put in the grid. 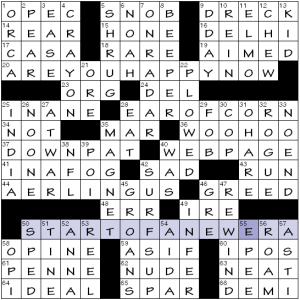 Fine but no wow.

All right, just some padding text here to balance out the Daffy image, right?

And there we are. 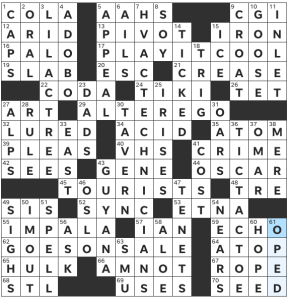 Very classic USA Today theme type here, and it’s done pretty well. It’s a nice touch that the ACT is split across two different words in each answer. I didn’t know the LILAC TREE song at all, but Google tells me the song “Lilac Wine” has been sung by a ton of people including Eartha Kitt, Nina Simone, and Jeff Buckley. HVAC TECHNICIANS is probably the weakest answer in the bunch, since for a grid spanning answer it’s just not that interesting. It does have a weird mix of letters in it though, so that was fun to uncover.

Since I started in on the puzzle with the across answers, I got to the clue for 17a [Act casually] and, having noticed the title of the puzzle, wondered if I had to drop the “act” from the clue. I hadn’t seen that type of theme before at USA Today, so I was excited for a second for something new, but nope. This was still a solid puzzle though! 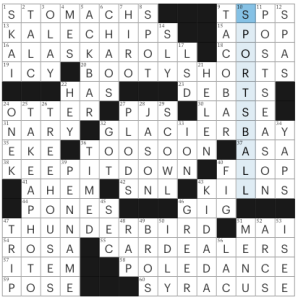 Solvers who are extremely online (as they say) and perhaps not male may have an advantage in solving this puzzle. HEY! That’s me.

Content that fits that vibe includes BOOTY SHORTS, “Thanks, it HAS pockets!”, POLE DANCE (informative clue: [Performance that may include fireman spins and outside-leg hangs]), SPORTSBALL, and KIDADA Jones (she’s Rashida Jones’s big sister, one of Quincy Jones and Peggy Lipton’s kids). These feel like the sort of answers that make less-online straight guys grumble, but I like them. 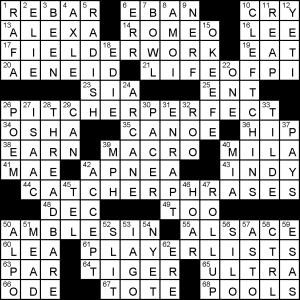 Today’s puzzle by Kent Smith has two levels. You add ER to the first part of regular two-part phrases making new ones. Each of the first three words; FIELDER, PITCHER, CATCHER; makes a type of baseball PLAYER the fourth word of the theme…

All in all a fairly uneventful grid. There were a lot of short names, but none really caused any trip ups, at least here. By far the splashiest answer was [Yann Martel novel adapted into an Oscar-winning film], LIFEOFPI, which looks really neat in the completed grid… Also timely is [Nickname for tennis’s Nadal], RAFA; who dragged himself through a marathon match today against Taylor Fritz.