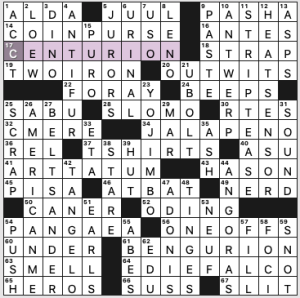 We have a mini-theme of sorts, with CENTURION and BEN-GURION differing in just two letters and paired up in the grid.

Notable bits: JUUL is back on the shelves pending an appeal to the FDA’s recent ban. (Did you know that many vaping companies are owned by tobacco companies? They’re just in the business of fostering nicotine addiction by hook or by crook.) 14a. [Change location], COIN PURSE—I like the “the answer is a verb” ruse. JALAPEÑO, ART TATUM, ONE-OFFS, EDIE FALCO, STRIPTEASE with a Razzie Award clue.

6d. [Number one spot?], URINAL. I learned from the delightful British reality competition show, Great Pottery Throw Down, that across the pond they pronounce it more like yer-EYE-nul rather than YOU’RE-in-ull. Three seasons of Throw Down are on HBO Max—check it out!

I assume that a word like NERD has been used in cryptic crossword clues for the Belgian city ANTWERP, with its embedded TWERP.

The theme consists of common words that have been split into two separate words and clued in wacky crossword fashion. As I was going through the solve, I wanted something else to tie them together. The revealer at 60a indicates what that connection is. We’ll talk about that in a minute. First, let’s look at the theme entries. 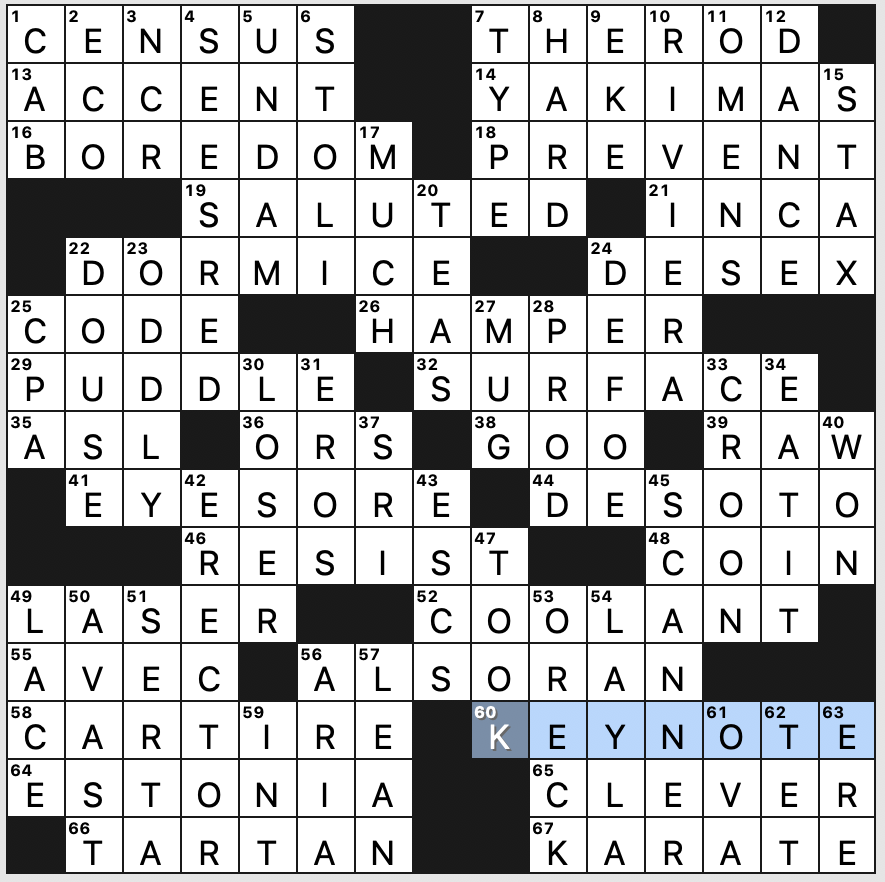 What’s the connection? The revealer is KEYNOTE [A different one “unlocks” seven answers in this puzzle]), but that still didn’t make it clear enough for me. A glance at the title confirmed my suspicion that the gimmick relies on musical notes. Finally, going back to the theme answers, I noticed that each split occurs at the letters in each note: DO in BORED OM, RE in PR EVENT, etc. I guess the idea is that each note is a “key” that “opens” that word up.

Was it worth all that mental gymnastics to fully grok the theme? I didn’t feel it was. I don’t mind the wordplay (when it’s not awkward), but I’m not sold on the KEYNOTE idea as a basis for splitting words apart. Mostly I was left, not with an aha, but more of a “why?”.

For a grid with short theme answers, you’d hope for some juicy long fill. But there’s not much to speak of. I like RIVIERA, ALSO-RAN, and KARATE.

But I must note that the [Washington tribe, historically] is usually referred to as the Yakama, not YAKIMAS. ESCS is terrible fill, and there seems to be a heavy reliance on the old crosswordesey standbys, especially in the short entries: ECO, NCR, EKE, OVA, TET, ERE, INT, ORS.

While I wanted some reasoning behind the theme, it felt overly convoluted. And there wasn’t much in the fill to add sparkle to the grid. 2.75 stars.

Today’s puzzle is a debut from Philip Wolfe – congrats, Philip!  No, you’re not seeing seeing, but you may want to think think on what’s going on it today’s grid:

the TWICE/DOUBLE/TWO of each of these phrases has been made literal – we’ve got YOU ONLY LIVE [TWICE], [DOUBLE] BLIND STUDY, and GOODY [TWO] SHOES in the mix here.

Looks like a debut today! Congrats to you, Chloe :)

THEME: Common phrases that can be made up entirely of “music notes” (letters A-G) 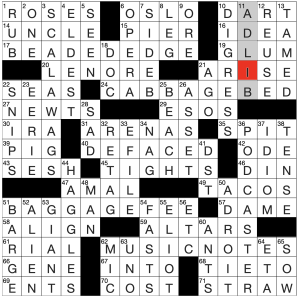 I liked this one and enjoyed the solve, despite not really caring about the theme all that much. I did enjoy the tension that was built as I solved from north to south trying to figure out what the starred themers had in common. I mean, CABBAGE and BAGGAGE look like they have something in common… but what? That tension was broken with a mere shoulder shrug once MUSIC NOTES gave up the goose. This theme idea kinda sorta falls into the category of “stunt puzzle” for me, very reminiscent of many a Bruce Haight construction. A lot of solvers wince at these types (Bruce himself calls them “Haighters”) since they can be so constrictive; I mean, the themers in this one aren’t overly familiar to me… needed nearly every cross for BEADED EDGE. But I don’t mind a theme like this here and there.

I think my favorite entry was SCALAWAG, despite being 100% positive that the second A should be an I. Had to comb the grid at the end of the puzzle to find my typo once Mr. Happy Pencil failed to appear. Also like the fresh SESH and PODCASTER.

Thanks for this one, Chloe. Looking forward to your byline again.

Hey folks! I absolutely sailed through this one– I can’t remember ever cracking four minutes on a New Yorker puzzle before. When there’s a central stack like this, I like for two of the three answers to be zesty and fun– in this case, LINE IN THE SAND and RETAIL THERAPY (with a stellar clue, [Attempt to buy happiness?]). BANK STATEMENT was pretty meh, especially since it couldn’t get a mis-direct-y clue. 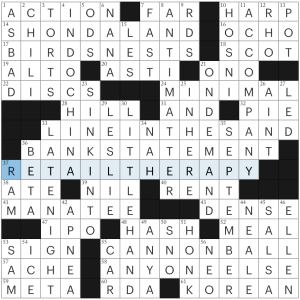 Things I liked seeing: SHONDALAND (esp calling out “Bridgerton”), CANNONBALL ([Announcement before making a big splash?]), ANTIMATTER, bulgogi + kimchi (cluing KOREAN), ANYA Taylor-Joy. I don’t like the “crossword grammar” of using “as” in a clue, but [Fail to get support from, as a beanbag chair] for SINK INTO was a lovely image. 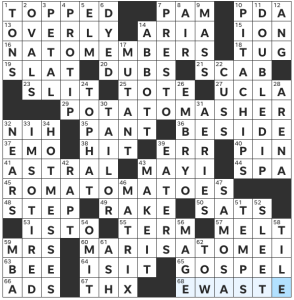 I think this is the third USA Today puzzle in a row that I’ve written about that has a hidden word theme? To be fair, I don’t always write on consecutive days, but it seems like this is an especially common type recently. That being said, I liked this puzzle a lot! All of the answers are solid, and I like how ATOM is split across the two words in each of the phrases. One thing that was kind of funny for me was that I originally started ROMA TOMATOES with the word “tomato”, but once I figured out that it was wrong I only had to change the first letter to get the right answer! Also, I watched “Fire Island” last weekend, which contains a top-tier MARISA TOMEI joke, so now that’s all I think about when I see her name.

Theme: Each theme answer replaces a long “A” sound with a long “E” and, in some cases, rearranges where the E typically is. 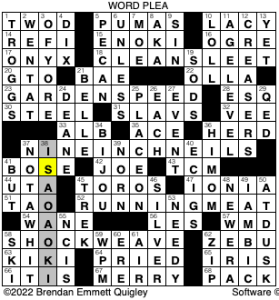 Thanks to Cynthia who pointed out the long A to long E vowel change. I thought that the changes resulted in tough but fair themers. My favourite was definitely RUNNING MEAT.

On the fill that I’m more confident on:

That’s all from me for now! 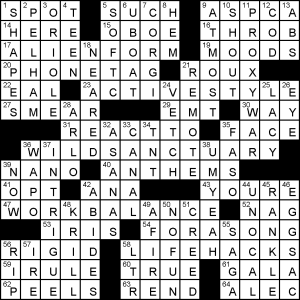 Today’s puzzle by Laura Dershewitz & Katherine Baicker won me over with the revealing entry, LIFEHACKS, which was both a fun answer and an apt and vivid explanation of the theme. I had already figured out that LIFE disappears from several phrases, creating new “wacky-style” ones by that stage. Taking a word rather than letters from entries tends to make the new phrases more grammatically forced, and so this proved, but the concept more than makes up for that:

[Mobile game?], PHONETAG is not thematic, but is probably why the authors and editor chose to use asterisks. Of course, I just saw the “?” and didn’t really pay closer attention, so for a good while I considered as possibly thematic. It’s a fun clue, though!

As usual in the PV era, there are a lot of recent-ish clues I have no idea about, but end up being plausible answers. So: