There’s a hint about the theme at 1a and then a revealer at 67a. I thoroughly enjoyed this puzzle and one of the reasons will become evident shortly. 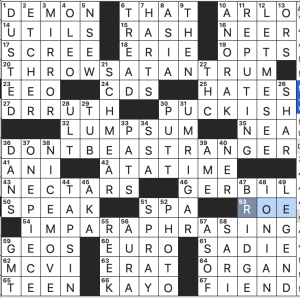 1a is [Shapeshifting spirit haunting this puzzle in various forms] and the answer is DEMON. Sure enough, there’s something wicked in each of the three three answers.

SATAN, BEAST, IMP are all devilish. And then there’s the revealer at 67a [Popular puzzle blog Diary of a Crossword _____… and a hint to something hiding between the words in 20-, 36-, and 54-Across] is, of course, FIEND. Loved the shoutout! Even without my (understandable) bias, it’s a nice solid theme that I haven’t seen done before, or at least not in a while. And I enjoy the conversational-style clues at 36a and 54a.

What I didn’t know before I did this puzzle: never heard of Thrity UMRIGAR. Also did not know that SARI comes from the Sanskrit word for “garment.”

And finally, let’s lift up the clue for 53a [Supreme Court decision overturned on June 24, 2022, familiarly. Are you as angry as we are? Donate at abortionfunds.org]. The answer, of course, is ROE. Donate. March. Speak up. VOTE. 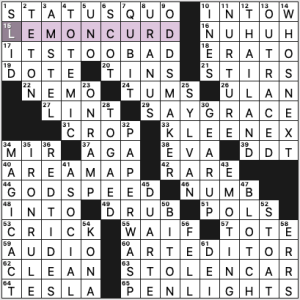 This puzzle kicked my butt like a harder Saturday NYT, and yet it’s a mere Friday puzzle! Just me?

It didn’t help that I was bitten by two entries I’d never seen before (and a third familiar name, but with an unreachable clue for me): 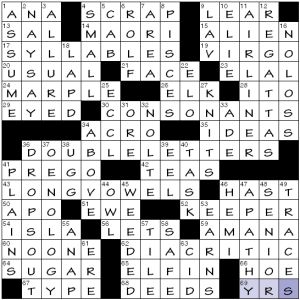 Well this is an innovative little theme! A combination of a few things often seen in crosswords, but generally not together: music, syntax, and punnery.

The clues read like descriptions of musical compositions but in fact reference aspects of the listed instruments’ names.

I may have shared this piece previously, but it’s so lovely that I feel it’s worth doing so again. Walter Torgerson’s “Clear Out of Touch with Time”, arranged for flute, oboe, and guitar:

Theme: MAS is added to familiar phrases to wacky effect. The revealer is at 54d “NO MAS!” [“That’s enough!” … and a hint to the origins of the starred clues’ answers]. 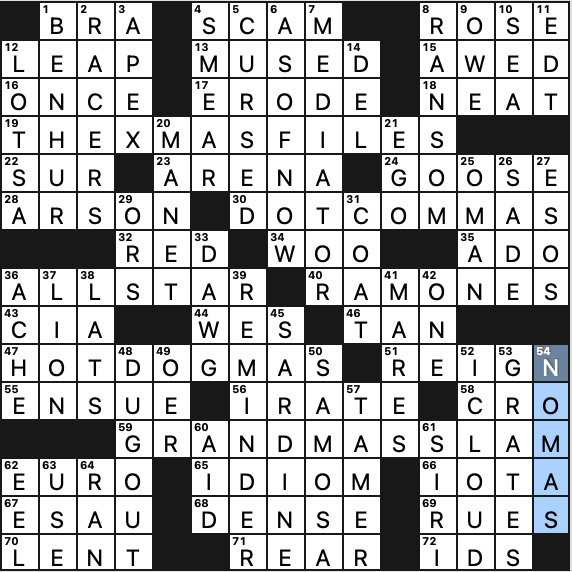 I enjoyed this. Even though I grokked the theme with the first entry, uncovering the rest still proved satisfying. I don’t think a revealer is strictly necessary, given the title, but it doesn’t seem to have impinged too much on that SE corner. Still, it’s odd that the revealer is NO MAS since we’re adding MAS to each theme answer.

The fill is pleasant enough with ALL-STAR, the RAMONES, and SARDINE. The longest fill entries (MEDIATOR and REMINDER) get the job done, though they aren’t especially sparkly. Note that they cross two theme answers each, so the constructor’s choices are limited. I do like that evocative clue for REMINDER: [String around the finger, e.g.].

Theme: Each theme answer contains AID in the middle of the answer, putting a support in the center. 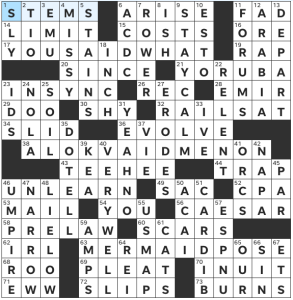 These were three really incredible theme answers. There was such variety. I filled in YOU SAID WHAT pretty quick, and once I got ALOK VAID-MENON, I knew who the puzzle was referring to, though I couldn’t remember exactly how to spell their last name. Plus, MERMAID POSE was so fun and quickly apparent for folks (like me) who aren’t as familiar with yoga poses.

This grid felt really open in its corners, and I loved the way the symmetry made a middle section that really felt like it opened up the center, spotlighting ALOK VAID-MENON right in the middle. Plus, it was a nice bonus feature that a puzzle centered around “support centers” included the word “supports” in its first Across clue 1a [“Leaves’ supports”] STEMS.

Some Friday faves for me:

All in all, I really enjoyed this puzzle!

That’s all from me for today! Have a good weekend! 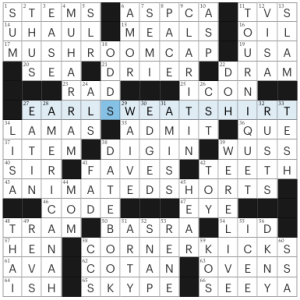 The theme is an outfit one might wear to the office on Casual Friday, from head to toe: A cap on your head, a sweatshirt and shorts, and kicks (aka sneakers) on your feet. These are contained in MUSHROOM CAP, EARL SWEATSHIRT, ANIMATED SHORTS, and CORNER KICKS. The apparel words are all used with somewhat different senses in the theme answers, and each themer is a two-word phrase ending in the apparel. Consistent!

til (Today I learned) the [First month of the Islamic calendar] is MUHARRAM.