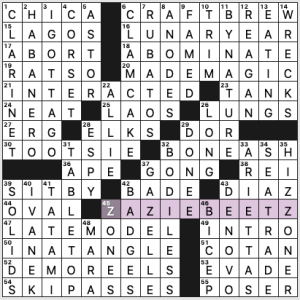 Almost nothing came easily in this 66-word puzzle. A worthy inhabitant of the Saturday slot!

Kevin’s studied piano, so it’s unsurprising to see so much music in the grid: GONG, CLARINET, RUBATOS, ARIETTAS. I needed crossings to point the way on all of these.

Did not know that CLAM CAKEs are a thing. Hard pass. Also did not recall that 22d. [Holden’s brother in “The Catcher in the Rye”] is ALLIE. 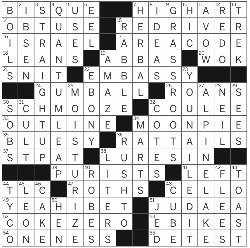 Little time today, so I’ll just say this was a hard one and give a few notes:

At 3:45, this was much harder than the LAT Saturdays have been of late, but not in a way that I really loved — I wished there were more wordplay and less trivia. 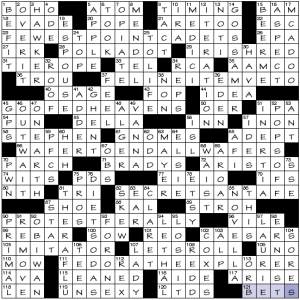 And now I’m thinking of that silly bit with Baldrick from Blackadder. In any case, the chemical symbol for iron, Fe, has been inserted into phrases to wacky effect.

These mostly seem kind of forced to me. Also it feels as if there should be another layer, something unifying them besides just the FE thing. Or perhaps a justification for why we’re fortifying these phrases with iron? 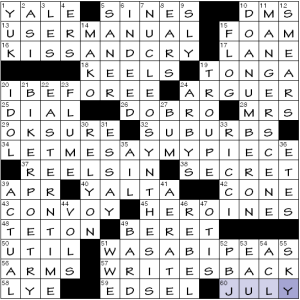 After an underchallenging Stumper last week, we’re back on track with a more ornery offering today.

Was slow going, but I managed to make it across the finish line, after fits and starts as well as some guessing and deducing. That’s how tough puzzles work!

Going to keep it—TIMING!—brief, as there is some housework that needs doing this morning. 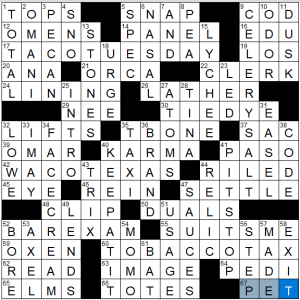 We’ve got a classic hidden word theme, playing nicely to the title in the revealer:

A nice theme set for an asymmetrical grid. I was unfamiliar with Doris Miller; he is the first Black American to be awarded the Navy, Cross for his heroism during the attach on Pearl Harbor. I’m glad to learn about him now.

Outside of the theme, I quite liked CELERY SALT (though I haven’t had a hot dog, Chicago-style or otherwise, in some time), KEEP AT IT (nicely clued by [“Don’t give up!”], and a bit of childhood nostalgia in TRIX. I learned something new from the clue for ELMS — I’d never heard of zelkova trees before — and in discovering that there is indeed a bassist named LOWE [32a Apt surname for a bass player]: I’ve at least found Garry Lowe of the Canadian band Big Sugar. And I’m glad for that — I’m not sure how much patience I have “apt surname” clues given how many more possibilities there are than first/given names. 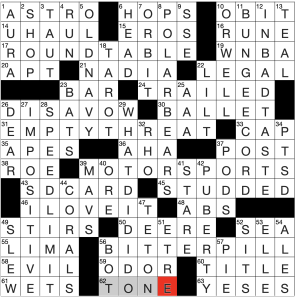 Some fun trivia today too, such as all of U-HAUL‘s trucks having Arizona plates in the lower 48. Had no clue. I’m gonna be looking for sure now. And POLAR BEARS being the largest land carnivores.

Loved the Russian Doll nod to NADIA, though I must admit I keep falling asleep during this last season that was recently released. That’s just because I always start it at bed time. It’s an awesome show.