Hi, all! It looks like this week’s Sunday NYT puzzle is asking us literally to move ON up. Let’s see what fun changes that causes: 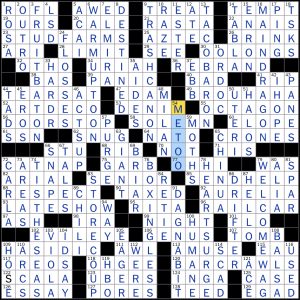 3D: FRUIT BATON [Banana wielded by a maestro in a pinch?]
74D: TIS THE SEAS [Response to “Why art thou queasy?]

9D: TRASH CANON [Give a scathing review of a major camera brand?]
76D: BOXING LESS [What Amazon retirees enjoy most?]

What a fun theme, well-executed theme! In each column of theme entries, the lower theme phrases loses its ON, which moves up to the top theme phrase, creating new, fun phrases in both places. There were so many fun executions of this theme: TIS THE SEAS, HEART SURGE, and WELCOME WAG were easily three of my favorites. What I especially enjoyed about this theme was how cleanly and consistently it was executed. ON was lost every time from the end of the bottom themer and added to the end of the top themer. That level of consistency and attention to detail really makes me smile when solving a puzzle like this, knowing how many great entries the constructors came up with even with that extra constraint.

The themer I perhaps enjoyed the least from a workers’ right standpoint was BOXING LESS, given Amazon’s abhorrent treatment of its workers, but it’s a fun transformation that maybe could have been saved by a clue not related to Amazon? STORE COUP also felt unfortunate because, well, coups these days…  All in all, though, this was a puzzle I really enjoyed and hope you did, too. Can you think of any fun themers that could have worked for this puzzle? Let us know in the comments below!

Ok, that’s all for now. What did you enjoy about the puzzle? Let us know below – and have a great week!

Theme: The last two words of each theme answer can come after “Hit” in a popular phrase. 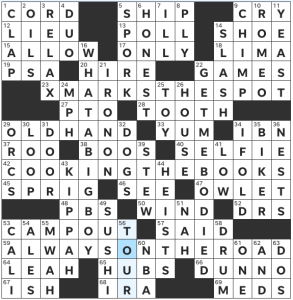 I thought that these were such fun theme answers that were relatively easy to fill in. It took me a bit to put COOKING THE BOOKS into words since I couldn’t remember the phrase, but I really messed myself up in the southeast corner by having ALWAYS ON THE MOVE rather than ALWAYS ON THE ROAD. Once I got AND in there, it helped significantly, and that corner fell into place.

I felt like 16d [“‘He’s grown so much!’”] WHAT A BIG BOY and 22d [“Beyonce song co-written by Solange”] GET ME BODIED were some nice bonus long answers in this asymmetric grid. The middle portion with ORCS / LOOP / DOOR was tough for me since I wasn’t familiar with “A Strange LOOP” and was definitely overthinking “Revolving DOOR” for a long time. I loved both OLD HAND and SPRIG (which I think is such a fun word) here.

A few other thoughts:

So good, so fun! This is a puzzle I could spend hours poring over.

Theme: None! Another meaty themeless grid to sink our teeth into. 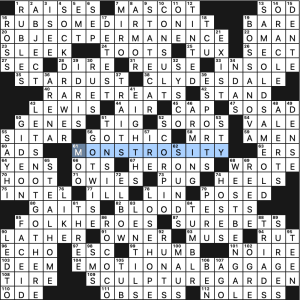 What an amazing set! And there’s next to nothing to scowl about. OTS [When ties are untied? (Abbr.)] is about as bad as it gets (and that’s not that bad).

This is the second freestyle Sunday (here’s the first from about a month ago) and they’ve both knocked it out of the park. If this is what editor David Steinberg has in store for us, we have plenty to look forward to.

Captain Obvious is like that quirky acquaintance that you run into at occasional social events. Like, just when you’ve forgotten about him (and I assume it’s a him… you do too, right?), there he is! Not really someone you hang out with regularly- or even want to at that- just someone you don’t really mind being around. Nice to catch up with and chat for a bit. Then move on with a bit of an eyeroll and an explanation about his behavior to the person who you actually went to the party with. 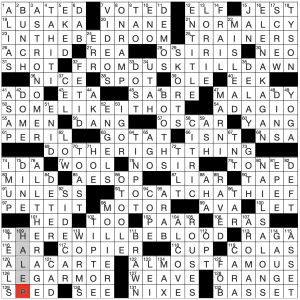 Here’s how literal the clues are: I’d never heard of TO CATCH A THIEF and I still got the whole entry with only the last letter in place from a cross. Captain Obvious puzzles are great for crushing time records in that sense. Really, I got all of the themers with essentially zero help from crosses. Love that or hate that, Captain Obvious is here to stay. I’m firmly in the camp that enjoys seeing him (and enjoys seeing him go when I’m done with him!)

Names in this one stopped me from a steady flight. I guess that makes up for the ease of the themers. Tough/new ones for me included LUSAKA, Chris REA, OSCAR Isaac (I think I’m alone there though… looks like he’s pretty damn famous), IDA Nielsen, Bob PETTIT, LORRIE Morgan/Collins, IGOR Shesterkin, MARNI Nixon, ENID Bagnold (I’ve seen the name more than a few times. Almost there in getting it without help…), Friedrich ENGELS, Simona HALEP, and MAX (I quit on Stranger Things during Season 1, which I regret. I was having difficulty following because, well, I wasn’t paying attention)

The area I found hardest was AESOP (I had AENID- spelled wrong, I know)/ENGELS/TINPOT section.

Was hoping to land in the 8 minute mark once I saw the title. But missed it by a couple minutes. Oh well. I’ll try again next time, when I least expect to see him.

PS- I think it would be fun if Evan hosted a “Draw Captain Obvious” contest. I am really interested to see how people depict him in their mind’s eyes.

THEME: Pieces of a disguise are hidden in common phrases. 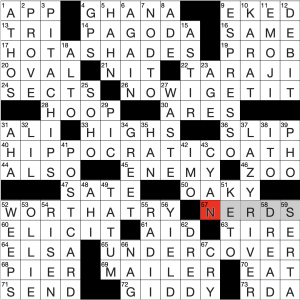 Strange today. Universal is doing the unique-to-Universal “count the letters” stunt, but this time it appears in Across Lite too. Typically, when circles are necessary in order to fully appreciate the theme (as in this puzzle), Universal offers them to Across Lite solvers, but asks the commoners who solve online in their own webapp to mentally count and circle their own letters. Now everybody has to count! Maybe a tacit acknowledgement that it’s unfair/absurd to offer two different versions of a puzzle to people? That said, I have no idea where to find the 15x Sunday grid online. For some reason, they run the Saturday grid two days in a row at Andrews McMeel  and skip the Sunday one altogether. That’s another mind-boggling McMeel thing.

Anyway, this one is standard fare. Checks all the boxes of a hidden word theme- familiar base phrases, word hidden is bridging words in the theme, tight connection between the words. Why isn’t’ this puzzle called Spy Wear?!

TARAJI P. Henson is new to me. Needed every fair cross- glad to see a fresh name though.

Fun fact that I learned: There was a candy called Dweebs? Nerds for the win! 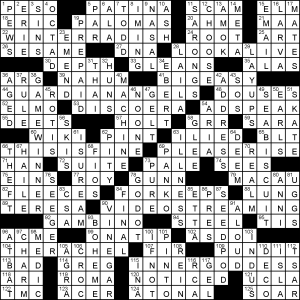 I’m guessing two half by-lines makes a whole for Ms. Iverson? In any case, what I liked most about Amie Walker & Christina Iverson’s puzzle, “Divine Inspiration”, was the revealing answer: INNERGODDESS is crossword platinum! The trickiest thing about a theme like this, much like the fictional monster theme some months ago, is you want to try and be as broad in your cultural net as you can, while still making sure you don’t lose too many solvers. Today, we have KALI from Hinduism, ISIS from ancient Egypt, and then HERA, ERIS and EOS from ancient Greece and TERRA and DIANA from ancient Rome, probably originally Greek in any case. Not sure what other non-Greco-Roman options were on the table? Sedna? Amaterasu is kind of difficult to hide! As too, Ishtar, Astarte or Pachamama and even the double GG of Frigg is tricky! So, in sum, I’m guessing the main reason for the preponderance of Greeks and Romans is that they had short punchy names for their deities!