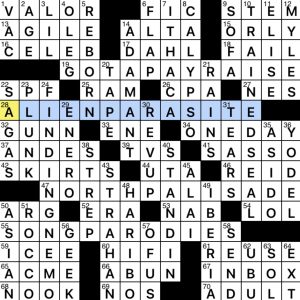 Hello everyone! This week’s theme involves eight-letter words and phrases that are one letter away from being anagrams of PARADISE: 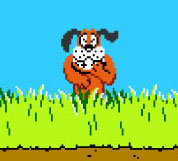 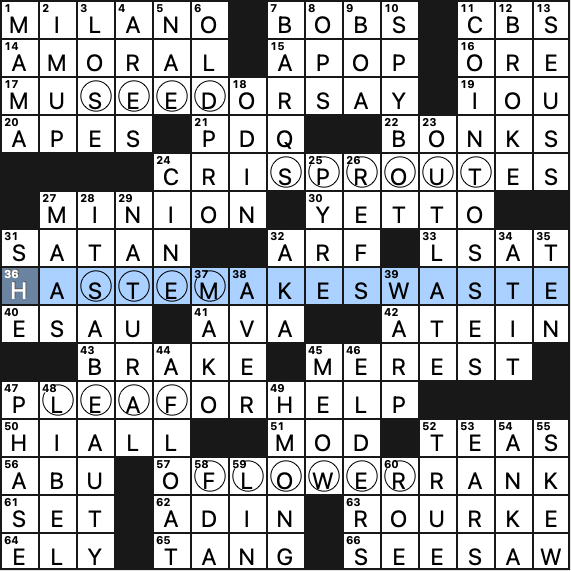 This is a pretty ambitious theme because each of the hidden words is at least four letters long, with two of them being six letters. Further, the theme entries are in growth order—from SEED to FLOWER—so they’re cemented in place and can’t be moved around. Kudos to the guys for making the theme work.

That said, these aren’t all exactly in-the-language phrases. I’ve watched a lot of football in my time, and maybe I’ve heard the phrase CRISP ROUTES in passing, but nowhere near enough to make it stick. A “call for help” seems far more common than a PLEA FOR HELP (Google’s ngram viewer backs me up), and OF LOWER RANK feels manufactured. I’d’ve been fine with OVERFLOW ERROR (a computing term) for that last one; it’s at least as good as CRISP ROUTES. (But then that would mean having 13-letter entries as your first and last theme answers which would make construction even more difficult.)

Ambition in a theme translates into constraints which result in crosswordese and iffiness in the fill. Yes, there’s some here like partial YET TO, weird plural MAAS, and ELY Cathedral. And I’m not sure that “IT’S A BEAUTY” is something people actually say. But there are highlights as well: COIN TOSSES, MINION, NATURAL, MILANO, and HMONG.

Ambitious theme results in some compromises, but it works. 3.5 stars. Oh, and it’s a debut for Joe O’Neill, so congrats! 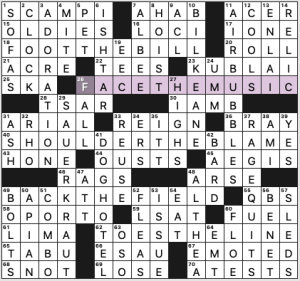 Sometimes you just have to head the project, and “[body part] the [X]” phrases are today’s theme:

Fave fill: SAUERKRAUT, DOG HOTEL (it’s wild that Don Cheadle is in both Hotel for Dogs and Hotel Rwanda—I like to call these his “Hotel” movie franchise), RAGE-QUITS.

Overall, the fill feels better suited to a Wednesday puzzle or beyond. IONE TSAR OPORTO APIAN EEC? Also a smattering of fill best-known to the older generations of solvers: A-TESTS, ENLAI, BIL KEANE. 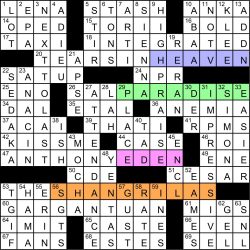 Hello there, everyone! Some serious heat is either upon us or on its way, depending on where you’re living, and I hope you all are stay and beating some of that heat now.

From the second I got the second and third entries, I kind of feeling of what was going on, but the reveal is just absolutely magical and one of the better ones I’ve come across in doing crosswords. In the grid, the first three theme entries are multiple-word answers in which the final word is an idyllic setting. The final theme entry, THE SHANGRI-LAS, acts as the earworm-inducing reveal (53A: [“Leader of the Pack” pop group of the ’60s…and an alternate puzzle title]).

The reveal was amazing, as I said before. Also, how about the SIX other 10-letter entries that were not part of the theme?!? Very IMPRESSIVE, indeed (31D: [“What an accomplishment!”]), and definitely worthy of HIGH PRAISE from any crossword solver (9D: [Top accolades]).  Seeing GUST made me think about how I recently learned the term “gustnado” from a friend in Arizona who was telling me about some of those tornado-looking whirlwinds that has wreaked having there in the past (57D: [Sudden wind]). No matter what puzzle it is, I’m always hesitant to type in the final two letters for a five-letter entry meaning goodbye, with ADIEU and “adios” being options, and I usually always initially lean on the latter to start (4D: [“Farewell!”]). Not time to say “auf wiedersehen” just yet, so I’ll leave you with this…

“Sports will make you smarter” moment of the day: TORII (15A: [Shinto shrine entrance]) – Though not named after the shrine entrance, former Major League Baseball player Torii Hunter stood out for his play of the field, and he put up close to Hall-of-Fame numbers by the time he retired after the 2015 season. Hunter was best known for his amazing defense in center field, as he won nine consecutive Gold Glove Awards between 2001 and 2009, playing mostly with the Minnesota Twins in that span. He was no slouch at the plate either, amassing 2,452 hits, 353 home runs and 1,391 runs batted in. Given that the Major League Baseball All-Star Game is tonight, here’s a clip of, almost certainly, the most memorable play in Hunter’s career: robbing Barry Bonds of a home run in the 2002 All-Star Game played in Milwaukee. (Yes, the game that ended in a tie.)

Today’s theme is wacky and fun with one entry that seemed a little tough for a Tuesday. There was no Fiend tag for Nancy – I think this is a debut. Whether or not it’s her first puzzle, I look forward to seeing more from this constructor!

Each theme entry has a word for “goodbye” rhymed with an animal. The clue tells us what language we’re looking for. 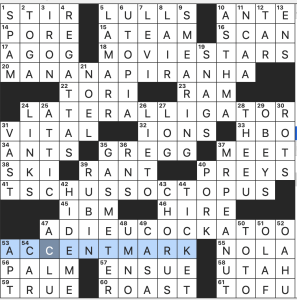 So I have a couple of fairly minor complaints that didn’t get in the way of my enjoyment. Fun, fresh, original theme!

That’s it for me – have to run. No rest for the retired! 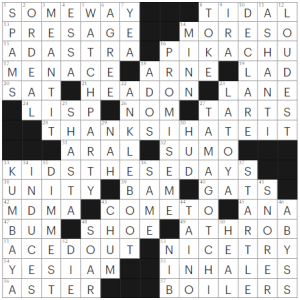 The two marquee entries are sort of like flip sides of a coin, for different ages:

And by flip sides of a coin, I don’t mean that they express the same sentiment—just that they will likely have different resonances for different demographics.

Tuesday crosswords at the New Yorker are billed as moderately challenging, and they do seem to be pitched at about the same difficulty from week to week, but they aren’t really too tough for us fanatics.

THEME: Two grid entries are repeated five times over, but one appears sans RE- as a prefix, though it is clued as if it is present. 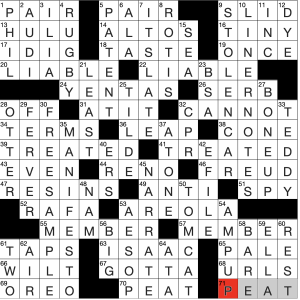 Cool puzzle! Love this idea, and it’s bound to delight solvers who haven’t been introduced to those “Thursday” type themes that Universal gently sprinkles in here or there. You know, puzzles that break the rules a bit.

Very interesting to see themers in rows 1 and 15, which is rare I think in a standard themed 15x. I was quite stumped on 5A [Fix, as Bob the Builder would] when I had PA?R. But then, the lightbulb AHA moment came quick once I peeped the title.

I completely understand what the clue is going for in the reveler: [Do over, and a hint to the two letters missing from the starts of (the five themers… including this entry)] but it’s really hard interpret the directions literally. It just winds up hurting my head. Instead, I just think Yeah… I get it and accept that it makes sense to people wiser than I. Sorta like the whole premise of Back to the Future. Just accept, and enjoy the movie. Don’t overthink all the weird plot holes and paradoxes that automatically come with Time Travel motifs.

Fill was fine. Unremarkable for the most part. I DIG a FREE SAMPLE at Costco myself once in a while. AT A (clued as a partial here) is rough fill to swallow.

Really liked the-puzzle and the idea overall though. 4.5 stars.

A fun, asymmetrical puzzle with lots of great fill! 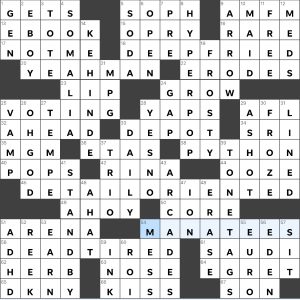 Theme: themers are contained within the word DEED, hence the title “Indeed”

My instinct was “on a stick” because that’s what the Minnesota State Fair emphasizes but DEEPFRIED with my second guess. DETAILORIENTED filled in easily for me, despite being DEADTIRED myself and it’s only Tuesday. Let’s hope that everyone gets a good night’s sleep tonight!

Stumpers: YAPS (I tried “bark” and “yips” first), TONETAGS (needed crossings, as this was new to me), and LINED (hung up on “grid” for some reason)

Overall a fun puzzle with lots of bonus fill and wonderful entries and cluing. I was racing through it until the bottom half, then I started to slow down but keep filling things in here and there, making steady progress with crossings except for the east section. PYTHON was not one that I could fill on its own, and many of the crossings weren’t filling in for me either. I only had SRI in that section for the longest time. Even OOZE evaded me, as I always think of as “slow” as molasses so couldn’t get past that strong reference. Interestingly, the “f” in AFL and FROZE was the last letter for me today, though looking that section over again now, it doesn’t seem like it should have been as hard as it was for me and that the cluing was more than fair.

How’d you all do with this one today?